Hmm. I Wonder If He's Placed that Bulk Order for Brown Shirts?

The Great Orange Beast has thrown down the gauntlet to the Republican establishment. If he's denied the GOP nomination at the party's convention, his supporters will take to the streets.

In an interview with CNN on Wednesday, Mr Trump said the party could not deny him the nomination should he fail to win enough delegates.

In comments likely to raise more concern in the Republican establishment about Mr Trump's lack of experience and temperament, the former reality TV show host said he was for the most part his own foreign affairs adviser.

"I'm speaking with myself, No. 1, because I have a very good brain," he told MSNBC's Morning Joe show. "I know what I'm doing. ... My primary consultant is myself."

Voters have roundly rejected the moderate wing of the Republican Party – often represented by the likes of previous presidential nominees Mitt Romney and John McCain – in the 2016 campaign, although it is still a powerful force in Congress.

Threats of violence, rioting in the streets. Why does that sound so familiar?

Recently PBS featured a Trump supporter in a news item. The woman had tattoos on her arms and hands. One hand has "88", the other has the Celtic cross.
Both are white supremacist symbols. 88 is the symbol for "Heil Hitler" 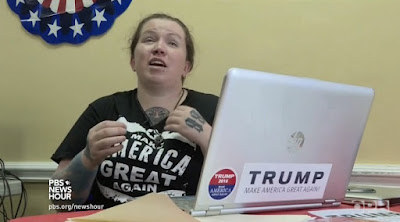 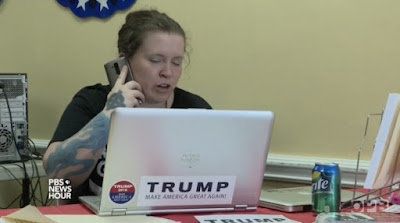 OK; this woman has tried to camouflage her body!
She may hold strange views upon life but what party does not have it's weirdo's?
Again; one person does not make a movement.
Like it or not Trump is a very clever operator.
He knows what button to press to gain support.
He is all over the place with his statements (to gain support) I don't think anyone can really say what , or not , he stands for.
It is becoming really hard to disagree with his stand on international trade agreements ( other than his clothing line is made in China)
Like all politicians he spins the truth; remember Vanderslam and the everyone should be able to afford a beer on Friday!
They ALL lie it's up to the voters to sort between the wheat and the chaff.
Trumps chaff remains an enigma but an interesting one.

Our Canadian experience with a leader who was his own consultant ended after a disastrous ten year experience this past Oct 19.

Since Americans never rely on anyone else's opinion or advice, preferring to step out on a new path as if the only history of importance the world has ever known is American, that highly revisionist pap they are fed to keep them uninformed but convinced of greatness and exceptionalism, is any of this Trump drama really surprising?

Seriously Brown shirts, have you seen that hair, they are going to be orange.

Anon 9:12 - that's not what anyone, save you, would call camouflage.