It Had to Come to This 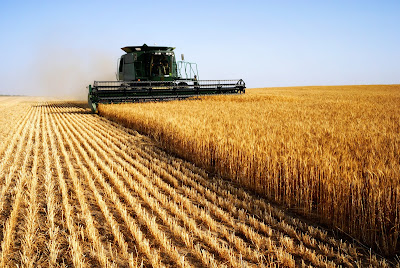 One thing the free traders never raised with us was the day when other countries would try to lock up our farmland. It's called "food security" and, while you haven't given it much thought, it's been weighing heavily on their minds.

We haven't paid much attention to it because so far it's been going on mainly in the Third World. Foreign companies show up, get their hooks into the best farmland available, and begin exporting agricultural production to their home markets.

The countries that were the easiest pickings were those that never had any proper land titles system. A farmer might have worked land that had supported his ancestors for generations but, without some registered title, he was little more than a squatter easily tossed off his ancestral lands by often corrupt government officials who sold him out. Wait a sec, that sounds like the Highland Clearances.

What makes this especially egregious is that these land dispossessions are often happening in poor countries that already have a food insecurity problem. These include nations that endure periodic famine to which the world community responds with food relief.

It's not just the handiwork of China. It's all sorts of countries that are cash rich but land/food poor. The Middle East for example. Britain grows a lot of its off-season delicacies in food insecure Kenya.

But now, predictably, they're coming for us. They're using a more sophisticated approach, one that's far more subtle. Instead of buying the land directly, openly, alarmingly, they simply take over the Agri-business giant that already owns the land*. It's not all that much different than how they got us to offshore our industrial base only the factory stays here.

Fortunately, while the Canadian government snoozes in its free-trade blanket, the Americans are sitting up and taking notice, sort of.

In November 2015, China National Chemical Corp (ChemChina) entered talks to buy the Swiss-based Syngenta for $41.7 billion. Subsequently, ChemChina increased its offer to more than $43 billion. This is the largest overseas acquisition by a Chinese company to date.

In February 2016, Syngenta agreed to the offer from ChemChina. The deal still needs the support of Syngenta’s shareholders and regulatory approval, especially from the U.S. government, given Syngenta’s large presence in the U.S. market.

While there are already security concerns in the U.S., particularly among agricultural officials, about the deal, it is quite unlikely that the U.S. will block the deal. The Committee on Foreign Investment in the United States (CFIUS) has never before blocked a deal on food security grounds. For instance, CFIUS approved Shuanghui’s takeover of Smithfield Foods, despite concerns in the U.S about the implications for America’s food safety and security.

The Sygenta case is about China gaining access to the latest GMO technology, ostensibly to overcome some of its agricultural problems at home. But China has other plans.

* Recently a Chinese firm tried to buy up a large tract of ranchland in Argentina. The government responded with restrictions prohibiting foreign ownership of Argentinean agricultural land. China then responded by simply acquiring a controlling majority of the shares in a major Argentinian cattle company. Problem solved - for now.

It's time that Canada woke up and looked ahead to what our world could be like in 2050 and beyond. We need to treat our resources - our water, farmland, agricultural production - as strategic assets to be protected against the worst impacts of globalization. The time to get that underway is now.

Could this be next? It's not only Argentina's ranch land that's in peril. China is now sending its fishing fleet into Argentinian waters. This led to a confrontation between the Chinese fleet and Argentinian coast guard vessels that ended in the sinking of one Chinese trawler. The Argentinians rescued four of the Chinese crew, the rest boarded another Chinese fishing boat.

This has been going on for a while particularly in Africa.
Much of what we call Cod fish is a generic term for much of the white fish we eat.
Your Vancouver fish and chips could well be white fish caught off North Africa.
China have a huge investment in starving Africa to supply food to the home country.
I have not figure it out yet, but could the Chinese money laundering in Vancouver real estate be tied to the future supply of Canadian resources to China?
Gwynne Dyers Climate Wars is coming to pass!

Re Argentina sinks Chinese fish boat.
I don't think that most people realise just how far away from home that fishing boat was!!
Smacks of what I said about OUR fish and chips..

I was looking at some OECD documents the other day, after finding it IMPOSSIBLE to find facts on the DFO pages about the relative size of the East vs West coast fisheries. The East coast fishery is FOUR times larger, according to the OECD.

For years, the white fish in fish sticks, fake crab and what have you round here in Halifax was pollock, processed locally. Down at Cap'n High Liner HQ in Lunenburg, NS, they no longer process ANY Canadian fish. That's correct. Go to their website, and it's all Alaska and Russian fish processed in China. No more High Liner frozen rubbish for me! Despite their assurances, I have zero faith in Chinese fish processing - too many terrible stories easy to find on the web.

Meanwhile, in Sobeys and Loblaws/Superstore, we quite often get offered frozen haddock fillets. These turn out to be Greenland and Iceland haddock, sent to China for processing and sent back here. No matter how carefully you defrost them, they are waterlogged and flavourless.

However, we are lucky around here to be able to obtain local fresh groundwater haddock at many locations. You have to be aware enough to know which day the fresh fish arrives, and not buy three day old product. Some restaurants even use hand-caught fish. Had some fresh haddock tonight - superb. At certain times of the year we can still get fresh local cod. When really fresh, nothing's better to my personal taste.

Growing up in the Digby NS area, we just used to go down to the wharf to buy fresh fish, haddock, cod, halibut, scallops. Back in 1960, pollock were so numerous eating the offal from fish processing plants, the water boiled with them, big 'uns; as kids we used to gaff a couple of 15 or 20 pounders and take 'em back upstairs and get two cents a pound for them. Enough to buy pop, chips and chocolate bars on those sunny summer days bicycling about. Remember the nickel? That's what such stuff cost. Too messy to do every day though, gaffing pollock covered in fish guts! Only did it at high tide and a few hundred yards away you could wash off the smell in fresh seawater.

Not many people liked them as they are a fishy fish, but flounder "fishing", catching them at high tide down Digby Neck in the bay at Freeport, you just needed an alder stick to stab them as they boiled in the surf at water's edge at high tide. Easy to clean and a great fry up for lunch if the tides corresponded with meal times.

In 1980, just as though a switch had been flipped, inshore pollock disappeared. Fish plants began to close, catches of all kinds dropped. You never hear about that, all you ever hear about is the collapse of the cod fishery. Several years later, no more flounder either, flapping like crazy in the surf. The cause, who really knows? Flounder weren't a commonly targeted species so overfishing seemed unlikely.

That reminds me of an article I read recently about British-caught fish being shipped to Thailand for processing and return, winding up on UK grocery shelves.