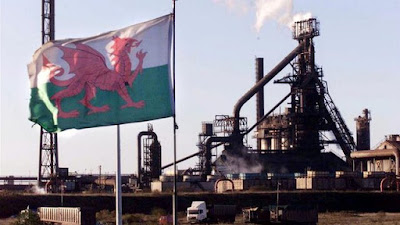 The era of globalization has created a serious problem - control of strategic resources. Britain is now confronted with the issue due to the decision of a giant, Indian transnational, Tata, to shut down the UK's steel production industry.

...this week’s decision by Tata Steel to pull out of all its UK operations is simply the latest in a long series of blows that have reduced Britain’s steel industry from the world leader to the fifth largest producer within the European Union.

Tata’s decision is nevertheless a body blow to steel in the UK, with wide industrial and political implications. The threat to 4,000 jobs at the UK’s largest steelworks at Port Talbot, a community which is synonymous with the steel industry today in the way Jarrow was with the shipyards a century ago, is existential. But the closure of Tata’s plants, if it goes ahead, could threaten at least 40,000 jobs nationwide and help to make a mockery of the “active and sustained industrial strategy” which George Osborne advocated as recently as last November.

...Global market power in steel production has shifted decisively to China, while decades of underinvestment and a long-term decline in UK steel’s international competitiveness cannot simply be dismissed as unimportant, least of all at a time when public money remains tight. Tata, after all, is a company with a record of trying to take the long view. It invested in a new blast furnace at Port Talbot. But steel’s cost base, especially the prices it had to pay for energy, left it vulnerable to the glut that has followed the slowdown of the Chinese economy. China’s readiness to unload steel on global markets at marginal cost knocked the floor out of the industry elsewhere, including in the UK.

What do you do when a foreign company shuts down a strategic industry such as steel making. It's not just a matter of lost jobs and industrial activity. Some industries, once shuttered, can be difficult or even impossible to restart later. Yet such is the vulnerability often inherent in globalization. Some other country, not particularly like-minded, can gain control of your strategic resources
Posted by The Mound of Sound at 12:24 PM

Exactly. Globalization is inevitable but not-so-free trade deals aren't. We have to tear them up.

but its economicly beautiful

A good example Mound of how Global Neoliberalism doesn't work. Having a foreign corporation control a major industry like steel is risky business. Toby is right. those "free" trade deals should be torn up and rewrite REAL trade deals.

This is economic justice and retribution at its best. To hell with the British. How much did they make India suffer over the last century or so? It's their turn to swallow the bitter pill of revenge.

Anyong said....That's it! Everything in a nutshell. Revenge....the answer to everything.

4:37. That's it! All in a nut shell. Revenge is the answer to everything. Submitted by Anyong.