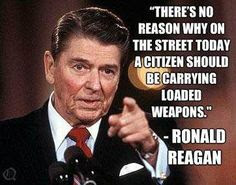 A group is petitioning for permission to exercise their God-given, Second Amendment rights at the Republican Party convention.

Americans for Responsible Open Carry launched the petition which had gathered 12,000 signatures yesterday. I'll betcha it's a lot longer today.

According to the GOP’s policy on their website, “firearms and other weapons of any kind are strictly forbidden on the premises of Quicken Loans Arena,” where the convention will be held.

The petition claims that “Cleveland, Ohio is consistently ranked as one of the top ten most dangerous cities in America.”

But, “This doesn’t even begin to factor in the possibility of an ISIS terrorist attack on the arena during the convention. Without the right to protect themselves, those at the Quicken Loans Arena will be sitting ducks, utterly helpless against evil-doers, criminals or others who wish to threaten the American way of life.”

The petition also notes, “All three remaining Republican candidates have spoken out on the issue and are unified in their opposition to Barack HUSSEIN Obama’s ‘gun-free zones.'”

It seems reasonably likely that this year’s convention, from July 18-21, will be a brokered one as the Republican party has schemed ways to prevent the current front-runner, Donald Trump, from securing the party’s nomination.

This has prompted Trump to say that there could be resulting violence if he is in fact denied the nomination.

What better way to select a redneck party's presidential nominee than a mass shootout on the floor of the Quicken Loans Arena.

I heard one Republican, possibly Lindsey Graham, suggest the ballot should incorporate a "none of the above" option that, if it got the most support, would trigger a fresh nomination campaign.
Posted by The Mound of Sound at 8:10 AM

No, Rumley, Republicans with guns kill people. Without guns they're as timid as field mice.

As long as the doors are locked from the outside when the shooting starts I'm OK with it.

I often have to drive to the states from Manitoba to Minnesota or North Dakota on business. I never feel comfortable and avoid going to the U.S. as much as possible. As soon as I cross that border I feel vulnerable I mean these states are pretty innocuous (unless you watch Fargo). I feel sorry for anyone who lives there!