Russia Pulling Forces Out of Syria 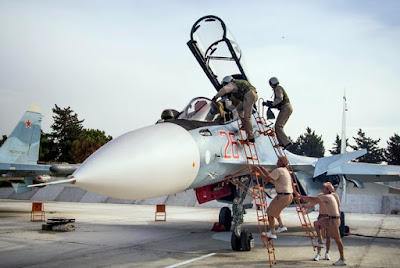 It sounds as though we'll have to rejig the "bad Russian" narrative.  Vlad Putin has directed his war czar (defence minister) to withdraw Russian forces from Syria. According to Putin, their job is done.

“I consider the objectives that have been set for the Defense Ministry to be generally accomplished. That is why I order to start withdrawal of the main part of our military group from the territory of the Syrian Arab Republic starting from tomorrow,” Putin said on Monday during a meeting with Shoigu and Russian Foreign Minister Sergey Lavrov.

Russian forces will remain to man the airbase and naval port already in operation but most combat forces will be withdrawn. What's unsaid is that they can return probably on a day or two notice.
Posted by The Mound of Sound at 11:43 AM

Whatever you think about the overall wisdom of the Russian mission, it is instructive that its goals and scope were defined beforehand (defeat jihadi rebels, secure Assad's territory), that measuring its success or failure was possible (jihadis killed, and territory gained), and that it was possible to exit the mission (soldiers exit arena, and hand over security to Assad).

You've got that right on the numbers, Chris.

Russia is just removing its ground troops, I believe. CBC TV's Susan Ormiston offers clueless commentary as usual, needs to consult a map if she thinks Syria is far distant from Crimea/Ukraine. Years on the job, appears clueless on everything including map reading.

What Vlad managed was to expose what a patrician twit Kerry is, and outflank him with ease. We're constantly told there was a broad-based uprising against Assad. Funny how he seems to have no problem finding Syrian troops for his army, nor to stay in power. I regard the usual US press releases painting him as evil incarnate a complete joke - they fomented the uprising as he was a bit of an independent. Well, we can't have that, now can we? He's no saint, but neither is the US. And as for the idiot running Turkey, read this, it's actually half way decent:

We get fed such utter tripe 99% of the time about the Syrian situation by the MSM, we might as well be mushrooms. And Turkey? Duplicitous. Not only that, some Turkish professor wrote an article a couple of days ago on iPolitics warning Trudeau that backing/training the Kurds will be remembered in a negative light by Turkey. Erdogan is pathologically anti-Kurd, that overrides everything for him. Read that Grauniad article.

What Canada is doing farting around over there in the first place is beyond me - but then harper sent us in swaggering away with visions of glory bouncing around in his idiotic head, and JT hasn't the wit to get us out either. Who needs getting mixed up in a US imbroglio, and all the nitwit countries and factions having a good old religious ding-dong war of hate? Oh, I know, 'cuz of ISIS, ooh - they're just the Northern Sunni Iraqis who rebelled from the Shia Baghdad government, now trying to grab a piece of land and idiotic enough to be extra-barbarous on camera, meaning, don't mess with us 'cuz we're real nasty.

What a mess. The analysis we get on regular news sources just seems to repeat biased US utterings, and they back both sides at once. Now the Saudis gave Al Nusra (al Quaeda) part of the so-called "moderate" rebels against Assad, thousands of US TOW missiles, approved by Kerry. Great, what brilliance of mind. Well, that missile deal is on MSM, because Kerry.

I mean, come on. The Sauds fund ISIS too, and Turkey buys their oil by tanker truck convoy from Northern Iraq. It's a complete clusterf*ck.

Read any of this in the Star recently? No, you have to go and dig elsewhere. Vlad stuck it to everyone this past five months. Probably laughing his head off. Withdraw troops suddenly in the middle of cease-fire talks just like that and watch Kerry's head bobble. Screws with his mind, which ain't that sharp to begin with.

We got to get out of there. Pronto.

At least the Russkies were actualy fighting ISIS instead of arming them and turning a blind eye to our allies tacit approval.


@ BM. You and I are on the same page in this mess. "Whack-a-mole" warfare. As for Erdogan, I continue to be amazed that his generals haven't sent him packing for endangering the nation's secular democracy, the legacy of Ataturk.