And So It Begins. Big Oil Wants Ottawa's Money for Well Cleanup. 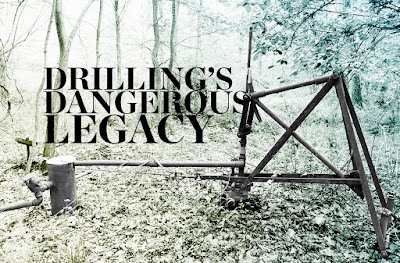 The Petroleum Association of Canada would like Ottawa to cough up half a billion dollars to clean up inactive oil and gas wells in Alberta.

Mark Salkeld, who heads up the association, said as of January of this year there were more than 75,000 wells that need to be decommissioned across the province and the sums being requested would cover a small fraction of the task.

"The oilfield services sector is hurting really bad right now and this is a very good program to put people to work," he said.

He said it’s not typical for member companies to seek a government handout.

"In reality, we weren’t comfortable asking for money," he said. "We don’t want to be see in the wrong light."

But given the plunge in industry investment, the tens of thousands of layoffs in the oilfield services sector and the risk of companies disappearing completely, Salkeld said such a move makes sense.

Salkeld calls the proposal a "win−win" — easing some of the economic pain while addressing an environmental challenge.

Oh yeah, and we'll need a little extra to clean up those Athabasca tailing ponds.
Posted by The Mound of Sound at 2:37 PM

so the job creators
that according to the same oil industry
got 34 billion in tax relief and grants over the last ten years
to create jobs and didn't
now needs 1/2 billion to do a job
they should have figured in to the cost of the job?
meanwhile 1/2 the value of most canadian companies just a year ago
was all cash in a company account they said

ya, I'll get right on that. NOT ONE DIME FROM MY TAX DOLLARS. They made the mess they can pay to clean it up. If they don't, pursue them through the courts until hell freezes over.

We have a lot of homeless to shelter, medical facilities to build, bridges to repair, etc. the oil business liked to keep the money they made, now they can keep the mess they created and deal with it themselves. They can rot in hell.

Did you read how much money they need to clean up the mess?..and I quote..

"PSAC says there are 75,000 inactive wells in the province requiring downhole wellbore abandonment and surface reclamation. The cleanup could cost as much as $82 billion but current industry cash flow for 2016 is estimated at $26.5 billion, it stated"

These corporate leeches must be watched very carefully. They are not talking about abandoned wells or reclamation. They're talking about using public dollars to shut in wells that aren't profitable for them to continue to operate. Unless government take back these wells industry will be back to suck out whatever will make THEM a profit under better financial circumstances. Or they'll get Alberta pay to shut them in and sell them to whoever can buy and hold for future production. Either way, we can rest assured that taxpayers lose and industry wins. As it has ever been.

I wondered what you thought of this:

Quote:
"The whole ponzi scheme of the developed world is to keep GDP growth increasing via a wealth effect."

What else is new? They made billions with money from we tax payers to start them off and now we have to clean up their wells? I'll be dammed....what a good thing that is!!

Wait till we get the bill to clean up the tar sands.

@ Hugh - sorry, but anyone who has to shout into a microphone is of no interest to me. This is the sort of stridency so popular with American 'open-mouth' broadcasting that, collectively, has so powerfully misled, confused and inflamed so many Americans. I give this crap a pass.

@ Linda. Thanks for your helpful insights. You have shone a valuable light on this matter.

@ Bill. Yes that was in my mind when I first read the article. We've already had the head of CP Rail pronounce the Tar Sands over, dead, never to return as we knew them or once projected in the future.

As I understand it, Alberta levied a site remediation charge on the energy producers but it was a paltry 10% of actual projected costs. That led some, such as Andrew Nikiforuk, to warn that we were setting ourselves up for a situation in which the producers simply pull up stakes and go, leaving the clean up bill to the
federal and provincial treasuries.

But with this statement,

"The whole ponzi scheme of the developed world is to keep GDP growth increasing via a wealth effect."

isn't he identifying our central problem?