Shifty Heads For the Trough 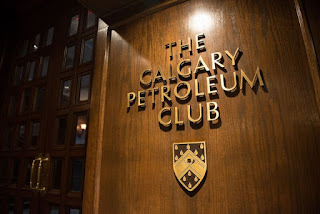 You might not care for Shifty Steve Harper but that doesn't mean he doesn't have friends and admirers and the closer you get to Calgary the more you'll find of them.

It really wasn't a matter of if but only of when Shifty would be inducted into the petro-Hall of Fame, the Calgary Petroleum Club. As for now, he's in. Well, he's earned it. No question there.

And he also got an in at the less well known Ranchmen's Club.

The Ranchmen’s Club describes itself as “the private club of choice for excellence in service, dining and activities.” It’s the kind of place where jeans, ball caps, running shoes and T-shirts are strictly considered “inappropriate attire at any time.”

Located in downtown Calgary, the club has a membership that includes lawyers, bankers and businessmen, its website says.

- The Calgary Petroleum Club, or CPC, is not officially affiliated with the Conservative Party of Canada, or CPC, or the Communist Party of China, or CPC. That's just an ugly rumour and nothing more.

I understand that Peter Lougheed was kicked out of the Calgary Petroleum Club, Mound. He did not favour rapid development of the oil sands.


I wasn't aware of that, Owen, but I looked it up and indeed Lougheed's honorary membership was rescinded in 1973. After Klein took over the Alberta Tories were the water boys for the CPC, a merger that brought that province exactly nothing lasting or worthwhile.