Calling a Spade a Shovel 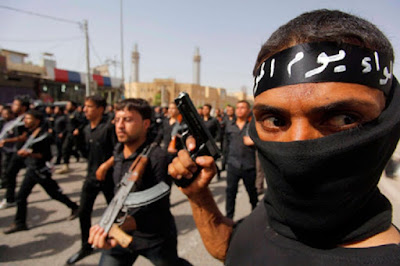 Now this is a breath of fresh air. An essay at the Brookings web site hits the nail on the head. It doesn't obscure the problem as Islamist radicalism. No, it uses a more focused term - "Sunni militancy."

And we single out Shiite Iran as a state sponsor of terrorism.

And who are we arming to the teeth just as fast as they can turn their oil into greenbacks? The Sunnis. You can't blame them for thinking we're the dumbest assholes on the planet.
Posted by The Mound of Sound at 2:40 PM

In the ME, Persians are the sole viable competitor/challenger for supremacy in the neighborhood...
A..non

I am presently reading Balkan Ghosts by Robert Kaplan. All the while I'm reading the back of my mind says Middle East; it's the same dysfunctional mess. According to Kaplan modern terrorism originated in Macedonia. For some reason, Western powers keep meddling with no long term benefits. The obvious is oil but that can be purchased without warfare. My suspicion is that Western powers are terrified of a powerful Arab block, thus destabilization forever is the long term strategy.