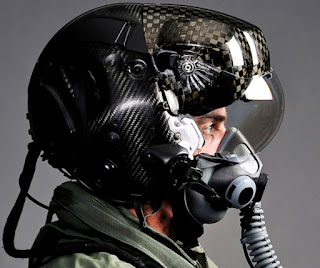 You would think at nearly half a million greenbacks per copy, you might get a helmet that wouldn't break the pilot's neck if he had to get out of Dodge in a hurry.

The current Generation III helmet, which acts as a heads-up instrumentation and night vision display for the pilot, was discovered last year to be so heavy that it snapped the neck of smaller test dummies during ejection testing.

The Gen III helmet, which is essential to the operation of the F-35 in all its variations, has pushed forward the art of augmented reality. Combined with optic and infrared sensors on the aircraft, it essentially allows the pilot to look through the plane—a feature much desired by the Marine Corps for precision vertical landing of the F-35B. It also allows pilots to track, designate, and fire weapons at targets by looking in their direction—without having to turn the aircraft toward them. But the helmet has encountered multiple growing pains, including problems with image "jitter" early on in testing that could cause pilots with the strongest of stomachs to get motion sickness.

The mass of the approximately 5-pound, $400,000 Gen III helmet could push the pilot's head down during the acceleration of ejection and cause both neck and back injuries to pilots. When combined with the sudden forces exerted by the opening of the ejection seat's parachute, particularly when the seat pitches to the point where it is nearly upside-down when the parachute opens, it could be enough to break the neck of lighter pilots.

As a result, pilots under 136 pounds have been barred since last fall from flying the F-35 Lightning II, and the JPO has acknowledged that pilots between 136 and 165 pounds face an "elevated level of risk" of neck injury.

And so the search is on for something lighter, somewhat less lethal. Lockheed is also working on slowing the ejection seat and providing better support for the pilot's head. Good one, fellas.

there ought to be a law against bad helmets. Oh, there is, just not for pilots. We might want to ensure those pilots get out safely. Not only do they have friends and family who care about them. it costs a lot of my tax dollars to train them. I'd like to get my money's worth/

These seats are inherently dangerous. In the 104 you had to strap stirrups to your flight boots. They connected to cables in the seat. At the first ejection detent those cables pulled your feet tightly back against the seat. That was all that kept your legs from being ripped off as you exited that ridiculously small cockpit. However, in fairness, it did feel very studly to be walking around in stirrups.

they are called drones. a fleet of cheap drones costing less than the helmet would overwhelm most defences

We are overwhelmed by bullshit.
Aircraft that are substandard, hydro electric dams we don't need, bankrupting BC Hydro to balance the budget,Bankrupting BC Ferries to balance the budget, Fracked gas that is uneconomical to produce without taxpayer subsidies, Eroding environmental considerations to promote forestry, Eroding environmental considerations to the fishing industry,eroding environmental issues concerning freshwater delivery, etc etc.
Need I go on?
The crux of the matter is sustainability !!
What can we do to sustain the ecological system and life?
NO political party will touch the subject , even the Greens, as it requires all of us to do with less not more or even the status quo.