The End of Neoliberalism? 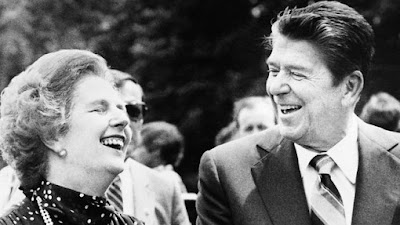 Fortune magazine ponders whether neoliberalism in its home country - the United States - can survive the November elections.

Neoliberalism ...is an economic principle. It refers to the belief that markets should be frictionless and unfettered by things like regulation or organized labor. Neoliberalism has its roots in the Chicago School of economics pioneered by Milton Friedman in the 1970s. The concept found its footing in the 1970s and 80s, with champions like Chile’s Augusto Pinochet, Ronald Reagan, and Margaret Thatcher. It then evolved into a basic economic outlook for major political parties in much of the Western world. Neoliberalism’s stature reached new heights in the 1990s, when President Bill Clinton signed the North American Free Trade Agreement and British Prime Minister Tony Blair created the “New Labour” movement, moving the Labour Party away from its trade union roots.

This is the world that British journalist Paul Mason addresses in his book Postcapitalism: A Guide to Our Future, Mason ...argues that the current iteration of capitalism, neoliberalism — prevalent mostly in western democracies — is sick and dying.

But the go-go 1990s feels like a distant memory today. And in his book, Mason suggests a way forward, drawing on classical Marxist theory that’s been updated for the information age.

Mason argues for what he calls a postcapitalist society. Such a system would include universal basic income; a socialized finance system; increased collaborative work; and increased regulation to prevent the growth of low-wage, low-growth jobs. Imagine if we could all enjoy the benefits that sharing economy companies like Uber offer its participants but companies also paid enough taxes to pay for programs that support those workers.

...So, how does all of this tie in to the 2016 presidential election? It starts, of course, with Bernie Sanders and Donald Trump, both of whom have channeled voters’ frustration and anger with an economic world that, they feel, has left them behind.

In an interview from London, Mason was quick to dismiss Trump, calling him “a showman and a charlatan and a racist.” He claims that the rise of Trump is proof that neoliberalism is broken. With people left as adrift as they are, he says, “it’s no surprise that an empty can rises like flotsam.”

...In many ways, it is remarkable that candidates who speak against free trade the way Sanders and Trump have have had significant traction this primary election season. But the signs have been there over the past few years. Wendy Brown, a political scientist at the University of California, notes that the Occupy movement was among the first to point out the dangers of the neoliberal economic system.

Republicans, of course, would never go for Mason’s suggestions; just this month, John Kasich called for the “Uberization” of the federal government. Uber, with its limited rights and benefits for drivers, is in many ways the poster child for the neoliberal dream.

Mason’s book offers a stark portrait of a potential future in which inequality grows to unimaginable heights, leading to social unrest. “I can see within a century the end of the market system as we know it,” Mason says.

That may sound a bit extreme. But in a world where more and more people feel like the economy has flat out left them behind, it would be foolish to disregard what should come next.

I expect there will be a struggle between the free market fundamentalists and a broader, vastly more numerous base spanning both blue and white collar working and middle classes. Inequality will be one driver but there will be others. We have to shake 18th century economics, 19th century industrialism and 20th century geopolitics - the forces that spawned globalism. These modes of organization are antiquated and no longer retain much utility. They were conceived during and designed for a much different world with a far smaller overall population, a surfeit of cheap resources and a far lower rate of consumption.

We're running into walls, one after another, and these walls are boxing us in, eliminating or narrowing options and choice. Our obsolete modes of organization, the foundations of neoliberalism and globalism, have no settings to deal with overpopulation, over-consumption or climate change. That much is apparent from the manner in which they're based on perpetual, exponential growth. On a finite biosphere, our Spaceship Earth, the limits of growth are sharply defined and yet, instead of organizing ourselves accordingly, we keep resorting to sleight of hand, parlour tricks, that lead to deforestation, desertification, the collapse of major fisheries, the draining of our groundwater resources - on and on and on.

What I fear most is that the failure of our leadership to acknowledge and respond to these issues will lead to mass unrest and a population that's easy prey for the first charismatic despot to come along and feed off their discontent. The fact is that happens more often than not and it only makes a difficult situation enormously worse.

Thanks for that good post. I look forward to reading Mason's book. In the UK they have Corbyn, in the US they have Sanders, when are we going to produces a leader who actually talks about redistribution and fair taxation instead of towing the neo-liberal line like Mulcair?

I think you might find this an interesting link

Within it is another link "Abundance" - another good read.

Technology may end up speeding-up the destruction of our current form of capitalism. Most don't understand what's happening until it hits them in the face (like Uber and taxi cabs).

A guaranteed minimum income with corporations forced to pay their fair share of taxes is a start. Looking forward to a "Star Trek world".


I just looked on Amazon, Kirby, and it's available but seems a bit pricey. You can get the ebook for about $14. I'll wait until it shows up on Abebooks next year.

@ UU4077 - I did a post the other day on Galbraith's "The End of Normal" that focused on the chapter dealing with "creative destruction." This expands upon some of the points made in your links. Galbraith writes of, " new ways for the information-processing device to perform tasks that used to be carried out by someone else for money; new ways to kill off activity elsewhere; new ways to devalue somebody else's skill" as the inevitable result of our rampaging technology.

It's almost never mentioned that Adam Smith, in his 1776 "The Wealth of Nations," foresaw that the Ponzi scheme that today's capitalism has become would have a shelf life of about 200-years. Give or take half a century it seems he was right. From Wiki: "A central theme of the book is the desirable consequences of each person pursuing self-interest in the marketplace. He theorized and observed that people trading in open markets leads to production of the right quantities of commodities, division of labor, increasing wages, and an upward spiral of economic growth. But Smith recognized a limit to economic growth. He predicted that in the long run, population growth would push wages down, natural resources would become increasingly scarce, and division of labor would approach the limits of its effectiveness."

After this period, Smith concluded civilization would enter a 'steady state economy' not because it was particularly desirable or superior but because there would be no other option. It seems ridiculous to even argue the point but we live on a finite world and the limits of this world prescribe that the economy must be a subset of that environment. I think we may be on the verge of discovering that immutable law of nature but possibly much too late.