Neil Macdonald on Trudeau's Betrayal of the Canadian People 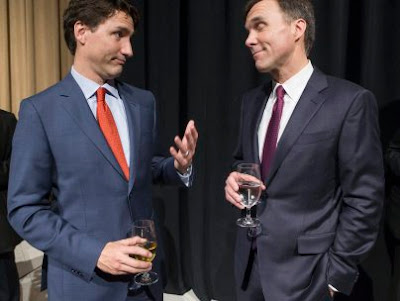 Political cowardice is something we're getting used to from our federal Liberal government.  Justin Trudeau may have a lovely smile but very, very weak knees. When it comes to taking bold steps demanded of true vision, he's usually a no-show. Can you say "electoral reform"? I know Justin cannot.

Then there's the problem of Canada's decaying, sometimes derelict infrastructure. That's everything from the electrical grid to sewer and water lines, roads and highways, air and sea ports, railway lines. Those are essential services. Without them our society would probably collapse within a week after the grocery store shelves fell empty.

We're now at that point where successive governments, federal and provincial, have kicked the problem down the road so long and so far that we've run out of road.  Governments have to dig deep to come up with the money to fix what can no longer be ignored but this is the age of "Everyday Low Taxes." Absent real leadership, tax increases can destroy political futures.

I recall Richard Nixon telling David Frost that the true test of political leadership was the ability of a leader to persuade the public to support a measure that was either painful or unpleasant. If you can't get them to swallow the bitter medicine, you're shite as a leader.  Which brings us back to Trudeau, the Liberal government and our major infrastructure problem. That problem, in four words, is "somebody has to pay."

The Trudeau government, in an act that marries cowardice with betrayal, has decided to let the public sector take over the government's own responsibilities. They call it PPP or Public-Private Participation. The private contractor builds, and essentially owns, the highway recovering its costs and a hefty profit directly from the public.

One of the grand lies that's endlessly told by the politicians perpetrating this cowardly dodge is that the private sector carries all the risk. That's why they get to lard their pockets with that extra profit. It's a nice story but history, especially recent history, reminds us that it's bullshit.

By recent history I mean last month's failure of British construction giant, Carillion. The Tories had done all sorts of PPP deals with Carillion - roads, hospitals, schools, prisons, you name it. It was all great until it wasn't. When Carillion went down, all that risk bounced straight back into the laps of the public - and the public purse. After all, someone has to pick up where the outsourcing contractor left off.

But Carillion, huge as it was, still was just a fluke, right? These things happen. They sure do, a lot. Since Carillion went down two more outsourcing contractors, Interserve and Capita,  hit the skids.

The recent collapse of Carillion, which had contracts with the government to provide services such as NHS cleaning, school dinners and prison maintenance, has intensified the spotlight on the sector.

Days after Carillion plunged into liquidation, the government was forced to deny that rival outsourcer Interserve was on the same path to oblivion, after it had been reported that it was on a watchlist of troubled companies.

Serco, one of the largest outsourcing players, has been struggling to regain its financial stability since a 2013 scandal when it overcharged the Home Office for electronic tagging of criminals.

Now Capita has become the latest in the sector to suffer a major setback as its new chief executive, Jon Lewis, “kitchen-sinked” an array of bad news by releasing it all at the same time. Shares in the firm tumbled 47.5% to a 15-year low after Lewis slashed profit forecasts, announced plans to tap the market for £700m of investment and suspended a dividend that was worth more than £200m to shareholders last year.

Some industry observers saw the writing on the wall for the outsourcing sector long ago. Tim Wainwright, an expert on outsourcing at global accountancy firm EY, said outsourcers have been squeezed by the need to provide services ever more cheaply, even as their costs have risen.

So now prime minister What, Me Worry? and his finance minister Bill Churn Baby, Churn Morneau want to drag Canada - and the Canadian public - down the same road traveled by Carillion, Interserve, Serco and Capita. There you go, problem solved.

The CBC's Neil Macdonald has apparently had enough of this PPP bullshit.

Bill Morneau, our federal finance minister, tells us the government's dodgy-sounding scheme to let private investors build and manage public infrastructure is a "win-win-win," as though such a thing exists.
...

Anyway, he must feel a bit of a fool. He's from Bay Street, and must know that in business, somebody usually gets the better end of a deal, and generally, the great white sharks of the business world — the huge institutional investors he's hoping will relieve the government of a traditional responsibility — eat very well indeed.

Trudeau is even promising the private sector zero or little risk.

According to information in documents obtained by the Canadian Press, the government is promising a healthy, guaranteed "revenue stream" for years. The exact return is not specified, but such investors tend to demand between 10 and 20 per cent – "equity-like return and bond-like risk," as the Wall Street aphorism so neatly puts it.

Best of all for the investors, according to the documents, the government is suggesting it might even chip in some extra cash to pad investors' returns. It's a path to heaven with no alternate route to hell.

And guess who will pay for all this? The cheery fog exhaled by Morneau and his fellow cabinet ministers isn't very specific about that, but there is ultimately only one bill-payer, and we all know who he, or she, is.

Government documents suggest that the goal is to raise about $240 billion from investors over the next 12 years, for a total of $300 billion in spending.

But how the government arrived at that figure is a mystery. There has been no methodical assessment of what we need. Other countries have done that sort of homework. We haven't.


The government's own Economic Advisory Council complained about this lack of data, and finally just resorted to citing estimates between $150 billion and $1 trillion. That's quite a margin. Another authoritative study, the McKinsey Report, has said there's no need at all for additional infrastructure spending in Canada.

"Meaning we don't have a clue," says an assessment by Azfar Ali Khan and Randall Bartlett, economists at the University of Ottawa's Institute for Fiscal Studies and Democracy. "We don't even know what and where the investment needs are."

In any case, there are precisely no projects under way. At least none that we know of. So far, apparently, it's been a confidential, informal courtship of big-money investors — a dance with tightfisted, powerful people, all looking for the sweetest deal possible.

So, kids, prepare yourselves and your own kids and their kids for a potential multi-generational ass raping. Sort of like British Columbia's Fast Cat ferry fiasco only times a gazillion.
Posted by The Mound of Sound at 10:38 AM

Thanks for writing this,Mound. It lays bare the absolute lie that Trudeau and his fellow neoliberal travellers are selling to the public.


I wonder if they know it's a lie, Lorne, or whether they're so immersed in their ideology they can't see it. Perhaps, as in other critical areas such as climate change, they've lapsed into a state of deep cognitive dissonance where conflicting facts and knowledge simply fall away as water from a duck's back.

If they do know it is a lie then they're monsters. I still have trouble getting to that point although I doubt it matters to the result.