People Don't Turn their Backs on Democracy Unless It Has First Turned From Them. 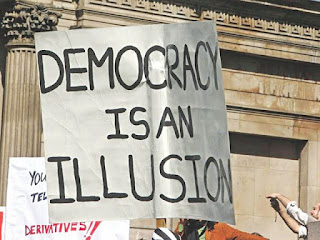 There have been a few reports recently that American millennials are souring on democracy.  Apparently it's happening across the Western world.

If you’re old enough to remember the Cold War, maybe you think of democracy as sacrosanct, an often-endangered ideal worth fighting for. But if the Berlin Wall was before your time, you might not take the value of democracy as given. That’s one conclusion that can be drawn from recent studies that suggest young people are not as sold as their parents and grandparents were on this most basic of American ideals.

According to a study published in October 2017 by Pew Research, there’s a division of opinion in many countries today on whether states are more effectively governed by “experts” or elected officials. In advanced economies, young adults are more likely than older people to prefer technocracy to democracy. The study found that in the U.S., 46 percent of those aged 18 to 29 would prefer to be governed by experts compared with 36 percent of respondents aged 50 and older.

A study from Harvard’s Yascha Mounk and the University of Melbourne’s Roberto Stefan Foa published in the Journal of Democracy in January 2017 produced an even more striking result. Just 19 percent of U.S. millennials agreed with the statement that “military takeover is not legitimate in a democracy.” Among older citizens, the total was a still-surprising 43 percent. (In Europe, by contrast, the corresponding numbers were 36 percent for younger people and 53 percent for older people.) Perhaps most alarming was the revelation than one quarter of millennials agreed that “choosing leaders through free elections is unimportant.” Just 14 percent of Baby Boomers and 10 percent of older Americans agreed.

Their attitude is entirely understandable given the degraded iteration of democracy, this Potemkin democracy on offer today. The neoliberal order is simply not, in the long run, compatible with liberal democracy. It thrives even better in command economies such as China's. Something has to give and it has, even in Canada and far more so in the United States.

Democracy hasn't existed in the U.S. for years. The Gilens and Page study, published by Princeton in 2014, vividly demonstrated that the corruption of the American government with its "bought and paid for" Congress has displaced democracy with oligarchy, plutocracy directed by America's elites.

This is what happens when progressivism is expunged from practical politics. The progressive branch of the Liberal Party was sidelined, marginalized pretty thoroughly since at least Ignatieff's reign and remains an atrophied artifact of the former Liberal party that hasn't drawn breath since Pierre Trudeau stepped down. List the major progressive achievements of every Liberal leader since Trudeau. It's a damned short list. Oddly enough the only one who showed progressive leanings was Martin with such things as R2P, the Kelowna Accords, and such.

The kids know this business about democracy is a scam. Let's not blame them for realizing the truth, their predicament. We created it. It happened on our watch and we were just fine with it.

Honestly, I'm trying to escape poverty myself. Working my way through university in Kamloops seeking a BofA degree. Taking a few sociology classes. What I'm learning, in correlation with my 'street/country road' education has left me with a gaping cynicism of society.

I have much I want to say, but it's still percolating in my mind.

Some ideas include:
-Demographics are changing, which is causing reaction amongst the 'old guard'. These aren't well-thought out actions the old guard are taking either, but instead stimulus/response mechanisms. They're continuing to act upon what they know: neo-liberal mechanisms. And they won't work.
-things will get worse before they get better. If there's even any 'getting better' to be had. At any rate, the next generation will suffer through some pretty lean periods. If they're smart about it, the leadership of that generation will do these things themselves: raise interest rates, erect tariff barriers, knock corporations to the ground and step on their necks until they subordinate themselves to the state.


All I can say, Troy, is that your generation and the generations following will be in dire need of minds such as yours. Keep plugging away.

As we expected, the billionaires are building doomsday bunkers for themselves. We aren't invited.

Who needs democracy when you have money?