The Tar Sands Are a Big Loser. When Will Trudeau Wake Up to Reality? 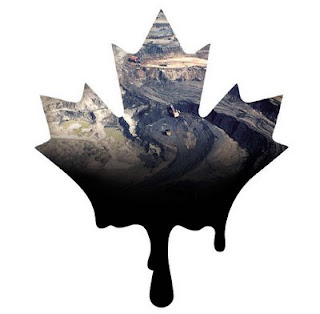 Last week it was renowned Alberta ecologist, University of Alberta prof Dave Shindler, who along with Trudeau's own Environment Canada and the Royal Society of Canada, demolished Alberta's and Ottawa's laughable claims that their bitumen pipelines and supertanker scheme is safe. They haven't done the core research, the really important science. They haven't even started.

Now their economic case for the Tar Sands is gutted by David Hussey, a political economist at the University of Alberta's Parkland Institute.  Hussey sets out his case in an op-ed in the latest Tyee. Here's an excerpt.


While the benefits of the oil and gas industry have declined, the cost of carbon pollution from the combustion of fossil fuels has increased. The price of carbon across Canada will reach $50 per tonne in 2022, which economists consider a very conservative estimate of the social and economic costs imposed on the world by carbon pollution.

A report published last week by the Parkland Institute looked at the effect of a $50-per-tonne carbon price based on the proven oil and gas reserves of those big five oilsands producers.

Even using this low carbon price, the cost associated with these reserves being combusted ($320 billion) outweighs not only the total assets and stock value of the big five (about $250 and $190 billion, respectively), but also Alberta’s entire economy (about $310 billion).

The actual costs of burning these fossil fuels will be much greater through their contribution to global climate change. Indeed, the consequences of extracting and burning the proven reserves of the biggest oilsands producers would be catastrophic, and would be felt by people and environment through the increased frequency of extreme weather events, such as floods and wildfires, as well as negative health effects and coastal damage.
...

The benefits of the oilsands are declining, and the effects and costs of climate change are increasing. The economic opportunities from phasing out the industry — cleaning up oil wells and toxic tailings and ratcheting up our renewable energy and clean technology industries — are enormous.

What are we waiting for?

It's plain as day. With Justin Trudeau, just as with Stephen Harper before him, partisan politics comes before this country.
Posted by The Mound of Sound at 12:45 PM

In order to fight climate change, we must export more diluted bitumen.


"In order to fight climate change, we must export more diluted bitumen."

Shell Oil got out of the tars sands sometime ago. They no there's no economic argument to keep them there.

This would mean paying an extra $8 when I fill up my SUV.

In 2022 this plan will be reviewed going forward. They have to make sure the economy is still growing (ie: clean growth).

Albertans and Notley need to take some personal responsibility and refine the tar in downtown Calgary and then clean up their own mess. They won't because they can't afford it. They want to keep all the benefits and stick British Columbians will the costs.

Albertans and Notley could post performance bonds consistent will the pollution costs that always follow pipelines. They won't because they can't afford it .