Breaking the Hold of Neo-Feudalism 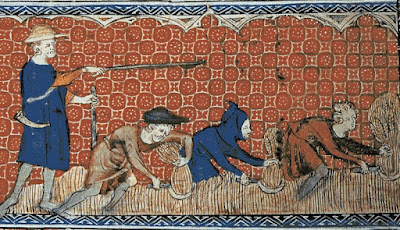 It's what Canada's finance minister calls "job churn" when he tells Canadians that the gig economy is their future and they can lump it. Welcome to precarity, going from short-term job to short-term job, living from paycheque to paycheque, often without benefits, considering yourself a success if you're lucky enough not to fall within the cracks. That's the Morneau/Trudeau way.

California, the state whose economy is not quite double Canada's, sees the gig economy differently. There it's the hallmark of neo-feudalism and they're working to drive it out.


Labor leaders cheered in the balcony and lawmakers embraced on the floor of the California Senate on Tuesday as it passed a landmark measure that defines employees, a move that could increase wages and benefits for hundreds of thousands of struggling workers.

But the bill is as much a starting point as an endgame: It will drive a national debate over how to reshape labor laws fashioned in the industrial era of the 1930s to fit a 21st-century service and knowledge economy.

With the measure, which Gov. Gavin Newsom says he will sign, California will lead in a shift that will likely redefine the roles of governments, unions and worker organizations. Just as federal labor laws were promulgated to help the country recover from the Depression, the imperative to extend basic guarantees like a minimum wage stems from the staggering income inequality in California, the state with the highest poverty rate in the country.

...The “new economy, the gig economy, the innovation economy” is “feudalism all over again,” said the Assembly speaker, Anthony Rendon, a Los Angeles Democrat.

There's a term for this California initiative. It's called "progressive democracy." That is what caused me to start this blog a dozen years ago. Our governments have given away far too much sovereign power to the corporate sector with every free trade deal they've inked. Ordinary Canadians have been 'sold' into neoliberalism and Morneau's 'job churn' future speaks volumes.

Some think this is about Uber and Lyft drivers. It's not. It is about all sorts of those under the boot of the gig economy. Read this.
Posted by The Mound of Sound at 9:37 AM

I abhor Lyft & Uber and their claim to be "sharing".
(Uber already announced they see loopholes in the new California law and won't be bound by it.)

I really like that we've kept them out of BC till now.
(BC Greens very wrong on that (also-climate-related) issue, btw.)

At least the new taxis drivers here will have to possess a class-4 license like the old taxi drivers but the pause/delay could have been used to design and test a completely new model that encourages workers rights and public transit.
Taxis and Ubers should mostly be used as the 'last mile' of an integrated system.


What are your thoughts on governments supporting organized labour instead of thwarting it, NPoV. That's the important point of this post, not Uber.

There's fetishization of AI and robots happening, but there'sbeen no reduction in work. It's just production has ramped up. And waste too.... Demand has grown linearly but production exponentionally.

Work is evolving but it isn't lessening. However, there's all these capitalist schemes to remove money out of the hands of those who do the work.

AI and robots push work down the line rather than making workers obsolete due to increased production.

It's madness. There's a need to take the reigns of this. Knock the financiers down a peg or two, and get the economy back under control, especially for climate change mitigation and preparedness. Especially before capitalism destroys itself.

"CALIFORNIA JUST DROPPED A BOMB ON THE GIG ECONOMY — WHAT’S NEXT?
Uber and Lyft drivers still face a long road ahead in their fight for employment status"

Are we not talking about the same thing???

No, NPoV, we're talking about the issue much more broadly and as it relates to Canada. This goes far beyond two cab hailing outfits. It goes to our finance minister casually consigning the public to a future of "job churn" as though that wasn't something the public should expect their government to fight.


Troy, we need a restoration of progressive democracy, something that was thwarted by the arrival of the neoliberal era.

Even the federal government has moved from a traditional civil service into more contract employment, also devoid of standard benefits including pensions.

California has proved for a number of years now that the neo-liberals were wrong all along.

Re, we need a restoration of progressive democracy, something that was thwarted by the arrival of the neoliberal era.

The trouble with democracy is that the electorate vote for the ones offering free beer!
Democracy has self serving unrealistic ambitions.

We have to reinvent the wheel!

In yet another blow to neoliberalism, California just voted to ban private prisons to remove the profit motive from incarceration. The ban also applies to ICE facilities, which ought to engage Hair Furor. https://www.theguardian.com/us-news/2019/sep/12/california-private-prison-ban-immigration-ice


I don't share your cynicism, TB. In today's politics about the only thing on offer are spoils for the victors. Progressive democracy, by contrast, operates with a dominant focus on the common good. It creates a sense of connectivity with government and society. Neoliberalism instead entrusts much of the public welfare to the corporate sector, releasing government of that responsibility but also alienating electors from the elected. Neoliberalism also fuels inequality and, as we've seen, allows an enormous transfer of wealth into the most affluent accompanied by a transfer of political influence/power.

Give people something to vote for that's meaningful in their lives and the lives of their children and they'll respond. The neoliberal hucksters, however, often resort to scapegoating and fear mongering instead. The voter may go home with an empty stomach but he's been told who to blame it on - the Chinese, immigrants, socialists, etc. That has been enormously successful.

Remember Lyndon Johnson's observation:
“If you can convince the lowest white man he’s better than the best colored man, he won’t notice you’re picking his pocket. Hell, give him somebody to look down on, and he’ll empty his pockets for you.”


California is no utopia, Owen, but it strives to improve and makes other jurisdictions look pretty shabby along the way. There's a reason California is regularly attacked by Washington.

"we need a restoration of progressive democracy, something that was thwarted by the arrival of the neoliberal era." Your explaination sounds like "Marx".

Groucho or Chico? Have you ever read Marx? Lenin? I did. Guess where? Officer school. That was many years ago. I was still a teenager. Yet, judging by your remark, I was a damn sight brighter than you are today, Anon.