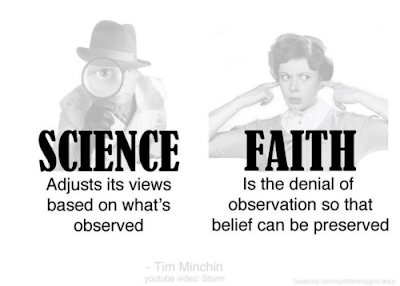 Nearly half of us consider scientists "elitists" and now one in three is skeptical about science, up from one in four just a year ago.


A survey suggests that the trust Canadians place in science may be eroding.

The survey, by the polling firm Ipsos for the multinational 3M company, also found that nearly half of those surveyed thought scientists are elitist and that a significant number of respondents discounted findings that don't accord with their personal beliefs.

...Of those who said they were skeptical of science, about one-third felt scientists were influenced by government agendas. Another third thought science has been swayed by corporate agendas.

And 30 per cent said they only believed science that aligned with their personal beliefs.

Other findings have echoed this survey.

..."It's depressing but not too surprising," said John Smol, an ecologist at Queen's University who has written about the issue. "There's a real disconnect between what scientists do and what is the perception in the public."

Smol fears Canadians don't understand how science works — that data, not belief, is what counts and that science advances when old beliefs are upended, not shored up by unspoken consensus.

"There are certainly misconceptions," he said. "You can't blame them. It's a jungle of misinformation out there."

This survey will come as music to the ears of the Conservative denialist community - Jason Kenney, Scott Moe, Andy Scheer and the fringe represented by Bernier.

In a nation with an electoral system so debased that winning less than two out of five votes on election day can translate into a powerful majority win, undermining fact and knowledge in the public's mind is a triumph. It reveals that their misinformation campaign (ever watched a Trans Mountain Pipeline ad?) works. Belief is far more malleable than knowledge-based science. It appeals to the lizard brain.

I just read that the Saskatchewan government has denied those with solar power to have access to Sask Power's grid! and they were given one day's notice.

Can this be true? and is this where our evangelical/conservative politicians want to take our country??? Please, Mound, tell me its just another vicious rumour???

Is it information overload, denialism or a latent religionism that drives us to deny what is firmly in our faces?
Perhaps it is all of the above.

Our want to be next PM's response to global warming and the need for drastic change is proof positive of that or perhaps it's proof that the corporate world decides elections?

To deny science is , historically, a religious backlash.
Perhaps we have lived in a Judeo Christian world for so long and where 'man will have dominion upon nature' that even the non religious believe in this concept?


Much rambling by the creek.


The wheels seem to be coming off our wagon, TB.

It's anti-vaxxers writ large. People too young to remember the ravages of measles, smallpox, chicken pox, mumps, TB, diphtheria, whooooping cough, and the real biggie - polio in the 1950s. Happened before their time and hence doesn't exist. They've breezed through life taking no notice of anything much, are inacapable of managing spending and credit card debt, and spent no time learning anything much in school. It was all a bit too much to be forced to sit down and learn, y'know. Boring.

Scientists are downers who make ripples in their wonderful lives by pointing out nasties like climate change. Who wants to hear that stuff? Doctors are downers too - hamburgers are good food for everyday sustenance and if you add fries and lashings of ketchup, you get all the food groups. What's the prob? Fried chicken and pizza are good alternatives too. Whaddya mean I need to diet and exercise? So if you feel a bit bilious, the naturopath down at the mini-mall or in some old farmhouse out in the country and thus wise, will cure it with capsules full of crushed dried oak leaves and any one or more of repackaged Jamiesons' herbal remedies. Here, take this! You'll be right as rain in a moment, old son.

I love Mencken's tirades from a century ago against chiropractors. Sums up the societal nitwits' need to believe in magic rather than science; and now my tax dollars go to support these quacks. This anti-science or anti-intellectual belief is not a new phenomenon. Kellog invented corn flakes as health food, and every tinkerer with an electricity outlet in 1905 invented electro-machines to cure all ills on the basis of nothing at all.

So far as I'm concerned such anti-scientific social darwinianism will serve to thin the ranks in an epidemic. Harsh judgement perhaps, but hey, it's not like they weren't warned.


Yes. Yes, BM, they were warned and warned again.

The academic prostitutes at the foundations and institutes have done their jobs and more. They've managed to discredit science.


They have waged a fierce struggle to undermine science, John, succeeding where even RJ Reynolds finally failed.