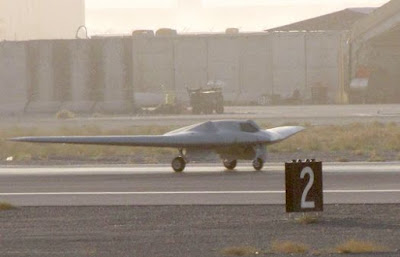 This is the "Beast of Kandahar." It is Lockheed Martin's super stealth RQ-170 drone. It was 'top secret' until it wasn't. In 2011, the CIA had one operating over Iran but, it seems, the Iranians were ready with a trap.  As the story goes the Iranians jammed the 170's communications links, overrode the system and force landed the drone at a military airfield.

The drone was hustled away to a location where, within days, it was unveiled to the public. 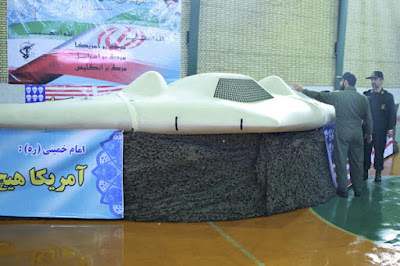 It doesn't look like the real deal to me, more of a mock-up. That's not to say the Iranians didn't have the goods safely sequestered somewhere else. What is known is that the US admitted it had lost a drone over Iran at the same time Tehran said they had snagged the RQ-170.

It wasn't long before Chinese and Russian experts visited Iran to delve into the secrets of the RQ-170 drone - it's design and shaping, radar absorbing coatings, and its electronics payload.  Bits and chunks were reportedly taken back for inspection, testing and reverse engineering.

Israel claims a clone RQ-170 flew into Israeli airspace out of Syria. Israeli gun video shows a swept-wing delta flying below a jet interceptor. Israel claims the fighter shot down the drone. Other accounts speak of a RQ-170 knock-off evading two Patriot missile launches and a subsequent air-to-air missile before returning, intact, to Syrian airspace.

Iran says it (more likely the Russians and Chinese) have unlocked most of America's super stealth technology from the RQ-170 and have developed workarounds for what they have not yet figured out. The Iranians also claim to have fitted the stealth drone to carry four precision-guided rockets.

Aerial photos of the bombed out plant leave little doubt this wasn't some random bombing. Strategic installations were targeted leaving most of the plant untouched. It has been reported that the Saudis failed to detect the drone and didn't know they were under attack until the rockets detonated. That suggests sophisticated stealth technology, RQ-170 grade.

Don't see why this particular Iranian reverse-engineered drone should necessarily be the culprit. The Houthis have many other types. The Israelis have shot down at least one RQ-170 clone, examined it and didn't officially seem to be overly impressed. Going around the usual sources of Moon of Alabama and The Saker, who have talked about the increasing sophistication and range of Houthi drones and cruise missiles these past six months, nobody has talked about the RQ-170 clone being the culprit one way or the other. The attack seems to have been a combination of drones and cruise missiles, even according to mainstream sources of womderfulness like Global News. The Houthis of course claim they did it - Operation Deterrence 2.

In fact, there seems to be general confusion all around among the pundits. Even with that world-renowned expert on every topic, Donald J Trump. Conspiracy theories abound. One thing is, with the Salman nutcase having beaten on Yemen and essentially gotten nowhere important, beyond starving millions and generally acting like a complete A-hole, with Canada supplying "Jeeps" to the Saudis to help out of course, who feels sorry for the Saudis? You reap what you sow and all that.

And if dem rotten low-down lying Iranian skunks, ha ha, are behind it all after Trump conked the Obama pact on the head just becuz and threatened or imposed sanctions on anyone dealing with Iran by way of trade, I think the West's security services had better have a deep think about how they act in the Persian Gulf region, or there will be a lot of sunk US and UK warships, and zero oil flow out of the Gulf. It seems that the West is at least under temporary checkmate and should wake up. The Brits with their usual huffing and puffing under Boris the Bozo have sent some tin cans to the area to be sitting ducks for Iranian target practice if they attempt to seize another tanker or two to show those Iranians who's boss.

Dangerous situation, and despite a world glut of oil, expect those gasoline prices to shoot up as oil companies rake in extra profit on stocks already in storage tanks, with the expected reduction in Saudi shipments as some shallow excuse. Jason will no doubt offer Alberta's help, stalwart fellow that he is, following the written lashing he got from Amnesty international, well documented by Climenhaga. Our own home-grown nutball likes to stand up and spout nonsense even as he shits on Alberta public servants from a great height while claiming Alberta is broke due to tax relief for the rich and thus lower provincial government revenues, the usual worldwide Con trick whenever naughty people at home need to experience some downhome austerity for old times' sake. And Kenney keeps his grudges in the forefront of his tiny mind. The Bloq Quebecois is on the rise against Albertan lack of environmental awareness and atacks on equalization payments not being consonant with those advanced Quebec intellectuals green-ness who also think banning the wearing of religious symbols for public workers is just the job.

Merely another week in the uselessness of governments all over the world, while we experience a usual milquetoast Canadian election campaign. Environmentalism and climate change? What's that?

Big smile here in the flatlands..

The use of drones is making the purchase of F35's and Patriot missiles at $gazillion each a little pointless!