What We're Really Up Against 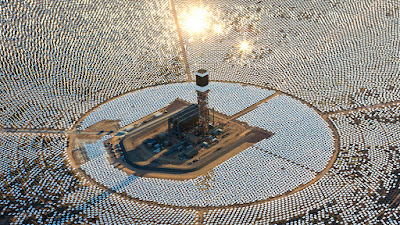 I've heard a lot of people who, at the mention of the climate crisis, believe that, when the time is right - just a little longer, any year now - we'll all just throw a few solar panels on the roof and - problem solved.

Sorry, that's not going to happen.  It's wishful thinking of the sort that can lead to truly dangerous delusions.

An article at BBC Future takes a sobering look at the hurdles that stand in our way to a clean energy world. They're daunting. Not insurmountable but damn near. I won't load you up with crushing realities. If you want them, follow the link.

The author suggests that our best intentions won't work unless we're ready to overhaul capitalism as we understand it, this melange of 18th century economics, 19th century industrialism and 20th century geopolitics.  If we're to have a reasonable chance of salvaging our societies we have to ditch globalism, the hell spawn of our fossil fuel contagion and re-localize our economies.


The current blind faith in technology will not save us. For the planet to stand any chance, the global economy must be redesigned. The problem is more fundamental than capitalism or the emphasis on growth: it is money itself, and how money is related to technology.

Climate change and the other horrors of the Anthropocene don’t just tell us to stop using fossil fuels – they tell us that globalisation itself is unsustainable.

Now we know what they really meant when they said, "The market will provide."


You might wish to substitute "inflict" for "provide," John.

Your thoughts Mound? This could be the breakthrough we're looking for.

"If we're to have a reasonable chance of salvaging our societies we have to ditch globalism, the hell spawn of our fossil fuel contagion"

Yep free-trade globalization is the hell-spawn of every evil on the Earth. It's turning the place into a gigantic, Orwellian insect-colony. A complex of industrial complexes invading the planet like The Borg!

Of course, the High Born who build The Machine are too greedy and stupid to control it. Next time it all falls apart, it's all on the Lord Jesus!

Perhaps He's giving us one last chance with The Donald! If you take a look around, he's the only one standing up to globalism, while globalists fling whatever comes out their arses at him.

Tulsi Gabbard is the only other sensible politician around. Of course, the DNC weaseled her out of the final debate spots.

Blue-blood neoliberal lawyer-politicians are like cockroaches. For every one you squash, there are 7 still lurking in the woodwork. And the Democrats haven't even tried to squash a single one! They're crawling all over the place!

When the cockroaches run the house, they call the exterminator on the people!

What about the "Market will decide". Suddenly the "Market" grows a brain to think on its own. Anyong