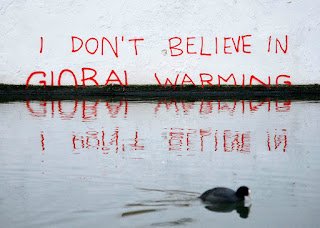 Everybody has to adapt to the times, I suppose. Those who study climate change denialism report that the movement to thwart efforts to not destroy Earth's biosphere has shifted.

John Cook at the Center for Climate Change Communication at George Mason University recently completed a study tracking climate misinformation in internet articles. He discovered an increase in rhetoric denying that warming is happening — but he also saw evidence of an uptick in misinformation about climate change solutions over the last few years.

"In some ways, the face of climate denial in political rhetoric has shifted," said Matto Mildenberger, a Canadian climate policy researcher currently working at the University of California, Santa Barbara.

"It tends to be much more either, 'We can't do anything about it' or 'It's not important enough to do right away.'"

The researchers have also found evidence that climate misinformation is affecting public opinion about the nature of climate change and the efficacy of solutions.

Deny, distract, deflect - does that sound like anyone we know? What about that guy down at 1200 Pennsylvania Avenue?


Anthony Leiserowitz, director of the Yale Program on Climate Change Communication, said some of these skeptics use "Chicken Little catastrophic arguments," such as "maybe we ought to do something but we don't want to destroy the economy and cause millions of jobs and send the entire world into a great depression."

"They've always been sophisticated, arguing there's large-scale uncertainty, that we don't need to act drastically, and that we need to look at this very carefully — and if there's a need to act, we can do it through innovation and non-regulatory things," said Brulle.

"This is 21st-century mass marketing and public relations technology being applied to this issue."

In a recent paper, Cook organized climate misinformation into five categories: "it's not real, it's not us, it's not bad, the experts are unreliable and climate solutions won't work."

Even Liberals have to admit that the current administration loves that "we mustn't harm the (petro) economy" excuse. It's only a matter of time, even for the major petro-economies. This 2018 report from The Guardian contends that even the oil giants will succumb to their handiwork before long.

The debate has moved from "Climate change isn't happening" to "It is not going to be that bad" or "Nuclear power is the solution."

In a city of 1.7 million, 500,000 hit the streets today in Montreal. Queens Park was full of protestors and the downtown core was clogged in Toronto. If this can be sustained, we may see some progress from politicians. Right now, they're just clogging the atmosphere with methane.


Cap, if the pols are smart they'll hear these young people and realize just how much change is needed, now. If not this could turn into something quite different.