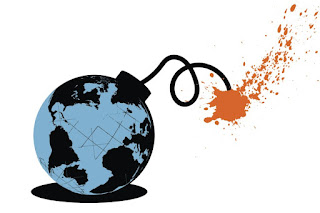 Today's LA Times editorial is grim - "Climate change is already here. 2020 could be your last chance to stop an apocalypse."

The changing climate is no longer an abstract threat lurking in our distant future — it is upon us. We feel it. We see it. In our longer and deeper droughts and our more brutal hurricanes and raging, hyper-destructive wildfires. And with that comes a new urgency, and a new opportunity, to act.

Climate change is now simply impossible to ignore. The temperature reached a record-breaking 90 degrees in Anchorage this summer and an unprecedented 108 degrees in Paris. We can watch glaciers melting and collapsing on the web; ice losses in Antarctica have tripled since 2012 so that sea levels are rising faster today than at any time in the last quarter-century. Human migration patterns are already changing in Africa and Latin America as extreme weather events disrupt crop patterns, harm harvests and force farmers off their land, sending climate refugees to Europe and the United States.

It’s often difficult to attribute specific events to climate change but, clearly, strange things are happening. In India, entire cities are running out of water, thanks, scientists say, to a dangerous combination of mismanagement and climate change. In Syria, the civil war that has killed hundreds of thousands of people and displaced more than 11 million is believed by many scientists to have been sparked at least in part by climate-related drought and warming. Closer to home, two invasive, non-native mosquito speciesthat have the potential to transmit viruses, including dengue, Zika and yellow fever have recently been found in several California cities.

According to NASA, 18 of the 19 warmest years ever recorded have occurred since 2000. The last five years have been the hottest since record-keeping began in 1880. July set an all-time record.

...It is late — terribly late — for action, but with some luck, perhaps it is not too late to avoid some of the worst impacts of climate change. In nations across the world, people finally recognize climate change as a top or very serious threat, according to the Pew Research Center. In the U.S., even Republican voters — and especially younger ones — are waking up to the realities and dangers of a warming planet.

...At this point, the mission is no longer to avert or reverse climate change, but to mitigate its worst effects (by continuing to reduce emissions and slow warming) and to adapt to others. Adaptation might mean retreating from coastal developments as the seas rise or elevating roads and installing flooding pumps (as the city of Miami is already doing), or creating carbon sinks to remove carbon dioxide from the atmosphere, all while continuing to try to curtail further emissions.

The striking part of this editorial is that there's nothing remotely controversial about it. It's all demonstrably true. Our predicament is indeed as dire as the editorial board contends. We very much stand at the edge of something right here, right now. Ask yourself how this can be given what we're hearing from our political leadership in the election campaign now underway?

How big a priority is this for Andrew Scheer or Justin Trudeau? Do they have a sense of the urgency of our plight? What are they prepared to do about it - build pipelines? The contradictions, the inconsistencies, their words and deeds are irreconcilable. What does it mean to declare an emergency that you won't acknowledge?

We face the ultimate challenge. And, as always, character is destiny.


I suppose you're right, Owen. Much of what confronts us and our inability to meet the challenges is a deficiency of character. I'll dwell on that for a while. Thanks.