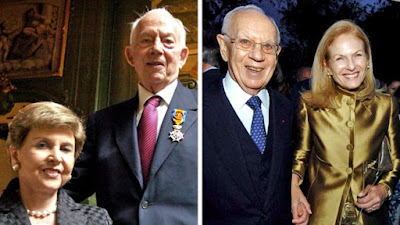 The Sackler clan apparently knows how to stash cash on a scale that would make KPMG weep with envy.

Team Sackler owns Perdue Pharma, a company that's in deep kimchi with claims relating to America's opioid crisis. I guess they figured it was time to get the Hell out of Dodge.


The New York attorney general’s office said Friday that it had tracked about $1 billion in wire transfers by the Sackler family, including through Swiss bank accounts, suggesting that the family tried to shield wealth as it faced a raft of litigation over its role in the opioid crisis.

Earlier this week, thousands of municipal governments and nearly two dozen states tentatively reached a settlement with the Sackler family and the company it owns, Purdue Pharma, maker of OxyContin. But the attorneys general of a majority of states, including New York and Massachusetts, are balking at the proposed deal, contending that the Sackler family has siphoned off company profits that should be used to pay for the billions of dollars in damage caused by opioids.


To Forbes, they're the "Oxycontin Clan." To BBC they're "America's most hated family." To the families of the 200 Americans who die daily from opioid abuse they're monsters.
Posted by The Mound of Sound at 1:58 PM

To art galleries and museums around the world, they're valued donors. When governments leave the field of arts funding to "philanthropists," you know a lot of that money will come from questionable sources. As they say, "behind every great fortune is a crime."


They should be reduced to penury and driven from the company of decent people.