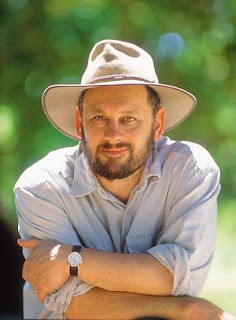 Cassandra. That's the mantle to be worn by anyone who regularly circulates the latest information from climate science. Chronicling a planetary-scale, slow-motion train wreck is not a cheerful pursuit. It makes for grim reading and it is getting demonstrably worse year upon year.

That said, I got a real body blow today from reading Tim Flannery's conclusion that his 20 years of climate activism have been a failure.

While I have followed climate science for a long time, Flannery's 2005 epic, The Weather Makers, was uniquely compelling.  Not only is it a great read but it just stitched everything together. It conveyed the enormity of the problem in a way that preserved hope that humanity might act in harmony in time to avert the worst.

Flannery is Australia's most prominent climate scientist.  He has several earth sciences degrees including a doctorate in paleontology. He's done it all - a professor, a research scientist, a prolific author with a gift for clearly explaining the living world to lay people, and various government posts including a stint as Chief Commissioner of Australia's Climate Commission.

So how can a guy who has done so much deem his career a failure?

In this age of rapidly melting glaciers, terrifying megafires and ever more puissant hurricanes, of acidifying and rising oceans, it is hard to believe that any further prod to climate action is needed.

But the reality is that we continue to live in a business-as-usual world. Our media is filled with enthusiastic announcements about new fossil fuel projects, or the unveiling of the latest fossil-fuelled supercar, as if there’s no relationship between such things and climate change.

In Australia, the disconnect among our political leaders on the deadly nature of fossil fuels is particularly breathtaking.

Prime minister Scott Morrison continues to sing the praises of coal, while members of the government call for subsidies for coal-fired power plants. A few days ago, the energy and emissions reduction minister, Angus Taylor, urged that the nation’s old and polluting coal-fired power plants be allowed to run “at full tilt”.

In the past, many of us have tolerated such pronouncements as the utterings of idiots – in the true, original Greek meaning of the word as one interested only in their own business. But the climate crisis has now grown so severe that the actions of the denialists have turned predatory: they are now an immediate threat to our children.

These political hacks are predatory, they are an immediate threat to our children, and Australia isn't alone. We have our own - Jason Kenney, Scott Moe, Andrew Scheer and, yes, Justin Trudeau, every one of them a tar petro-pimp.


Each year the situation becomes more critical. In 2018, global emissions of greenhouse gases rose by 1.7%, while the concentration of carbon dioxide in the atmosphere jumped by 3.5 parts per million – the largest ever observed increase.

No climate report or warning, no political agreement nor technological innovation has altered the ever-upward trajectory of the pollution. This simple fact forces me to look back on my 20 years of climate activism as a colossal failure.

Many climate scientists think we are already so far down the path of destruction that it is impossible to stabilise the global temperature at 1.5℃ above the pre-industrial average without yet to be developed drawdown technologies such as those that remove greenhouse gases from the atmosphere. On current trends, within a decade or so, stabilising at 2℃ will likewise be beyond our grasp.

And on the other side of that threshold, nature’s positive feedback loops promise to fling us into a hostile world. By 2100 – just 80 years away – if our trajectory does not change, it is estimated that Earth will be 4℃ warmer than it was before we began burning fossil fuels.

Flannery has long had worrisome thoughts about Canada and our feckless federal governments. It caused him to speak out during the 2015 election, the one that saw Justin Trudeau rise to power.


"It's the last opportunity for Canada to present as part of the global negotiation a credible alternative—and to be part of the solution rather than part of the problem," Flannery said. "One of the great fears for the [upcoming] Paris meeting is that the coalition of the unwilling will really scupper an ambitious agreement."

The scientist described the UN climate conference in Paris as "the last chance for Canada to engage constructively."

"So I just think it's incredibly important," he said.

And weren't we bursting with pride when our newly minted prime minister, his environment minister at his side, strolled onto the floor of the Paris Climate Summit and declared "Canada's back."  We engaged constructively and then our government instead turned to the business of building a new, super-capacity pipeline to flood world markets with the dirtiest high-carbon, low-value, contaminant-laced oil/sludge on the planet.  Canada was back. Trudeau would do what Harper couldn't. He would push through a mega-pipe to 'tidewater' even if that meant rigging the approval process and buying the pipeline project itself.

In today's Guardian interview, Flannery addresses a matter I try to avoid raising - the big Die Off that's coming and the fate that today's leaders are bequeathing to our children and grandchildren.


That future Earth may have enough resources to support far fewer people than the 7.6 billion it supports today. British scientist James Lovelock has predicted a future human population of just a billion people. Mass deaths are predicted to result from, among other causes, disease outbreaks, air pollution, malnutrition and starvation, heatwaves and suicide.

My children, and those of many prominent polluters and climate denialists, will probably live to be part of that grim winnowing – a world that the Alan Joneses and Andrew Bolts of the world have laboured so hard to create.

How should Australia’s  [Canada's] parents deal with those who labour so joyously to create a world in which a large portion of humanity will perish? As I have become ever more furious at the polluters and denialists, I have come to understand they are threatening my children’s wellbeing as much as anyone who might seek to harm a child.


Update:  UU has mentioned Mark Jaccard's recent tribute to Justin. It's decidedly saccharine. Then again his field is energy economics. His is a pretty low bar to clear. Today a UBC professor emeritus of human ecology takes a more critical view on how we are being sold out by the Trudeaus and the Scheers of this world, a threat to our grandkids' wellbeing.
Posted by The Mound of Sound at 10:04 AM

Tragedy, Catastrophe, Folly. It is all of these.


Sorry, UU, Jaccard is in the bag for Trudeau, has been for a long time. That Tyee article is a fluff piece, through and through.

The article is not just about Jaccard’s thoughts. Are you saying The Tyee would print a fluff piece favouring those pipeline-buying Liberals? Isn’t it possible that maybe it’s a bit of a balanced view of Canada from a global perspective.

We had friends visit a few weeks ago from Germany. Their comment was that Canada is a shining light in the world. (The comment was regarding Canada in totality.)


I read a piece by Jaccard a few weeks back that sounded as though he was after a Liberal riding nomination.

His PhD is in energy economics. Unfortunately his views significantly differ from those of climate scientists such as James Hansen, Michael Mann, Suzuki and, of course, Tim Flannery. He's a fine academic but he often winds up with one foot on the dock, the other in the boat.

What I find most interesting is how no one yet factors in where Trudeau's Canada will be on climate when he triples the capacity of TMX. An extra million barrels a day. What's that going to mean to our contribution to the Canada's and the world's climate crisis'?

Canada has made strides in the fight against climate change but, like the States, the credit goes mainly to provinces/states and municipalities.

Well, we've got a climate summit starting next week at which nations will have to produce concrete plans to cut emissions by half by 2030. Harper only targeted 30 per cent and Trudeau isn't on course to meet even that. Environment Canada admits we're falling further behind every year.

I agree with Flannery that fossil-states must take responsibility for the impacts of what they export. Our position is that, once it has left the dock, we're no longer accountable. Oddly enough, that's the same argument we once hid behind when we were still exporting asbestos.

Again, the article is not only about Jaccard’s views. And, FFS, it’s The Tyee.

As well,
I guess we will continue to disagree ... on how to invest one’s savings, as well as how best to approach climate change without destroying an economy.

"without destroying an economy" - what you're really saying is without destroying the existing economy, the status quo, that brought us to declare a climate state of emergency. Does the inherent contradiction not get through at some level, UU?

Trudeau's fossil energy policy is just a part of his government's pursuit of perpetual exponential growth.

I don't like the "Kool Aid" analogy but, as you would say, FFS.


Those who think Canada is doing well are delusional. They use a different litmus test - how are they doing politically - instead of a scientific measure.

I've not seen one of them yet see this threat for what it is - win/lose. There is no "close."

It is, as Churchill said one of those moments when he wrote that "sometimes it is not enough that we do our best; some times we must do what is required."

For a short while, there was a fledgling group in Vancouver called "Degrowth".

(It, alas, has degrown itself out of current existence.)

Jaccard was the featured speaker (circa 2012) in the basement of the main library. I wish I had video of the meeting.

At the time he was unequivocal:
No more pipelines or large fossil fuel investments - cause the sunk costs will keep them running long after they've been recognized as the cause of our modern dilemma.

When I read Jaccard's latest op-ed I was struck by his tone. I wondered if someone got to him. An offer maybe? At the time I wondered if he was planning to run for the Libs in Vancouver.

What you heard in 2012 is no longer his view. Something has changed. It can't be the climate. That hasn't gotten any better.