We Can't Let the Public Catch Us Screwing Them Over 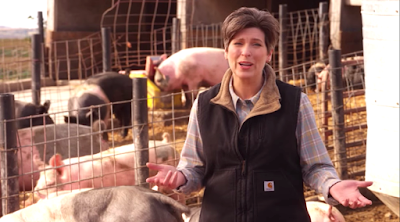 When she first ran for office Joni Ernst loved to point out her skill at castrating hogs. By her own account she was damned good it.

But the Republican senator from Iowa isn't nearly as candid when it comes to taking those pincers to the American public.

Ernst said out loud what Republican politicians usually only talk about in secret meetings with their billionaire donors: The GOP wants to cut our earned Social Security benefits—and they want to do it behind closed doors so that they don’t have to pay the political price.

At a recent town hall, Ernst stated that Congress needs to “sit down behind closed doors” to “address Social Security.” She vaguely asserted, “A lot of changes need to be made in this system going forward.” But, she complained, if these changes were proposed in public, she would be accused of pushing “granny over a cliff.” It is not hard to figure out what “changes” she has in mind.

There are many “changes” that should be made to strengthen Social Security and make it even better than it already is. But none of those have to be done secretly.

Ernst went to Washington to balance the budget. First she voted for Trump's trillion dollar tax cut for the rich and now wants to go after the American people. 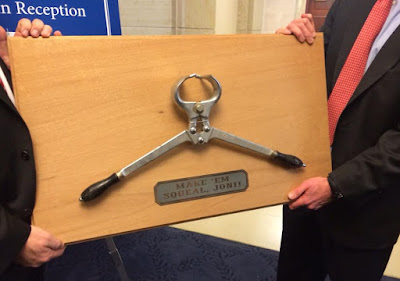 Isn't it about time that the working slugs of America were afforded the opportunity that Reagan gave the welfare people to ''escape the spider's web of dependency'' on Government programs?

"[T]he Founding Fathers made a great breakthrough in political understanding. They understood that it is the excesses of government, the will to power of one man over another, that has been a principle source of injustice and human suffering through the ages. … Out of the best of intentions, government has intervened in areas where it is neither competent nor needed nor wanted by the mass of Americans. …

"[I]t is by clearly restricting the duties of government that we make government efficient and responsive. … By preventing government from overextending itself, we stop it from disturbing that intricate but orderly pattern of private transactions among various institutions and individuals who have different social and economic goals. ... We remain aware of government’s urge to seek more power, to disturb the social ecology and disrupt the bonds of cooperation and interchange among private individuals and institutions through unnecessary intrusion or expansion."

"From sea to sea without one urban renewal program"

Are we there yet? What's taking them so long?


When a government, such as Joni's Repugs, drive through such a massive tax cut for the small segment of the population that least needs it, the working classes, blue and white collar, are not their priority. They defund an already debt-ridden government and then tell the idiots who vote for them it's their own fault that programmes have to be cut. Joni and her gang only do it because they've tested those waters in the past and know they can get away with it.