The Three Stooges of Westminster 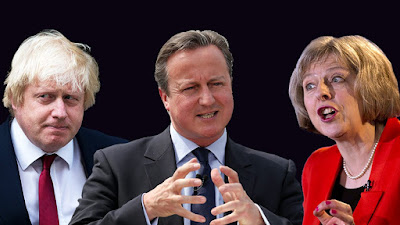 If the Tories keep going like this Queen Elizabeth is going to need a fresh bottle of hand sanitizer. David Cameron, Theresa May and now, Boris Johnson, the Three Stooges of Westminster.

Cameron laid the groundwork for the current Brexit fiasco that has rocked Parliament and left the British people deeply divided. Before that was the 2014 referendum on Scottish independence that could have unglued the United Kingdom had it not been narrowly defeated. The following year, after leading his party to a strong majority win, he launched the referendum popularly known as Brexit, again assuming the result would be to remain. It wasn't. Cameron stepped down and left the steaming puddle to his successor, Theresa May.

May, perhaps subliminally seeking to prove that she could screw things up just as thoroughly as David Cameron wasted little time before unveiling her own blunders.  The first was to trigger Article 50 of the Treaty on European Union, setting the wheels in motion to get the UK out of the EU and only then trying to negotiate (dictate) terms of exit with the EU.

Fearing the Euros saw her as weak and hapless, May threw the Tories' majority to the winds, calling a snap election, confident that her government would be returned with another solid majority. She hoped that a strong victory would send a message to Brussels that she had the country behind her.  Like David Cameron she took a gamble and it blew up in her face.  The Tories were handed a minority and had to strike a deal with the Ulster gang to cling to power.

It didn't help May that, within her own cabinet, insurrection was brewing. Boris "Both Ways" Johnson, Michael Gove and others were gunning to bring her down and become the next prime minister. May struggled tenaciously to hold onto power but to no avail.  Failing three times to get Parliament to approve her Brexit deal with the EU there was nowhere else to go but out.

Boris was rewarded by the Tory party faithful and became the third Conservative prime minister in just four turbulent years.  By now Parliament had become a shambles. Party lines gave way to 'leave' or 'remain' camps. Johnson pledged a Halloween Brexit, a hard Brexit if need be, come hell or high water.

This has not been a good week for Boris Johnson or the Brexiteers. MPs, many angered by Johnson's ploy to prorogue Parliament, have used their majority to take control from their prime minister. They have passed a measure prohibiting a hard (no deal) Brexit that is being expedited through the House of Lords. They also soundly defeated Johnson's motion for a snap election. To add insult to injury, today's Boris' brother, Jo, announced he's resigning his seat in the commons due to unbearable conflict between family loyalty and the interests of the country.

Where does Britain go from here? Who knows? There are many opinions, guesses mainly, on what lies ahead in the countdown to Halloween.  The Euros seem bemused. Newspapers on the continent are mercilessly taking the piss out of the unkempt first minister.


A “zombie prime minister” cornered by his “own intransigence” whose failed “kamikaze strategy” had left his country facing a future that had “never looked less certain” – Europe’s media were not kind to Boris Johnson after his fourth successive Commons defeat.

Le Monde said the prime minister had now “lost control of his Brexit strategy, the calendar and even of his own camp, which is deep in internal crisis”. The prime minister had warned in August the road would be bumpy, the French paper said, “but did he really expect to be buffeted to this extent, and so soon?”

The first of Wednesday night’s parliamentary votes “as good as finished off Johnson’s long-promised ‘do-or-die’ Halloween Brexit,” Le Monde said. His second defeat of the evening, in which MPs refused the prime minister an early election before a no-deal Brexit was no longer possible, was “even more bitter”.

Add to that the mounting fury in the Conservative party over his purge of Tory rebels, and Downing St “must surely be having doubts”, the paper concluded. Johnson may still have some options – including calling a vote of no confidence in himself – “but who outside the Westminster bubble still understands the Battle of Brexit?”

Some are calling the uprising in the House of Commons a revolution, a taking back of power from the executive into the hands of the elected.  I'll believe it when I see the guillotine standing tall outside the black lacquered door of No. 10.

If England held an election today who would win? It looks like England is in so much turmoil that an election would produce an echo of what they have with the Conservatives still in control. I keep seeing reports like this: "So can the Tories win a majority?

The bookmakers seem to think so, with odds of 1/3 on the Conservatives gaining the most seats, followed by Labour, the Brexit Party and then the Liberal Democrats.

The latest polls also give the Tory party a 12-point lead over Labour, with 34% of the vote to Corbyn’s 22%. However, The Telegraph notes that “predicting the result is difficult, because the period of campaigning that follows an election being called usually changes the voting intention of the British public drastically”."


Britain may come full circle back to Cameron's ill-advised Scottish referendum especially now that the leader of the Scottish contingent of the Conservative Party has broken from the English Tories.

It seems no one knows what happens on October 31st, the Brexit deadline. It's one thing to pass a measure prohibiting a "no deal" Brexit but it's not entirely the Brits' call. They triggered Article 50 and, as far as Brussels is concerned, that's still on.

The Euros seem tired of it all, an unwelcome distraction. The Brits did themselves no favours when Nigel's group at the EU Parliament stood with backs turned at the opening ceremonies.

What more can the Brits demand at this point? Even the 'backstop' that causes Westminster such fits was a term demanded by their own government, in effect a concession granted by the Euros.

BoJo may now be prohibited from a no-deal Brexit but what is the alternative save for finally accepting Theresa May's 'deal'?

From what I've seen, many MPs and Lords are suffering real Brexit fatigue. They're fed up. It is consuming all the oxygen in the room, impeding their responsibility to govern.

If there is a hard Brexit on October 31st the ensuing chaos will probably shave more than a few points from the Tories' edge in the polls. Theresa May thought she had a comfortable margin when she called the last snap election.

Surely there is a lesson here, Mound, for anyone who fancies him/herself the smartest person in the room.

The leave campaign comprises of mainly baby boomers.
The world will be a better place when we are all gone.

The Led by Donkeys crowd seem to be the only Brits with any brains. Unfortunately one of the donkeys is Corbyn.

There are no donkeys in the UK , only Asses.
I spoke to an old friend in the UK this weekend.
He tells me that ( his passion) amateur dramatics is dying.
Obviously he does not look to the Palace of Westminster.


We forget that democracy is messy, something that has been revealed many times since Runnymede in 1215. Progress has not been linear nor without reversals and setbacks.

Of late, democracy has been more imperiled than at any time certainly within living memory.

As a kid growing up in the immediate post-war years I, like most of my fellows, thought democracy inviolate, the natural aspiration of all humanity. Then, as is the custom of humanity, we began to take it for granted. When we did that we allowed those who would benefit from undermining it to gain a foothold - Trump, Orban, Bolsonaro, Erdogan, le Pen, BoJo and the rest of the thugs.

My late father was not a political thinker but his horrible experiences of war seemed to have imbued him with an unusual respect for democracy. I can remember him telling me that we did not have a right or freedom that had not been paid for - in blood - often more than once. He explained that these same rights and freedoms had a considerable value to those who might deprive us of them so as to skew things to their advantage and that we had to be vigilant to hold these types at bay.


Re,
since Runnymede in 1215. Progress has not been linear nor without reversals and setbacks.

Arrrr Runnymede.
My great great great ,and more, grandfather was there shoveling the shit that came from the horses of the rich and powerful.
All he got out of it is that horseshit is good for growing roses.
All these years; so little has changed.
The Magna Carta was not the stellar game changer history reports it to be.

5:42...I learned of those same sorts of comments from my great grand father through my mother and her brothers who lived in England. My father was keen on making close to your father's comments. Do Politicians not know the perils of war and neoliberlism or do they say Fxxxx it and go for a drink? "I don't care about the future" Anyong