It's Not Extinction, It's Extermination 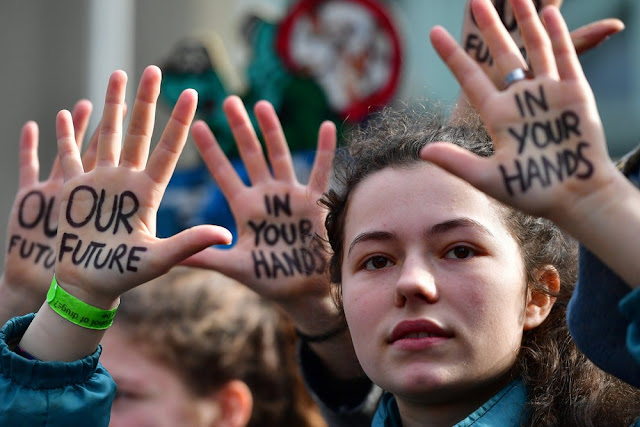 It's all in the eye of the beholder. To environmentally conscious adults it may appear that we're driving Earth to the point of extinction. Young people can see the deeper malevolence in what we're doing. To them it's extermination. Our greed-fueled quest for growth is a policy that, for them, is a process of extermination.

What does that mean for Liberals and Conservatives? Ask the Guardian's Jeff Sparrow. He writes that the climate strike campaign is a rebellion led by the young against "generations of betrayal."


The ecological disaster that confronts us today extends way beyond climate. Some scientists speak of the “sixth extinction event” – but, as Justin McBrien argued, that phrase isn’t accurate.

We might less euphemistically discuss a “first extermination event”. Nature is not dying so much as being killed, by people who know perfectly well what they’re doing.

The need for protests could not be more urgent – and, at last, they’re happening. The global strike provides a perfect antidote to the despair so many of us have felt for so long.

There’s a nightmarishness to the isolated experience of climate change: a sense of paralysis and horror at a world sleepwalking into disaster. By coming together on the streets, we shake that off, and we grasp something of our collective strength.

Atmospheric physics doesn’t care if we’re tired of marching or we feel that “done our bit”. Warming won’t be stopped by symbolism or fervent hopes: we need, as, the Intergovernmental Panel on Climate Change argues, “rapid, far-reaching and unprecedented changes in all aspects of society”.

That’s no small task, especially given the vested interests in the status quo. It would be foolish not to expect difficult times ahead.

...All over the globe, people have rejected the sacrifice of nature on the altar of greed. That should inspire us all to redouble our efforts. We need a new movement, akin to those that shook the world in the 60s and the 70s, and we have very little time to build one.

I have probably heard every rationalization possible of Canada's fossil fuel economy. The most despicable is Justin Trudeau's claim that we must ramp up production and export of bitumen as the means of building a green future for Canada. Who says shit like that? Who swallows it?

At this point I want, with hesitation, to tread into dangerous waters by noting some similarities between our rationalization over bitumen and the contortions that Germans went through to justify their dictator's rise to power.  They're not the same. No one is saying our political leadership are Nazis. Nor is six million dead quite the same as six billion dead now is it?

A helpful book that explores how a people can rationalize monstrosity is Milton Mayer's 1955 book, They Thought They Were Free, The Germans, 1933-45. Mayer, an American Jew of German ancestry and fluency, traveled to Germany in the immediate postwar years and befriended 10 fairly ordinary Germans. He dedicated his book "to my ten Nazi friends." Only two of them were real, hardcore National Socialists. The others were more apt to accept it as an inevitability, almost with indifference, yet willing to look the other way when required. The reader can see as each was captured by the movement of the day although with widely varying degrees of enthusiasm.

We are not malevolent actors. Canada is not 1930s Germany. Yet, when it comes to our generation's poison pill, we do reveal widely varying degrees of enthusiasm. There is a worrisome indifference to it and we do demonstrate an easy willingness to look the other way.  We might even grudgingly concede our path to extinction but we'll never accept extermination even if that's what we're doing.

Naturally, I'm in general agreement with the thrust of the post.

However, having read the following article (there are also five more I haven't yet digested) by Cory Morningstar, I've been somewhat disturbed that the Greta phenomenon seems to have co-opted by Swedish decidedly capitalist businessmen.

I'd like a second opinion if anyone has the time to read this blog:

If these surmises, rather solidly footnoted, are even remotely correct, we may have been "had" again. Well, there had to be something to loot post oil. How about our pension funds?


I don't know, BM. I read 'Act 1' and wasn't convinced. It is artfully written but sometimes makes risible assertions that seem awfully similar to conspiracy theory.

If I have time perhaps I'll check out the rest of it.

.. I splashed into the BM link for a sniff and a quick look see.. damn but its a huge essay and deep dark waters.. I slithered out quickly.. as its disturbing stuff. Pretty sure its way over my head.. I'm farm boy.. will give it a poke later but will scale up my speed read rate to max skim velicity & start somewhere near the middle or the end, bounce around & collect the gist.. Is there a summary statement there.. somewhere ? Maybe that what the Act descriptions are all about..