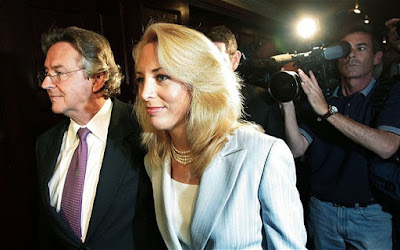 His wife, Valerie Plame, recently announced her bid for a seat in the Senate. Sadly, Joe Wilson won't be around to see how that turns out.

Joseph C. Wilson, the long-serving American diplomat whose clash with the administration of President George W. Bush in 2003 led to the unmasking of his wife at the time, Valerie Plame, as a C.I.A. agent, resulting in accusations that the revelation was political payback, died on Friday at his home in Santa Fe, N.M. He was 69.

Ms. Plame said the cause was organ failure.

...in 2002, by then a private citizen, he was asked by the C.I.A. to travel to that country to try to verify reports that Niger had sold a nuclear material, uranium yellowcake, to Iraq in the 1990s. At the time, the Bush administration was building to a crisis point with Iraq and its leader, Saddam Hussein, and among the issues was whether Iraq had or was developing nuclear weapons.

Ambassador Wilson concluded from his trip that the reports of a Niger-Iraq deal were false. After President Bush, in his State of the Union Message in January 2003, said that “the British government has learned that Saddam Hussein recently sought significant quantities of uranium from Africa,” and then ordered an invasion of Iraq seven weeks later, Mr. Wilson felt the record needed to be corrected.

It was just a couple of weeks ago that Valerie Plame released her first campaign ad.

Fact check: Plane is running for the House of Representatives, not the Senate.
Sorry to hear about Joseph Wilson's death.