Two Sides of The Same Coyne 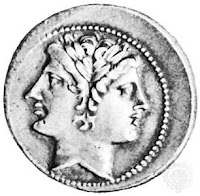 Andrew Coyne looks at the Trudeau Conservatives and the Scheer Liberals, or is it the other way around? Does it matter?

Of course, both parties have from time to time had their share of scandals, a Wright-Duffy here, an SNC-Lavalin there, but with a critical difference. For whereas the Liberals abuse power because they can — because being so often in government and so accustomed to its pleasures, no one expects them to do any differently — the Conservatives do so because they must: because being so rarely in government, they are at every disadvantage, between an uncooperative bureaucracy and a hostile media, and need recourse to every expedient just to even the scales. Or because the Liberals did it first. Or just because.

...Of course, elections are not just about the parties; they are as much or more about the party leaders. Here, too, voters will have to choose between two very different white middle-aged Catholic heterosexual males (themselves entirely unlike any of the white middle-aged Catholic heterosexual males — Dion, Martin, Chretien, Mulroney, Clark, Turner, Trudeau the elder — who preceded them).

Perhaps the sharpest point of distinction between the two can be seen in that traditional test of Canadian leadership, foreign policy. The two leaders would fail to exert any influence on the United States or China in completely different ways. On defence spending, though neither would come close to meeting our NATO commitments, one would feel more badly about it.

Still, the two leaders are alike in one respect, I’ll grant you. Neither wants anything to do with Doug Ford.

Now this will obviously spark outrage among Trudeau's true believers but that's mainly their fondness for a steady diet of horse shit. To an outsider, Coyne's words ring true. Between the two of them there's not much to like, they're both in the bag to the same special interests and neither of them really gives a goodgawdamn about the future of Canada.  Yes, the Tories have a clear lead in bigotry but, beyond that... meh.

Only once in my life have I made a firm decision not to vote and despite my firm belief that one SHOULD exercise one's franchise, if for no other reason than "at least I have a right to complain". Having said that, your comparison of the leaders (isn't that an oxymoron these days?) I'm just not ready for Punjabi Nation and Elizabeth May has show several signs of her American heritage that just don't light my fire either.

Unlike you Mound, I have looked at proportional rep wit a rather jaundiced eye. I just see more folks with differing ideas squabbling over the same sized pot of money. What to do??


Well, Lulymay, you can always join the ranks of the disaffected, many of whom either don't vote or vote against the candidate/party they most dislike. I've read that this year will be an especially auspicious "none of the above" election.

I find Scheer definitely more odious than Trudeau but I agree with Coyne that the distinction between them is not huge.

I get your reservations about May but the crossroads we're at outweighs them. We don't have another four years to squander.

Do you expect Coyne to say anything positive about a Trudeau?


He doesn't say anything positive about either of them, UU. I suppose to a Liberal there's a world of difference but, to be candid, I don't see it.

I hope that sufficient numbers of Greens and Punjabi Nationals are elected to ensure that whatever gang of market libertarians is elected to govern will be limited to a minority. Of course, most of the Punjabi Nationals in the electorate will still be voting for the Libs.

Okay John, that's enough of that.


Re
I find Scheer definitely more odious than Trudeau but I agree with Coyne that the distinction between them is not huge.

Scheer is a bible puncher the likes of which scare the shit out of me.
The world does not need another Stephen Harper or Mike Pence.

Those guided by god ( of your choosing) should be kept away from politics.