From America, A New Idea for Breathing Life Back Into Unions 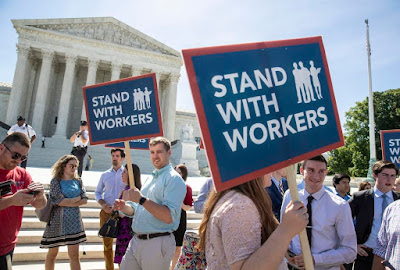 Some of us were lucky to live through the early postwar era marked by the advance of a truly broad-based middle class, a time of genuine prosperity. The middle class spanned the range from factory workers to skilled trades, office workers to artisans and the professions, blue collar to white collar.

That middle class was great for democracy as so many had a vested interest in government and a strong economy and saw that more wealth accumulated in the ranks of workers. Organized labour played a dynamic role in this period of advances.

Then Reagan, Thatcher and Mulroney ushered in the neoliberal contagion and reversed most of those popular gains. More of what previously had been the middle class dropped into the precariat. Wealth was sucked out of the blue and white collar crowd and into the pockets of the richest of the rich. Union membership plummeted. Corporatism triumphed. Democracy faltered. Here we are today.

In the mid-1950s, a third of Americans belonged to a labor union. Now, only 10.5 percent do, including a minuscule 6.4 percent of private sector workers; public sector unions took a hard blow in 2018 when the Supreme Court cut off a major source of revenue. The decline of union membership explains as much as a third of the increase in inequality in the US, has reduced voter turnout among low-income workers, and has weakened labor’s ability to check corporate influence in DC and state capitals.

...So a growing number of labor law experts and even presidential candidates (including Sen. Bernie Sanders, former Rep. Beto O’Rourke, and South Bend, Indiana, Mayor Pete Buttigieg) have settled on a new approach to revive the US labor movement. Major labor leaders like SEIU President Mary Kay Henry are embracing this strategy too, and shifting their organizations in turn.

Henry has dubbed this “unions for all” — an entire industry’s workers, that is, not just in one company. This approach involves moving beyond the traditional form of union organizing that you know from movies like Norma Rae, where unions organize workplace-by-workplace and fight tough battles for recognition, to an approach closer to that used in Europe or Australia.

This approach is called “sectoral bargaining,” and it could change the way work is done in the United States.

... Because unionization happens in individual companies and workplaces, the system is known as “enterprise-level” bargaining. And if you’re covered by an enterprise-level union contract, the system works pretty well. Unionized workers in the US enjoy significantly higher wages and better benefits than nonunion workers, and have greater recourse if they’re being mistreated by their employer.

Unions get higher pay for their members by demanding money that would otherwise go to shareholders and executives, and so the latter have every reason to fight union drives.

But according to Princeton economist Henry Farber and Harvard sociologist Bruce Western, an even bigger reason for the decline of unions than corporate resistance to organizing drives is that unionized companies in the US have added fewer jobs over time than their nonunion counterparts.

The slower growth has a few causes: Unions were most successful in now-stagnating or shrinking industries like manufacturing and transportation; investors are less willing to put money into firms where unions capture some of their profits; and unions increase labor costs for employers, who respond by hiring fewer workers. Western and Farber found that unionized firms’ slower growth accounted for most of the decline in union membership between the 1970s and ’90s.

But workers in most European countries, and some other rich countries outside the US, have figured out an ingenious way around this. Unions there bargain not at the company level but at the sector level — negotiating for all workers in an entire industry rather than just one company or workplace.

It's a thought-provoking article and I urge you to read it in its entirety. Neoliberalism is our scourge but today's governments show neither the ability nor the inclination to pry its claws from our throats. Our best hope begins by no longer imagining government works for us, those who elect those people to office.