No, You Must Be Thinking About "The Ghost of Canada Past" 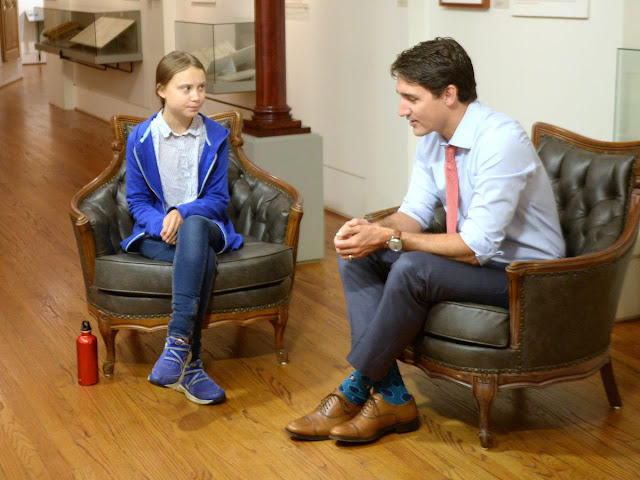 A sobering op-ed from The Globe's Gary Mason on why hopes that Canada will take "meaningful climate action" are wishful thinking.

It's not so much that he's saying something shocking. It's more that he's just saying it - out loud.


Once, this country led the global conversation that helped save the ozone layer. Now, in a climate crisis, we can’t even have an honest conversation among ourselves about what must be done to save us all.

...The idea that a hole in the sky now exposed us to the merciless impact of the sun captured the public’s imagination in a way few other environmental crises ever had. People imagined humankind literally withering into extinction as crushing temperatures became unbearable. A genuine panic set in.

Two years after the ozone’s gaping wound was detected, leaders from around the world gathered in Canada to sign the landmark Montreal Protocol on Substances That Deplete the Ozone Layer. (It has now been ratified by 196 countries and the European Union). The treaty radically reduced the amount of these materials – commonly known as Freons – being released into the atmosphere. Among other achievements, the accord has, over three decades, reduced the use of nearly 100 ozone-draining chemicals by nearly 100 per cent. It has helped cut the equivalent of 135 billion tonnes of carbon-dioxide emissions. The ozone hole, meantime, has shrunk considerably and is now about the size it was in 1988.


Canada’s role in the creation of one of the most powerful, and successful, environmental conventions ever undertaken is worth considering in the context of the federal election campaign and the current debate around climate change. This country was responsible for a mere fraction of the chemicals that had produced the hole in the ozone. But that didn’t stop us from playing a lead role in the creation of a manifesto that has done so much good for the world.

It’s also worth noting that the prime minister at the time was a staunch conservative, one who was also responsible for pushing Republican presidents Ronald Reagan and later George H.W. Bush on the issue of acid rain. His efforts would be rewarded in 1991 with an important treaty between the two countries that dealt with the issue. In fact, it can reasonably be argued that Mr. Mulroney did more for the environment than any other PM in our history.

An Election That May Be Our Last Best Chance to Act on Climate Change.


And yet here we are, more than a third of the way through the campaign, and there is nary a courageous, groundbreaking climate initiative in sight. Instead, the Liberals ended the week announcing measures to help make homes more energy efficient. While the time we have to mitigate the widespread damage a warming planet will cause evaporates before our eyes, we argue about the need for new pipelines. The debate around energy and the environment has become so caustic, so toxic, that our political leaders can’t even be honest with us.

There is no better example of this than when Liberal Leader Justin Trudeau said at a town hall event in Peterborough in January, 2017, that while he couldn’t shut down the oil sands immediately, “we need to phase them out, we need to manage the transition off of our dependence on fossil fuels.” It should not have been a controversial statement because it’s true. And yet, politicians in Alberta (and many citizens, too) lost their minds, accusing the Mr. Trudeau of betraying them, of forging a plan to rob thousands of people of their livelihoods. A few days later, Mr. Trudeau tried to undo the damage, saying that he “misspoke” – the oil sands would not be going anywhere soon, he assured Canadians.

I think that may have been the moment I decided meaningful climate policy in Canada was doomed. If a federal leader couldn’t even say what we know to be true – that we need to transition off of fossil fuels soon – then what hope was there of reducing greenhouse gas (GHG) emissions to the level we must, in the limited time we have?

Trudeau fanboys won't like to hear that. No, it's just another effort by the "Con media" to undermine the Dauphin. Heresy. Treachery. Only it's not. It's true, every bit of it.

Why is Gary Mason so convinced Canada is and will remain a "no show" on the fight to avert climate catastrophe? For starters he writes that neither of the two men who will elected (sort of, in a way) prime minister in October has anything resembling a plan to slash Canadian greenhouse gas emissions. A minuscule carbon tax is a nice gesture and the idea of perhaps planting trees is also a nice gesture but that's not going to put us on the right path.


This is all wonderful, but the thrust of their latest plan remains aspirational. Targets don’t reduce emissions by themselves; enforcement does. “Trust me” is not a climate policy.

Audits that have been conducted on the Liberals’ climate plan to date have suggested they are going to fall well short of their goals. Since the government introduced its first climate plan in 2016, it has purchased a pipeline and approved a massive liquefied natural gas project in B.C. It says it has put a cap on oil sands emissions of 100 megatonnes annually, but has refused to impose or insist on regulations to ensure that happens. There is also no schedule in place in which the cap begins to decline – a necessity.

When it comes to meeting our Paris obligations, we are having a completely dishonest conversation.

Mason's second argument is about the refusal of ordinary Canadians to back action on climate change.


The “new climate denialism,” a term coined by Seth Klein and Shannon Daub of the Canadian Centre for Policy Alternatives, doesn’t dispute that the Earth has a problem with greenhouse gases. What the new deniers refuse to accept are the measures necessary to reverse the effects of climate change before it’s too late.

It’s not just members of the public who are in denial, but politicians and the oil and gas industry as well. Everyone agrees there is a problem, but few are willing to accept the sour medicine it will take to do something about it. So, for instance, you have an NDP government in B.C. It talks a wonderful game when it comes to climate, but then green-lights a $40-billion LNG expansion that will make meeting its climate targets all but impossible.

Next is the refusal of the fossil energy giants to accept their fate, the price that has to be paid if there is to be a future.


...there is another form of denialism going on that is also responsible for the lack of progress we’re witnessing around greenhouse-gas reduction: a refusal by oil and gas companies to acknowledge that their industry’s days are numbered. A recent piece in The New York Times by Christiana Figueres laid it out in stark detail. The life of many of the world’s oil and gas companies, in their current form, could be as little as five years in some cases, but no more than 30 even in the most optimistic scenarios, predicted Ms. Figueres, who was the executive secretary of the United Nations Framework Convention on Climate Change. Markets have started to abandon many of these companies. Exxon Mobil was the last big oil giant remaining in the top 10 of the world’s most valuable companies – until it dropped out earlier this month for the first time.

Norway’s massive sovereign wealth fund recently decided to get rid of nearly US$6-billion in oil and gas investments. The European Investment Bank, the world’s largest multilateral financier of climate-related investment, has proposed ending the underwriting of fossil-fuel infrastructure by 2020, including for gas. And the Danish pension fund is removing the top 10 major oil companies from its portfolio because their business models are incompatible with the Paris accord.

But you would never know any of this living in Canada. Here, talk of transitioning off oil, or the industry not having a bright future, is verboten in places such as Alberta and Saskatchewan. This denialism only serves to delay the implementation of measures critical to climate success.

Last is the vitriol that makes an honest conversation about climate change difficult if not impossible.


Some of this is certainly the result of the times in which we live. Alberta Premier Jason Kenney, for one, has relied on often incendiary oratory to get supporters riled up against the Liberal government in Ottawa, which he blames for trying to kill the oil industry. (Even though it bought a pipeline.) But a phalanx of conservative premiers has railed against the dangers of climate measures that will “kill the economy.” The doubt these politicians have sowed in the minds of the public may be having an effect. A recent survey by the firm Ipsos found nearly half of those polled thought scientists were elitists whose findings they discounted because they don’t align with their personal beliefs. Other polls have shown that people believe climate change is real but don’t want to sacrifice much to reverse its effects – a result no doubt influenced by the words of politicians who have convinced many Canadians that measures such as a carbon tax are a mere money grab that will have no measurable impact on GHG emissions.

If you can't accept this because it all sounds so nihilistic and, after all, we're Canadians and we don't do this sort of thing, it's time to step off that pedestal. Yes, we're among the best educated people anywhere. Yes we're prosperous and relatively free of the worst cultural and political blights now besetting other nations. We wouldn't choose to burn it all down, not us. Only history offers several examples of civilizations that did knowingly choose their own ruin. Usually it's greed-driven. Choices are taken to benefit the current generation knowing that a future generation will pay a horrible price. Warning signs are ignored, dismissed as they worsen. Then, eventually, that final straw breaks the camel's back. And, whether you're voting for Justin or for Andrew, that's what you're buying with your ballot.

BTW, that photo of Thunberg and Trudeau. Is it just me or does Greta look like she's heard his bullshit before?

Can we please just skip all the preliminaries and somehow make Greta the head of the UN. Today!
We need more of her on the 'global bully-pulpit' right now. ;-)

.. two closely linked posts from you today.. require rereads..
but great food for thought n action re the 'uplifting' approach..
Especially in light of the duplicity and stupidity from 'Public Servants'
Technology via 'spiders from mars' seems the Scheer solution
Growing emissions to lower emissions seems the Trudeau fix
Singh seems a waffler, ever hopeful
Ms May.. needs help with her rowdy splintered group

I look at the provinces.. and simply cringe
I recognize ya cannot do good deeds without being elected
but.. seems good deeds are best achieved via hand waving ?
Jason Kenney and Doug Ford are simply 'full of it' & screetching
full attack mode.. partisan phasers on stun

Greta's not impressed with JT or indeed any other "leader". Pretty obvious in this CBC article which uses the same CP photo used here.

So I'd agree - she's heard it all before, much like David Suzuki has.