If You're Looking for West Coast 'Granola Munchers' Here's Where You'll Find Them. 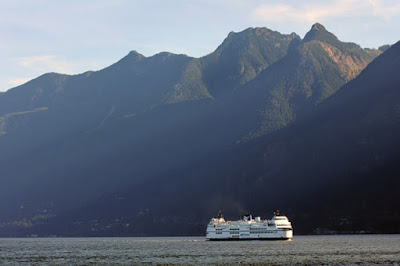 There's no federal riding that compares with West Vancouver - Sunshine Coast - Sea to Sky Country, the toniest part of BC that reaches way up to the ski resorts of Whistler and beyond.  A lot of money in that riding. A lot of 'concerned citizens.' Woke people.

Barring some sort of climate apocalypse over the next month, one of two parties will emerge after the October elections to govern Canada, Liberal or Conservative.

So, what do the Liberal and Conservative candidates have to say about the gravest threat ever to face our nation? As it turns out, not very much.

Let's deal with the Tory first.


Gabrielle Loren is the Conservative Party candidate for the riding. She is the founder of a local accounting firm and previously worked for the Canada Revenue Agency.

In a statement to CBC News, she re-iterated her party's plans to tackle climate change by investing in technology. Under the Conservative platform, Canadians who make their homes more energy efficient will receive tax credits, while encouraging "green research, development, and innovation."

She also doubled down her party's plan to axe the carbon tax.

While noting that climate change is an issue that affects her community, she said she also has other environmental concerns, like sewage contamination and abandoned vessels in the Howe Sound.

Loren says she would ramp up law enforcement to ensure the area is protected.

So Gabrielle thinks arresting climate change is a law enforcement issue. In other words the Liberal is up against a climate knuckle-dragger. So, is he really much better?

Weiler, 33, told CBC News he commends the Trudeau government's Pan-Canadian Framework on Clean Growth and Climate Change — a federal strategy aimed at meeting 2030 emissions reductions targets through carbon pricing, a switch to electric vehicles, and by phasing out coal.

"I really see this suite of policies as quite groundbreaking, and one that took a lot of political capital to negotiate, and it has the key items of the addressing climate change," said Weiler.

Locally, Weiler says his party would look to invest in local green technology companies, like the Squamish-based Carbon Engineering, to meet its climate goals.

It sounds good but it's a gutload of greenwash. The Pan-Canadian Framework is a re-packaging of Stephen Harper's emissions cuts policy. Not 50 per cent by 2030, just 30 per cent by 2030. And Justin Trudeau's government is not even on course to meet Harper's targets.

You know when people will wake up . When one summer in a major eastern city has a terrible heat wave and then black out and 60 thousand people die from the heat. Or in South Asia they reach the heat humidity point where sweating will not cool the human body and millions die. It's going to happen. I think things are going to progress at an exponential pace as feedback loop after feedback loop spin out of control. There are way to many forces aligned against any action towards oil and money ruining the only home we have . Or will have. There is no lifeboat, no second earth ANYWHERE near our little blue speck. These people who everyday fight to keep the status quo and bleed our host dry are truly parasites. Too bad they want to take their's and everyone else's children with them.


Jason, I share your sense of futility. Like the legend of the frog in a pot of heating water, it is very difficult to imagine public opinion demanding meaningful action until it's too late.

Science tells us that climate change is not linear. Anthropology shows us that collapsing civilizations follow a pattern. Civilizations fail abruptly and always at their zenith. That seems to be the result of perpetuating destructive behaviours which is exactly what we're doing, nationally and globally, at the moment.