Fighting Back. Monbiot on Civil Disobedience in the War Against Climate Change. 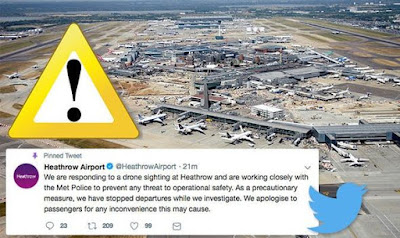 It's pretty clear now that fighting climate change means fighting power, fighting authority. Across the political spectrum it is increasingly difficult to find people in positions of power willing to abandon the status quo and, in the affluent West, that means the neoliberal model of perpetual exponential growth coupled with continued reliance on cheap, climate wrecking fossil fuels. Those in power and authority will not be moved without a fight and, in this case, it'll be a fight for survival.

There have been plenty of protests and demonstrations, blocking roads, that sort of thing. It's not enough.

In Britain there are plans for a new form of civil disobedience - swarming the giant Heathrow airport with drones, shutting the place down. George Monbiot argues that it's an essential next step.


We owe our right to vote, our freedom from servitude and subjection, our prosperity and security to people reviled in their time as lawbreakers and reprobates. Breaking the law on behalf of others is a long and honourable tradition. Next week, a few dozen unaffiliated activists intend to start something they call Heathrow Pause. They will each fly a toy drone within the restricted zone around Heathrow airport. The drones will fly nowhere near the flight paths, and never above head height, ensuring they present no risk. But any drone activity forces the airport to suspend all flights. The activists know they face arrest and possibly long prison sentences.

Their plan is to launch their drones consecutively, stopping flights for as long as possible: perhaps for several days. In doing so they seek to denormalise one of the most destructive activities on Earth. Once unthinkable, then a bizarre novelty, then an extraordinary luxury, then a hope, then an expectation, flying – and flying frequently – is now treated as a right. Worldwide, the number of flights is expected to double in 20 years.

Those who defend the sector point out that it currently produces “only” 2.4% of the world’s emissions. But this is because just 20% of the world’s people have ever flown. In terms of individual impact, taking a flight, because of the quantity of fuel it uses, inflicts more harm on the living planet and its people than anything else you are likely to do.

Even in rich nations, flying is overwhelmingly concentrated among the wealthiest citizens. In the UK, 15% of the population accounts for 70% of flights. Those most likely to fly frequently, according to House of Commons research, have a second home abroad and a household income of more than £115,000. We are told that flying is about freedom. It is: the freedom of the rich to destroy the lives of the poor.

As flying expands, it will become one of the principal causes of global heating. The impact is already greater than the 2.4% of emissions suggests, as planes create cirrus clouds that roughly double the overall heating effect. There are technological alternatives for most of our damaging activities – but not flying.

...The socially just solution is the frequent-flyer levy proposed by the Free Ride coalition. There would be no aviation tax for the first flight in any year that a person takes but escalating taxes on subsequent flights. Set at the right level, the levy would avert the need for airport expansion, and steadily scale down the industry. But don’t expect the government to listen. The new transport secretary, Grant Shapps, was previously chair of the British Infrastructure Group, which lobbied “to ensure that every opportunity for growth is seized”, backing airport expansion and a reduction in air passenger duty.

Nothing will change until the impacts of flying become salient. One of the Heathrow Pause campaigners, Valerie Brown, told me: “I’m petrified, of course ... It’s not easy to face the idea of prison, but it’s even more frightening to me to think about what my grandchildren and all the children of the world will face in 20 or 30 years’ time.” Another, James Brown (no relation), explained that he decided to act when he found his adult daughter had broken down with grief about ecological destruction. “I’m prepared to face the consequences,” he said. “I don’t know what prison will be like for me. But against the alternatives it’s a small price to pay.”

They risk their liberty in the hope of freeing us from the momentous consequences of climate breakdown. History will judge them kindly.

Rationing of energy is the solution.,
I would squirm if that should happen , but we have few alternatives that would work.


Those to whom we entrust the levers of power would never hear of it, TB. Their credo holds we must consume ever more until we drop.

You can thank smart people, that not everyone lives in Alberta for there is not one good idea at all to fight our "Climate Crises" here. If everyone were to support those people willing to shut Heathrow down, they could not jail millions of people. Anyong

If there's not enough room in the jails they'll have to kill them.