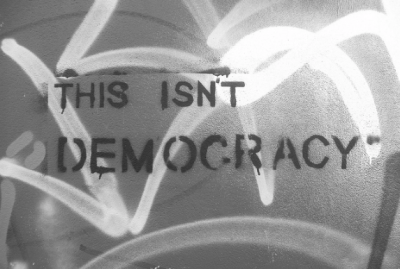 Is Justin Trudeau a defender of democracy? No. What about Andrew Scheer? Hell no.

Both of those hustlers think it's just dandy that Canada should be ruled* on the strength of less than two votes out of five so long as one of them is the winner.  They're not interested in governing with the consent of the people. The last thing either wants is to be at the mercy of an informed electorate. And so one side makes empty promises to lure in the rubes while the other appeals to the darker instincts of its followers. They may only get less than two out of five votes but a goodly percentage of their catch are what Jacques Parizeau described as lobsters for the pot  - you catch them, in his case that meant getting them to vote for Quebec separatism, and then you get them into the boiling cauldron before they know what's happened. You tell'em whatever they want to hear and then you boil them up.

*Being governed and being ruled are not the same. We're supposed to be governed with the informed consent of the electorate. When three out of five don't support you, that's not consent. When you get a minority of support on the strength of empty promises or fear mongering that sure as hell is not informed consent either. It's not democracy. It's a pretence and it's the Canadian way. We are a ruled people.


Perhaps the demise of democracy is inevitable. A new paper by a prominent social scientist concludes that democracy is finished.


A brief three decades after some had heralded the “end of history” it’s possible that it’s democracy that’s nearing the end. And it’s not just populist rabble-rousers who are saying this. So is one of the establishment’s pioneer social scientists, who’s daring to actually predict the end of democracy as we know it.

[Shawn] Rosenberg, who earned degrees at Yale, Oxford and Harvard, may be the social scientist for our time if events play out as he suggests they will. His theory is that over the next few decades, the number of large Western-style democracies around the globe will continue to shrink, and those that remain will become shells of themselves. Taking democracy’s place, Rosenberg says, will be right-wing populist governments that offer voters simple answers to complicated questions.

And therein lies the core of his argument: Democracy is hard work and requires a lot from those who participate in it. It requires people to respect those with different views from theirs and people who don’t look like them. It asks citizens to be able to sift through large amounts of information and process the good from the bad, the true from the false. It requires thoughtfulness, discipline and logic.

Rosenberg argues that democracy is devouring itself.


We’re to blame, said Rosenberg. As in “we the people.”

Democracy is hard work. And as society’s “elites”—experts and public figures who help those around them navigate the heavy responsibilities that come with self-rule—have increasingly been sidelined, citizens have proved ill equipped cognitively and emotionally to run a well-functioning democracy. As a consequence, the center has collapsed and millions of frustrated and angst-filled voters have turned in desperation to right-wing populists.

His prediction? “In well-established democracies like the United States, democratic governance will continue its inexorable decline and will eventually fail.”

We don't bring thoughtfulness, discipline and logic into the polling station. Not any more.


Unfortunately, evolution did not favor the exercise of these qualities in the context of a modern mass democracy. Citing reams of psychological research, findings that by now have become more or less familiar, Rosenberg makes his case that human beings don’t think straight. Biases of various kinds skew our brains at the most fundamental level. For example, racism is easily triggered unconsciously in whites by a picture of a black man wearing a hoodie. We discount evidence when it doesn’t square up with our goals while we embrace information that confirms our biases. Sometimes hearing we’re wrong makes us double down. And so on and so forth.

Our brains, says Rosenberg, are proving fatal to modern democracy. Humans just aren’t built for it.

...“In sum, the majority of Americans are generally unable to understand or value democratic culture, institutions, practices or citizenship in the manner required,” Rosenberg has concluded. “To the degree to which they are required to do so, they will interpret what is demanded of them in distorting and inadequate ways. As a result they will interact and communicate in ways that undermine the functioning of democratic institutions and the meaning of democratic practices and values.”