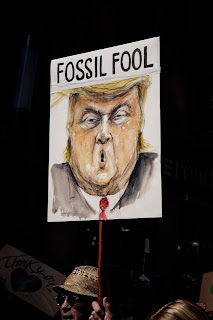 Tom Friedman thinks the way to drive Trump out of the Oval Office is to go all environmental on his ass next year.

I know, it's Tom Friedman but he has an interesting idea. Just as Kennedy inspired Americans with the space race the Dems should proclaim an Earth Race and use it to club Trump like a baby Harp seal.

Yes, I know, mitigating climate change and saving the environment never poll well. But times change, and it depends how you frame the issue. Mother Nature is forcing herself onto the ballot, and Trump’s efforts to roll back more than 80 rules and standards protecting clean air, water, climate, parks and wilderness make him uniquely vulnerable. He can’t pivot away from what he’s doing. He owns it, and it’s villainous. This time is different.

...I’m all for strengthening Obamacare and even adding a public health insurance option. But if I were running for president against Trump, I’d be leading with the Earth Race as an economic opportunity, a national security necessity, a health emergency, an environmental urgency and a moral obligation. No other issue can combine those five.
I’d pound Trump every day with this message: “Trump says he cares about you. Well, that’s funny, because he clearly doesn’t care about the water you drink. He just revoked a rule that prohibited coal mining debris from being dumped into local streams — among other actions to weaken the Clean Water Act — so that pro-Trump coal companies can make more money while they make you sick. What kind of president does that?

“Trump says he cares about you. Well, that’s funny, because he clearly doesn’t care about the air you breathe. He’s weakening clean air rules so that power and coal companies can emit more pollutants, methane and carbon dioxide into the air — so they can make more money and give your kids more childhood asthma today and disruptive climate change tomorrow. What kind of father does that?

“Trump says he cares about making America great again. Well, that’s funny, because he clearly doesn’t care about American automakers and their supply chains. He’s trying to force California and other states to weaken their gas mileage and pollution standards so our companies — which don’t even want this change — can make gas guzzlers and no longer produce cars that get mileage as good as those in Japan or emit as little pollution as China’s expanding electric car fleets. Who the hell does that?

“The last time our auto industry indulged in a race to the bottom on mileage and pollution standards, it went bankrupt. That’s why automakers are resisting Trump’s effort to dumb them down. There are 42 Chinese companies actively manufacturing and selling electric cars in China right now — and they can’t wait to ship them here once Trump forces our manufacturers to make more polluting gas guzzlers.

“Trump says he’s pro-business. Well, that’s funny, because he’s trying to expand the use of polluting coal when both wind and solar are now cheaper in many locations, including red states. Even Texas is enjoying the cost, environmental and job-creating advantages of wind over coal, producing almost twice as much wind energy as California.

...How do you run against all these things Trump’s doing? With a simple message repeated over and over: “Trump is poisoning Americans and weakening America. Join the Earth Race. Make America healthier, wealthier, smarter and more secure.”

"Just as Kenney inspired Americans with the space race..." Uh, Kenney has trouble even inspiring someone to date him. Kennedy never had that problem!

Friedman poses some very good and logical questions, but how would Trump counter them? Remember that he doesn't have to make much an argument to keep his admirers in line. Take a look at your dumbest neighbour; he's the guy who'll never admit that he's been wrong. Or just take a listen to the incoherent ramblings that flowed out of Trump today at the questioning by the press that followed his meeting with Zelensky, and then remind yourself that to Trump's admirers that gibberish was a brilliant and strategic presentation of the facts.

The above "wealthier" is why we are in such a friggin aweful state .
We are living on our grandchildren's inheritance as it is.
All you can eat, we will give you credit if your mother won't, the promise of 35+ years mortgages, phones you never own,seven year car payments; what next?
Next year we have the possibility of a correction!
That is, a market crash that as it unfolds will leave the 1% ,and perhaps others, cleaning up after the masses have crashed and burned.
Which will leave them with even more control of our lives.

One could play with that .. the question is.. will the Democrats come up with a credible nominee.. or go all wishy washy with Biden... who's also a fossil.

That makes me think about Stockwell Day et al up thisaway.. and those so called evangelical zealots who think the earth is 6000 years young.. implying that man walked among the dinosaur.. perhaps plowed the earth behind teams of scaly reptilian beasties.. We really don't know what Andrew Scheer thinks on the matter & I suspect his daily calls to Harper bring the dark masters stern warning to keep his lips sealed on such matters

By the bye.. I noticed a recent Twitter conversation between Warren Kinsella and Hamish's wife Kathryn.. who is certainly not the sharpest knife in any drawer.. It went somethink like this. 'Warren' - 'our job is to come down from the hills to shoot the wounded' and 'Kathryn' - 'well someone has to finish them off' .. Zounds, Mound.. that's a tiny slice of bizarre, non ? Yes yes.. I understand and can apply context.. but I frame grabbed that for posterity and retweeted it.. mentioning I would delete the frame grab, only if Warren Kinsella asked me politely, to do so. Keep in mind that Kathryn Marshall is laughably (OK, stupidly) connected evermore to 'Ethical Oil' - Jason Kenney - Stephen Harper - Andrew Scheer etc etc. I hope you found 5 minutes to speed through the link I provided previously to Amy MacPherson's detailed examination re the blackface photo's provenance and pathway. The kind of partisan background within Canadian politics and media makes me want to puke.. but then I'm alreading puking over the nonsense going on behind the scenes and during our elections.

Americans seems intent on screwing themselves and the rest of the planet over.. and living in denial. Anything that upset their applecart.. or our Canadian turnip heads intrigues me.. I do believe we need to go 'full guerilla' mode and have said so many many times.. We need thousands of Paula or Paul Reveres - Laura Secords pounding up and down the pike.. 'the fossils are coming, the fossils are coming'