The Only Question Is Who Will Be Kissing Bibi's Ass. Will It Be Justin or Andy? 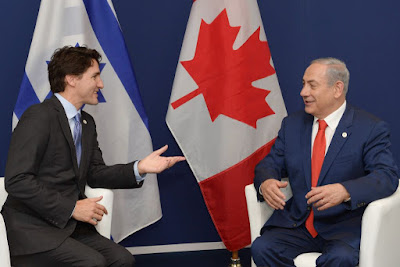 Canada has its nose so far up Benjamin Netanyahu's backside that our leaders seem to have become pleasantly accustomed to the smell. Trudeau or Scheer, no matter, they can't get enough.

I guess that, short of nuking the Gaza Strip, Bibi can do as he likes as far as Ottawa is concerned.

There are Palestinians in Gaza who have been born and have died there as captives, completely innocent of any crime and yet confined to their equivalent of the Warsaw Ghetto.

I just checked a few days ago and it seems Gaza's already salinated and contaminated ground water will run out next year. It won't be long now before the place is uninhabitable. But Canada looks the other way even intimidating those who criticize Israel, denouncing them as anti-Semitic.

It's a safe bet that Canada won't change course if/when Netanyahu 'annexes' the Palestinian territory known as the Jordan Valley. 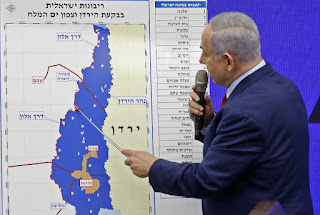 Sure they're Palestinian lands but Bibi can fix all that with the stroke of a pen - so long as he has the US and Canada to give him cover.

Here's what currently remains of the Palestinian West Bank. 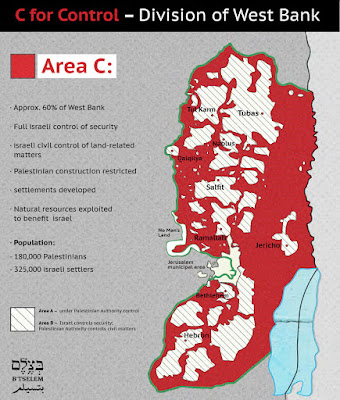 In case you're guessing, yeah, the Palestinians get the white bits - well, except for Jerusalem. I'm sure if they put their minds to it they can create a country out of those shards somehow - unless they're 'annexed' next.

That Red and White Greeting Card is Netanyahu's way of saying there will never be a two-state solution. Israel will remain an apartheid state unless it gets the Palestinians shipped out to Jordan. The saying of that, no matter how obvious, is sufficient to be branded anti-Semitic. The Liberals once had more guts than they do now. They once could tell right from wrong, even when both sides were wrong.

The editorial board of The Guardian had this to say:


Benjamin Netanyahu’s plans to annex Palestinian territory in the occupied West Bank – and, crucially, seize the bread basket of the Jordan valley – if he wins the Israeli election next week are not only illegal under international law but would, if enacted, make peace impossible in the Holy Land. Neither of these things appears to bother Mr Netanyahu, who refuses to recognise the Palestinian right to national self-determination and statehood.

The Likud leader framed his land grab as a defensive measure, yet – as Wednesday’s rocket exchanges show – his country’s military is busy on Israel’s western flank, not its eastern one. Missiles can vault the valley, puncturing the security argument that it could provide a buffer against an Arab invasion or guerrilla infiltration from the east. Israel seized the West Bank from Jordan in the 1967 war. It is worth noting that in 2001, in peace talks with Palestinians, Israeli security officials suggested an offensive utility for the Jordan valley, saying that if its peace treaty with Jordan was violated then the space afforded by the fertile strip could provide a useful way to “take action”. Given Israel’s recent offensive strikes outside its borders, this might explain why security arguments have resurfaced.

Just how warped Israeli politics has become is evidenced by the fact that the main opposition coalition – Blue and White – were incensed not by the idea of annexing the Jordan valley but that Mr Netanyahu had not credited themwith thinking of it first. The Jordan valley may not be the strategic asset it once was. But it has an undisguised potency in Israeli politics, as a Palestinian state was always thought to border Jordan. It matters not whether Mr Netanyahu wins or loses the election, since it is hard to see a Knesset that would block the land grab.

Mr Netanyahu can also count on the support of Donald Trump, who has destroyed the United States’ honest-broker role. The US president rashly recognised Jerusalem as Israel’s capital and endorsed the illegal seizure of the Golan Heights. He has cut off humanitarian aid to Palestinians. Mr Trump’s key Middle East officials – his ambassador to Israel, his son-in-law and his former special envoy – are all supporters of the settler movement to build housing in the West Bank for Israeli Jews in contravention of international law. Like Mr Trump, another rabble-rousing politician, Mr Netanyahu is prepared to sacrifice almost anything on the altar of domestic politics. He dismisses the occupation, 52 years of Israeli military rule over Palestinians, as “nonsense”. Yet what is the upshot of such thinking? Millions of Palestinians will end up living in segregated enclaves in the middle of the West Bank, with no real political rights and under separate legal and education systems. They will be dirt poor and under a permanent military occupation, with their movements curbed. How would the country reconcile a permanent occupation with its democratic ideals? Israel would not be building peace, it would be constructing a giant open prison.

I keep deciding to vote Green (consistent on climate) ... then backtracking

both remind me of the (much more serious) BDS flap.

The NDP is inconsistent on the climate but relatively consistent (with a long track record) on other issues.


You'll recall, NPoV, that the Green party membership held firm on Palestine and defied May's threat to quit. The membership is focused on critical issues, not partisan politics or seeking to form government. It wants leverage to steer government. We all know there's not nearly enough time to go for the brass ring.