The Biggest Difference Between Boris Johnson, 2019, and Stephen Harper, 2008. 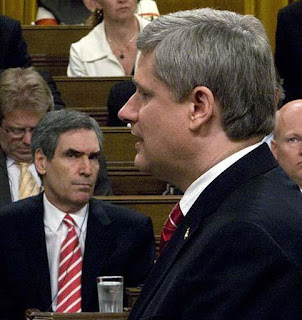 Boris Johnson tried to prorogue Parliament and he got ingloriously shot down - first by the high court of Scotland and then by the entire 11 judge panel of the British Supreme Court.

Flash back to 2008.  Stephen Harper, facing a similarly unruly Parliament, hopped a ride over to Rideau Hall and sweet talked Michelle Jean, always a doubtful starter, into proroguing our Parliament.

What's the difference? That would be the Ignatieff Liberals, forerunners of the current Trudeau Liberals.

The Liberals failed Canada. They didn't raise a finger to defend parliamentary democracy. Iggy used the extra time off to finish a biography of his mother's family, the Grants.

Stephen Harper stymied Parliament and got away with it. BoJo tried to stymie Britain's Parliament but the opposition stood up for Britain and soundly defeated Johnson in the courts.

2008, that's when my 40-year allegiance to the Liberals ended. What had been was no longer. Still isn't.
Posted by The Mound of Sound at 9:57 AM

I managed to watch some of the British Supreme Court hearings. Things went badly for BoJo's QC when he tried to introduce cabinet documents to show some legitimate purpose for shutting down Parliament. The court asked for BoJo's affidavit attesting to the truth of the documents. The QC didn't have one, no doubt because his client, notoriously stingy with the truth, didn't want to face cross-examination on it. Their Ladies and Lordships were not impressed.

I was impressed, however, at how quickly the matter was heard by the courts in Scotland and England. I've never seen the SCC move that fast on anything.

I believe the SCC accommodates expedited hearings in the face of urgency, Cap.

I believe you're right, Mound. Yet the people suffer in great pain because the assisted dying challenges don't seem to meet the definition of urgent.


I have your point, Cap. Last I heard Joe Arvay was nearing the granite palace in Ottawa. Yes, people are being consigned to suffer in great pain, their Charter rights trampled underfoot by compassionate Justin's Liberals. Let's remember that then Justice Minister Jody played an instrumental role in shaping that brutal outcome.

To your original point, Mound, Iggy's cowardice was inexcusable in the face of Harper's first prorogation to avoid a no-confidence vote in 2008. Even worse, in my view, was Iggy's acquiescence to Harper's second prorogation in 2009. This allowed Harper to forever bury the question of his own complicity in the torture of Afghan detainees. We missed an important opportunity to hold the PM to account and to shed light on crimes committed in our name in Afghanistan.

My takeaway from the different outcomes in Canada and the UK is that the enforcement of parliamentary rules can't be left to parliamentarians alone. Electoral, financial and personal considerations will always cloud the judgment of our MPs, just as it clouds the judgment of US congress members who have long allowed flagrant rule-breaking to go unpunished.

Britain and indeed all Westminster-style parliaments owe a great deal of thanks Gina Miller, a private citizen with a passion for parliamentary procedure. Ms Miller first put an end to Teresa May's attempt to trigger Brexit without a vote in parliament, then she put the boots to BoJo's prorogation. This is evident from the prorogation case's style of cause: R (on the application of Miller) (Appellant) v The Prime Minister (Respondent) et al. Similarly, it was private citizen Rocco Galati who killed Harper's attempt to appoint an unqualified judge, Marc Nadon, to the SCC. We are routinely told that the individual's sole role in a democracy is to vote for one of the parties on the ballot. This is so very wrong. Without committed citizens, our leaders allow parliament to wither and die.

Excellent, Cap. Many thanks. Yes, we have a right to vote but it carries with it responsibilities to defend Parliament and our democracy.

How are Cdn pols feeling today?

Harper will be smug, he out-thugged Bojo!
And, as head of the shadow-fascist org (International Democrat Union (IDU)) he likely gave Bojo advice on this, LOL)

Scheer wishes he'd had half of Bercow's integrity. Let's not forget who was the speaker back then.

M. Jean: regretful, but the Queen made the same (wrong) call.

Jr calls Butts to get an explanation.

Dion is somewhat vindicated. He couldn't go to the courts with two knives in his back: Iggy's & the media - don't forget their shameful behavior in this episode.
Plus Dion was pretty incompetent: Jeremy Corbyn keeps playing chess while his opponents play "chequers".