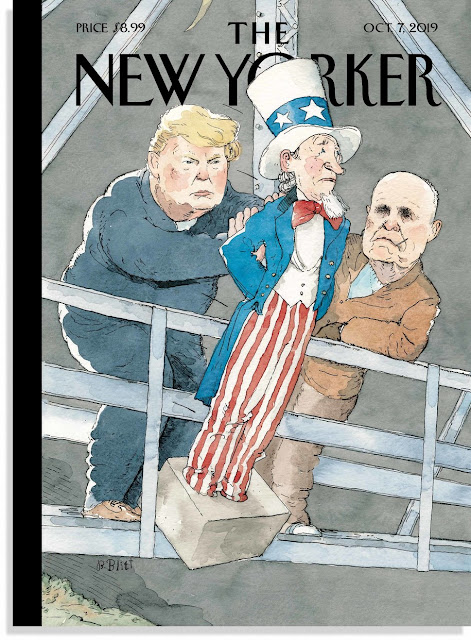 .. kind of a Hunter S Thompson bit of imagery ..
these folks are worse than grave robbers, far far
Distorted villains, thieves, liars, manipulators
Their fuel is GREED .. as is their 'currency'
American Traitors.. nothing more, nothing less

Thus thanks to the new counter-establishment, what could have been a mortal threat to Reagan and Bush became merely an inconvenience. And that was 30 years ago. Like a small amount of bacteria exploding exponentially in a patient with a weakened immune system, the conservative counter-establishment has taken over the host organism and become the establishment itself. Millions of Republican voters are told in loving detail why all the accusations made against Trump are damnable Democratic lies. There may be, as former Arizona GOP senator Jeff Flake claims, 35 Republican senators who’d vote to impeach Trump if they could do so in secret. But they can’t. It’s difficult to imagine any will fear being primaried for being insufficiently supportive of Trump less than the consequences of sticking with him.

So Nixon might have lost 45 years ago. But Nixon’s vision has almost certainly won, all to the benefit of a president even more venal than he was.

Picking winners and losers within the USA is easy compared to seeing the whole picture that is a swamp ( yes there is such a thing) of political figures.
Craig Murray paints an interesting picture of today's events.

Until we arrive at a point where we say fuck it it's all bollocks we have little alternative than to go full fledged Hong Kong!!