Is Washington the Place Democracy Dies? 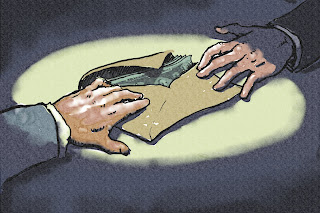 There's been a good deal of focus lately on the uncertain future of democracy across the globe. There was Shawn Rosenberg's paper suggesting that we've become so "dumbed down" that our brains can no longer handle such things as self-rule. It's not the result of Donald Trump. If anything, he's only a manifestation of a decay that has been nurtured for decades.


Democracy is hard work. And as society’s “elites”—experts and publicfigures who help those around them navigate the heavy responsibilities that come with self-rule—have increasingly been sidelined, citizens have proved ill equipped cognitively and emotionally to run a well-functioning democracy. As a consequence, the center has collapsed and millions of frustrated and angst-filled voters have turned in desperation to right-wing populists.

His prediction? “In well-established democracies like the United States, democratic governance will continue its inexorable decline and will eventually fail.”

If you haven't watched Idiocracy this might be a good time to get your hands on a copy.

In his latest column, economist Paul Krugman, also addresses the undermining of democracy in the American government to the applause of a large segment of the American people.


In their 2018 book “How Democracies Die,” the political scientists Steven Levitsky and Daniel Ziblatt documented how this process has played out in many countries, from Vladimir Putin’s Russia, to RecepTayyip Erdogan’s Turkey, to Viktor Orban’s Hungary. Bit by bit the guardrails of democracy were torn down, as institutions meant to serve the public became tools of the ruling party, then were weaponized to punish and intimidate that party’s opponents. On paper these countries are still democracies; in practice they have become one-party regimes.

And the events of the past week have demonstrated how this can happen right here in America.

At first Sharpiegate, Donald Trump’s inability to admit that he misstated a weather projection by claiming that Alabama was at risk from Hurricane Dorian, was kind of funny, even though it was also scary — it’s not reassuring when the president of the United States can’t face reality. But it stopped being any kind of joke on Friday, when the National Oceanic and Atmospheric Administration issued a statement falsely backing up Trump’s claim that it had warned about an Alabama threat.

Why is this frightening? Because it shows that even the leadership of NOAA, which should be the most technical and apolitical of agencies, is now so subservient to Trump that it’s willing not just to overrule its own experts but to lie, simply to avoid a bit of presidential embarrassment.

Think about it: If even weather forecasters are expected to be apologists for Dear Leader, the corruption of our institutions is truly complete.

Even more compelling, writes Krugman, is the US government's war on the American auto industry for sticking with Obama's plan for increased fuel efficiency standards. Now Trump has unleashed the Justice Department on the car makers.


In a remarkable rebuke to the administration, they have reached an agreement with the State of California to comply with standards nearly as restrictive as the Obama rules even if the federal government is no longer requiring them.

Now, according to The Wall Street Journal, the Justice Department is considering bringing an antitrust action against those companies, as if agreeing on environmental standards were a crime comparable to, say, price-fixing.

This would be disturbing even if it came from an administration that had previously showed some interest in actual antitrust policy. Coming from people who heretofore haven’t indicated any concerns about monopoly power, it’s clearly an attempt at weaponizing antitrust actions, turning them into a tool of intimidation.

And it’s also clear evidence that the Justice Department has been thoroughly corrupted. In less than three years it has been transformed from an agency that tries to enforce the law to an organization dedicated to punishing Trump’s opponents.


Which brings to mind an article I read yesterday in Scientific American, "The Contagion of Corruption."

Corruption, big or small, impedes the socioeconomic development of nations. It affects economic activities, weakens institutions, interferes with democracy and erodes the public's trust in government officials, politicians and their neighbors. Understanding the underlying psychology of bribery could be crucial to tackling the problem. Troublingly, our studies suggest that mere exposure to corruption is corrupting. Unless preventive measures are taken, dishonesty can spread stealthily and uninvited from person to person like a disease, eroding social norms and ethics—and once a culture of cheating and lying becomes entrenched, it can be difficult to dislodge.


The science types assembled a group of volunteers to see how and when they would go along with corruption.


...So all participants faced a conflict between playing the game by the rules and behaving dishonestly to earn more. We created this setup to assess how individuals balance external and internal—or psychological—rewards when making ethical decisions. Research that Nina Mazar, On Amir and one of us (Ariely) published in 2008 indicates that most people act unethically to the extent that they can benefit while also preserving their moral self-image—an observation they described as the theory of self-concept maintenance.

Our work suggests that bribery is like a contagious disease: it spreads quickly among individuals, often by mere exposure, and as time passes it becomes harder and harder to control. This is because social norms—the patterns of behavior that are accepted as normal—impact how people will behave in many situations, including those involving ethical dilemmas.

And that may explain the real danger to America posed by Donald Trump, the Great Corrupter, the man who cannot tell the truth. The fish rots from the head down. Corruption is contagious. When a man of sullied principle and degraded intellect sits in the Oval Office it should come as no surprise that he quickly manages to corrupt the other institutions of government to and including the Department of Justice and a "bought and paid for" Congress that no longer serves the American people.
Posted by The Mound of Sound at 10:01 AM

The reason for this debacle is neoliberalism even as its harshest critics concede, neoliberalism is hard to pin down. In broad terms, it denotes a preference for markets over government, economic incentives over cultural norms, and private entrepreneurship over collective action. It has been used to describe a wide range of phenomena – from Augusto Pinochet to Margaret Thatcher and Ronald Reagan, from the Clinton Democrats and the UK’s New Labour to the economic opening in China and the reform of the welfare state in Sweden and so on. Anyong


All true, Anyong, and yet our political leadership of all stripes are faithful disciples to the neoliberal order.

Did we ever live in a world where the politicians practiced what they preached?

That said, was there ever a world where the politicians could practice what they preached?

Politicians can be broken into two groups.
Career politicians; of which there are many.
Honest politicians who soon become disillusioned politicians when they realise that the state is run by those that control the monetary system.