What a Crappy Thing to Do. 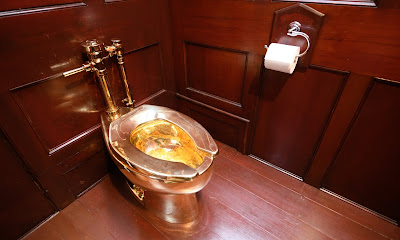 The golden lavatory, named America, drew large crowds when it was exhibited in New York. It had been installed in a wood-panelled chamber opposite the room where Churchill was born.

Blenheim palace is the ancestral seat of the Duke of Marlborough.
Ahead of the toilet’s installation, the duke’s half-brother, Edward Spencer-Churchill, founder of the Blenheim Art Foundation, said last month the lavatory wouldn’t be “the easiest thing to nick”.

“Firstly, it’s plumbed in and secondly, a potential thief will have no idea who last used the toilet or what they ate,” he told the Times. “So no, I don’t plan to be guarding it.”

The toilet, designed by the Italian artist Maurizio Cattelan, had been plumbed in and was available for visitors to use.

I'm familiar with the phrase, "farting through silk," but this is ridiculous.

The palace's chief executive, Dominic Hare, is quoted as being 'relieved' no one was hurt in the burglary. I'll bet.
Posted by The Mound of Sound at 9:50 AM

Has anyone checked the White House washrooms?


It is His favourite colour, Cap.

Well, of course the 18 carat, only 75% gold, toilet is American, commissioned by the Guggenheim Museum from an Italian artist with things weighing heavy on his mind, and was lent to Blenheim Palace for an art exhibition. Churchill croaked decades before this unit was conceived.

From Cambridge News live in the UK:

"The sculpture hit the headlines last year after it was offered to US President Donald Trump by the chief curator of the Guggenheim museum in New York, its former home.

The golden lavatory, on display at the Oxfordshire estate, was designed by Italian artist Maurizio Cattelan, and drew large crowds when it was exhibited in New York

The golden toilet had proved popular at the Guggenheim and has been described by critics as a pointed satire against the excesses of wealth.

Cattelan has previously said: "Whatever you eat, a two-hundred-dollar lunch or a two-dollar hot dog, the results are the same, toilet-wise."

More than 100,000 people made use of its "participatory nature" at the Fifth Avenue museum between 2016 and 2017, making available to the public "an extravagant luxury product seemingly intended for the 1%," said the Guggenheim website.

Guggenheim curator Nancy Spector declined the request but, perhaps with Mr Trump's penchant for all things gold in mind, offered the toilet instead.

A 66-year-old man has been arrested in connection with this incident and he is currently in police custody." With no toilet privileges just in case. 'We borrowed a porcelain underbed potty from Blenheim Palace, and that will have to do him,' a police spokesman said.

"Someone nicked the 18-carat loo"

Yes, exactly the same thing happened to us after our former interior designer insisted on golden toilets in all of our seven bathrooms.

We had to use the silver outhouses.