Wondering Why This Is Such a Dreary, Dull Election? 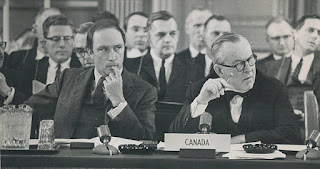 I've spoken with several people who wish "none of the above" was an option on this year's ballot. They know that, come October 24th, Canada will be in the hands of some guy completely unfit to lead the country.

The Tory faithful and the Liberal faithful won't like to hear that but it's true. You've got Justin who came to politics a school marm versus Andrew who has spent most of his adult career as a political water boy. What's not to like there?

It may strike you that these are a pair of very limited intellect and even less vision.

Those of us who have been around a bit longer remember when we had leaders of real stature who make the current crop look like dwarfs. Let's look at one example of the leadership we once had, Lester Bowles Pearson. Check out Mike Pearson's biography (just read it, it's not long)  and then use it to take the measure of Scheer and Trudeau. BTW, there's no shame in weeping.
Posted by The Mound of Sound at 9:34 AM

Just remember ; at the same time we had Pearson ( my personal number one ) we had Diefenbaker.


Other than the Avro Arrow controversy, Dief was not that bad. He was an ardent champion of civil and human rights both at home and abroad.

I used to give volumes of Dief's memoirs to a couple of Tory relatives at Christmas. I would take the books into his office where he would put a nice, personalized message in them.

The problem wasn't getting in to see John D. but getting out. He'd be signing away when he launched into "When I was prime minister...." and he would just keep going - on and on and on.

The fix was to arrange for someone from the newsroom to call Dief's office 15 or 20 minutes later to summon you back for some unspecified matter of great urgency. Then you made your escape.

All things considered he was a nice old guy.

You are, indeed, a cheeky soul, Mound! I like your style....

Leadership and honesty do not go hand in hand.

As for the Arrow; it was yesterday's F35.


"Leadership and honesty do not go hand in hand." Leadership comes in a variety of flavours, TB. I'm not cynical enough to believe that good leadership must be dishonest. Bad leadership, the sort that drags nations into wars and such, can be powerful but inevitably dishonest.


I suppose the point I'm trying to make is that Canada did not become a great nation by happenstance. It took leaders of the calibre of Laurier, St. Laurent, Pearson and Pierre Trudeau - layer upon layer - to build the Canada that we still hold in our imagination. The corollary is that, without leaders of their stature, our nation can regress, lapse into mediocrity which, in my view, is what is happening today. In this time of such grave perils that leaves me with a bitter taste in my mouth.

Elizabeth May excluded all the competing candidates for the leadership of this wonderful country are lying so as to appeal to a wide base of voters.
May can say what the hell she wants as she is unlikely to be the ultimate winner.
The others have an hidden agendas that will not be revealed until sometime after a victory.
We experienced this with Harper and with Trudeau jr.
The liars are often as not subservient to special interest groups that include big business and to a lesser extent big organised labour,
I have more sympathy for big labour as they wish to redistribute the wealth amongst the masses not the few.
That said , in this world, the big money people rule regardless of political party.
The more the big money people win , the more power they have kind of like the inverse square rule!

As for Pearson and PE Trudeau and possibly Joe whatshisname, Clarke we have not seen a politician of calibre that puts Canada first since globalisation made its way into our lexicon.


Neoliberalism ushered in changes beyond anything ever imagined at the outset. The interconnected, global economy transformed politics as vital incidents of national sovereignty were yielded as a condition of trade deals. Governments welcomed the 'invisible hand of the market place' to regulate not just the economy but the public itself. Prime ministers were reduced to technocrats, petit fonctionairres, administrators, grey suits stuffed with wet cardboard. They didn't understand that by giving so much away for so little they were implementing a new economic ideology vastly more tenacious than any before it. And so, here we are, trapped and somewhat powerless as the challenges of this century loom.

One evening in May or June of '63 I went up to the visitor's gallery and was treated to an extended version of the Dief, then having been recently consigned to opposition. Besides some reference to what the Prime Minister had been doing on the occasion of his birthday (the election had been the day before) I don't remember anything that he said, but it was then that I understood what the Germans mean when they say "wie im Fieber sitzen". Whatever it was that Churchill or MLK Jr. had for an audience, this guy had in spades. From that day to the present I insist on one requirement of anyone intent on trashing him. That requirement is that I'll continue to listen to anything else they have to say as long as we can agree that the ranting over the Arrow is out of the way. Invariably that ends it.


He was a rare bird, wasn't he, John? Can you imagine how long it would take him to shred today's political leaders?