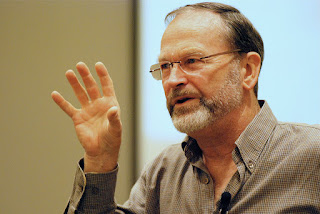 Nobody wants to dwell on this. Fewer still are willing to talk openly about it. It's a chilling conclusion of what our petro-economy has in store for humanity this century.

Some project closer to seven, or more.

William Rees, professor emeritus of human ecology at UBC, has an analysis piece in The Tyee.

One thing the climate crisis underscores is that Homo sapiens are not primarily a rational species. When forced to make important decisions, particularly decisions affecting our economic security or socio-political status, primitive instinct and raw emotion tend to take the upper hand.

This is not a good thing if the fate of society is at stake. Take “hope” for example. For good evolutionary reasons, humans naturally tend to be hopeful in times of stress. So gently comforting is this word, that some even endow their daughters with its name. But hope can be enervating, flat out debilitating, when it merges with mere wishful thinking — when we hope, for example, that technology alone can save us from climate change.

...As much as a decade ago a climate symposium organized to discuss the implications of a 4 C warmer world concluded, “Less than a billion people will survive.” Here Schellnhuber is quoted as saying: “At 4 C Earth’s... carrying capacity estimates are below 1 billion people.” His words were echoed by professor Kevin Anderson of the U.K.’s Tyndall Centre for Climate Change: “Only about 10 per cent of the planet’s population would survive at 4 C.”

Similarly, in May of this year, Johan Rockström, current director of the Potsdam Institute opined that in a 4 C warmer world: “It’s difficult to see how we could accommodate a billion people or even half of that.... There will be a rich minority of people who survive with modern lifestyles, no doubt, but it will be a turbulent, conflict-ridden world.” Meanwhile, greenhouse gas concentrations are still increasing.

Keep in mind that a global temperature increase averaging 4 C means land temperatures would be 5.5 to 6 C warmer away from the coasts. Much of the tropics would be too hot for humans and many densely populated parts of the temperate zone would be desertified. A 4 C warmer world map suggests that as much as half the planet would become uninhabitable. (A ‘4 C world’ assumes business-as-usual or no new climate policies in coming decades. Note, however, that known and unknown ‘feedback’ mechanisms could make 4 C possible, even with new politically acceptable policies in place.)

Yes! Rees joins the ranks of an emerging number of top climate scientists and others to confirm that climate change is an existential threat but it is but one symptom of a much greater human affliction.


We could initiate any number of conversations that end with the self-induced implosion of civilization and the loss of 50 per cent or even 90 per cent of humanity.

And that places the global community in a particularly embarrassing predicament. Homo sapiens, that self-proclaimed most-intelligent-of-species, is facing a genuine, unprecedented, hydra-like ecological crisis, yet its political leaders, economic elites and sundry other messiahs of hope will not countenance a serious conversation about of any of its ghoulish heads.

Climate change is perhaps the most aggressively visible head, yet despite decades of high-level talks — 33 in al — and several international agreements to turn things around, atmospheric CO2 and other GHG concentrations have more than doubled to over 37 billion tonnes and, with other GHG concentrations, are still rising at record rates.

In these circumstances, the only certainty is that the longer we deny reality and delay concerted action, the steeper and deeper the crash is likely to be.

So, where does this leave us? Jonathan Franzen has a suggestion: “You can keep on hoping that catastrophe is preventable.... Or you can accept that disaster is coming, and begin to rethink what it means to have hope.”

Certainly hope is sterile if unaccompanied by vigorous action that reflects looming reality.

This is an election year in Canada. Ask your candidates — sitting MPs in particular — just how much time they have spent contemplating these issues or debating them in caucus.

What is their party’s plan for the coming great unravelling?

We know what the Liberals' and Tories' plan is for the 'coming great unravelling.' They don't have one. Both of them want to expand our petro-economy. Both are committed to the pursuit of perpetual exponential growth, disciples of GDP. They have us on a path that denies reality and delays action, ensuring a gruesome fate for our grandkids and an even worse fate for the peoples of the poorest and most vulnerable nations.

You will never hear Justin Trudeau discuss Canada's responsibility for death and devastation our petro-economy is already inflicting in distant corners of Earth. Add another million barrels of bitumen per day and they'll be falling like flies.

How does that $30 per tonne carbon tax sound now?
Posted by The Mound of Sound at 11:50 AM

How does that $30 per tonne carbon tax sound now?
Shitty, better to ration energy.

There will be no popular solutions to climate change be you big business or living on the street.

The solution will have to be seen as being fair!
Rationing equal amounts of, tradable, energy to the very rich or poor i.e; one man one kilowatt would be seen as fair distribution.
If that homeless guy on East Hastings wishes to sell his share to Jimmy Patterson then so be it.
TB


I think this goes far beyond some homeless guy on East Hastings St. This is a truly global Maelstrom. Countries, especially the advantaged, industrialized world must accept global solutions.

We know that democracy must be restored, rehabilitated, before it's too late. We know that we need a complete overhaul of capitalism and somehow must pry ourselves from the deadly clutches of globalization.

'One man, one kilowatt' sounds just dandy but that's 'one man' times eight billion. How does that sound?

There is no shortage of fanciful ideas but they all have one thing in common. All of them require something we no longer have - plenty of time.

Canada has plenty of advantages that only a handful of nations have. Yet we're doing nothing to take advantage of these 'blessings.' One by one they slip through our fingers, forever foreclosed. We have neither the wisdom nor the courage to act.

Greed cannot be legislated out, it will have to be bred in.
Enjoy the party while it lasts.
Après moi le déluge.