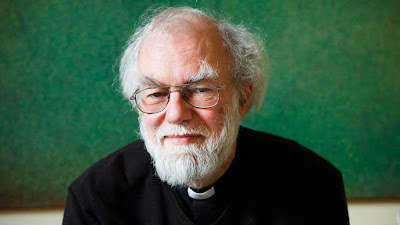 Rowan Williams, former Archbishop of Canterbury, looks at the fires ravaging the Amazon rainforest and sees one thing, mankind's lust for excess.

Whether it's vanishing fish stocks, exhausted farmland, emptied aquifers, or a fetish for trafficking bitumen, it's a civilizational-scale addiction, one that we will not survive. It is as plain as that and the outcome is just as clear.

This is a rainforest that provides one-fifth of the world’s oxygen; it is hard not to feel powerless and despairing in the face of the disaster overtaking the region.

But however strong – and bitter – the feeling about this as an environmental catastrophe, we must never lose sight of the fact that it is also a human tragedy.

We need to listen with intensified attention to the voices of those who call the rainforest home, voices all too often sidelined or deliberately silenced, their stories a mere footnote in global news headlines. We have no excuse for not listening now.

Humanity seems to be dividing into two camps: victims, inevitably the poor and vulnerable; and those who perpetrate their suffering for a quick and fleeting windfall. Best not to get too judgmental about the scoundrels torching the rainforests. Canada is "punching above its weight" when it comes to flooding the world with some of the worst, highest-carbon fossil fuels including thermal coal and bitumen. If you think that's not killing people, rendering their ancestral homelands unlivable and forcing them to seek survival in migration, you'll be wearing that before the coming decade is out.


For generations, the indigenous peoples of the Amazon basin have been the stewards of the forests. Some have literally paid for this with their lives, long before this summer’s fires. These communities have for years been subject to attacks, illegal invasions and deforestation. Their rights have been overridden in the face of the greed of various powerful economic interests, and theirs is a story that speaks of the stark economic inequality blighting and corrupting so much of our world, including countries like Brazil.

...This is not just Brazil’s problem – or indeed that of other Amazon countries like Bolivia and Colombia, which have also been impacted by fire and environmental devastation. All of us are implicated. The global patterns of economic growth, including the unprecedented levels of demand for meat in the developed world, account for much of the pressure on land use in the region. And widespread deforestation in other parts of the world means we are more reliant than ever on the region for our global ecological balance.

The wildfires raging in the Amazon are a visible metaphor for the effect of our unrestrained passion for limitless economic growth. It is this passion that has led to so much deforestation in recent years. It is this that is responsible for the vast majority of the current fires in the region. Brazil’s National Institute for Space Research has published data showing a 278% increase in deforestation this July compared with the same month last year.

It looks increasingly likely that we are at, or very near, a tipping point in our global ecological crisis, a crisis generated by the desire to maximise indefinitely what we can extract from our environment, as if it were no more than a store cupboard to be raided. The Canadian poet Robert Bringhurst writes that “the wild”, the untamed, complex world around us, “is not a portfolio of resources for us or our species to buy and sell or manage or squander as we please. The wild is earth living its life to the full.”

The compulsive acquisitiveness that causes the radical damage we see dehumanises us as well as ruining our environment. The fires are burning in the soul as well.

I understand it's hard to grasp that the very people we'll be supporting at the ballot box this October are those driving us, all of humanity, over the edge of this planetary tipping point. To them the only course is the pursuit of perpetual exponential growth and our degraded world is "no more than a store cupboard to be raided."

Andrew Scheer is Andrew Scheer, as unapologetic as they come. Justin Trudeau says he's different than Scheer but, when it comes to the bottom line for humanity and the planet, it's a distinction without much difference.

One of the reasons we know so much about our ancient ancestors is from the junk they left behind. Humans collect stuff. A tour of any modern suburb finds all sorts of stuff on display. Cars are parked on driveways, lawns and streets because the garage is full of stuff. There are few among us able to travel lightly.


Thanks for the link, Toby. We do seem headed for a world of climate upheaval and our leaders prefer to look the other way.


Thanks, TB. I wish Carlin was still with us.

Carlin will always be with us via the internet.
His vision was/is timeless.

Odd person to be considered a visionary?


Yes, I suppose you're right, TB. His comedic wisdom is/was timeless. I think we always knew there was much truth in his humour, perhaps just not how much.