This Was On the Side of the UN Building 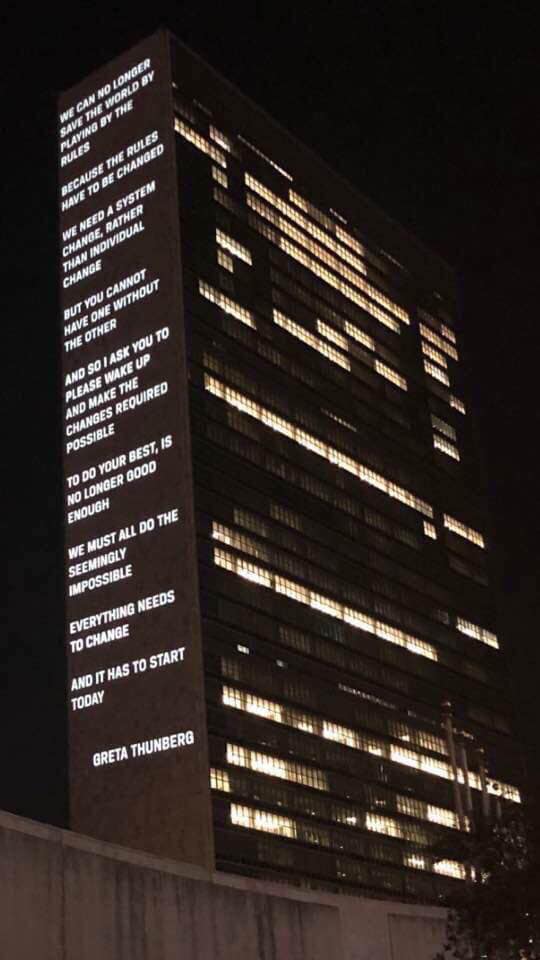 Meanwhile, in tone-deaf Canada, under a Climate Emergency, we have Andy Scheer, Dimwit of the Decade and Social Trend Maker of The Year for 1909, proposing East-West "energy" corridors to include pipelines to distribute dilbit, and Quebec electricity. That excess electricity currently goes to New York State and has since Churchill Falls in 1969. Oh yes, and he plans to use federal prerogative to build pipelines across Quebec. He was quite unable to express himself in an interview yesterday (well he ain't that bright) and when questioned on the Quebec aspect, repeated himself like an automaton with the exact same words he'd used 30 seconds before. Which were to the effect that lots of Quebecers want Alberta oil. Really. Who knew? This is also the weakness of May's similar proposition.

Then out of the blue overnight, some genuine dingbat is proposing a Co-Prosperity dilbit pipeline from Alberta to Saint John, NB. Yes, it's a public-private partnership proposal. You read that right. Golly, let's get Canucks on the hook too, and then we can all get down and dirty, Thunberg be damned. Absolutely fucking brilliant. Some of the dilbit is to be refined in Saint John, this joker says. Gee, maybe he should have asked those penny-pincher stingy as-all-get-out Irvings if they want to upgrade the refinery with decokers. The rest would be exported through that mothballed terminal in Saint John. Right. Non-starter Numbnuts Proposal of 2019, because again, Quebec's opinion isn't asked.

Meanwhile automaton Westerners with standard cotton wool for brains, are saying for the 55th time, why, li'l ole Canada only produces 1.6% of the world's CO2, entirely neglecting our 6m bpd dilbit export output, so we're damn fine people, dontcha know. Scheer saying something to the effect that if all Canadian production of anything/everything was shut down, why China would have us up and running, replacing everything "in 3 or 4 days". Wheat, roo, Andy baby? So why not push dilbit production, eh? Is this dope for real? Yes, unfortunately, and millions will soon vote for his horseshit for breakfast.

You might as well take a 14 pound maul to these Con politicians and give 'em one over the head. Because it wouldn't make any difference. They're poleaxed already. You can't kill 'em off. They're actual Zombies, and like stupidity itself, keep coming back, having learnt bugger all about anything in the meantime. Or ever.

.. Love the projected image.. amazing !!
As far as comment, I believe BM knocked it out of the ball park..

"According to Victor, adapting to a low-growth economy will be complex and demanding, but there will be many compensations, such as not destroying the planet and not driving the rest of the world's plants and animals into extinction. Of course, that was Thunberg's point."