Daring to Speak the "E" Word 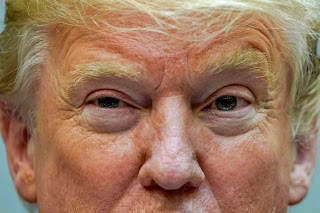 The American media won't use it but it's inescapable. Donald Trump isn't bad, he's evil.

America has an evil president, a man whose every instinct summons evil.

A thoughtful essay from Salon.com by Chauncey DeVega explores the evil at the heart of this animal. It begins with Australian journalist Lenore Taylor's account of how the American media massage Trump's ramblings to present him as coherent, borderline normal.


"In most circumstances, presenting information in as intelligible a form as possible is what we are trained for. But the shock I felt hearing half an hour of unfiltered meanderings from the president of the United States made me wonder whether the editing does our readers a disservice …

"I’d understood the dilemma of normalising Trump’s ideas and policies — the racism, misogyny and demonisation of the free press. But watching just one press conference from Otay Mesa helped me understand how the process of reporting about this president can mask and normalise his full and alarming incoherence."

DeVega concurs that the American media have been complicit in 'normalizing' Trump.


The American media has “massaged” the truth in Trump's favor by waiting almost three years into his presidency to finally describe him as a racist and a white supremacist.

...There is another word that can and should be used to describe Donald Trump. He is evil. By implication, Trump's policies and those who enact and support them are stained by his evil.

The cruelty, the violence, the greed, the selfishness, the racism, the sexism, the nativism, the bigotry, the destruction, the lying, the assault on reality, the contempt for human dignity and civil rights, rejection of the rule of law and democracy, the summoning and mainstreaming of chaos and nihilism and a panoply of other social pathologies are more than the absence of good. They are evil.

At this point DeVega turns to Susan Neiman, a professor of philosophy at Yale and Tel Aviv universities, now the director of the Einstein Forum in Potsdam, Germany.  Her most recent book is "Learning From the Germans, Race and the Memory of Evil."

Neiman also sees evil in this president and eerie parallels between how Trump wields power and the early practices of the National Socialists.


"Donald Trump meets every single criterion for using the word evil — and he keeps meeting it every day. Evil is a word that should be used with caution. ...Unfortunately, the description of “evil” has been so overused that many people just believe that it is a type of name-calling. I disagree. When we relinquish the use of language like “evil” we are leaving the strongest linguistic weapons that we have in the hands of the people who are least equipped to use them."


"What we need to examine and publicly discuss in much more detail and much more often in America, is the beginning. How the evils of the Holocaust came to be, the process. We need to look at the 1930s, that time before Hitler was elected.

"Obviously, these are not one-to-one comparisons between America now with Donald Trump and Adolf Hitler and the Nazis. No two historical events are ever identical. Unfortunately, there are many parallels between Trumpism and the rise of the Nazis and Hitler. The demonizing of minorities, the demonizing of the Other, the telling a lie loud enough and often enough and people will stop caring whether or not it's true. These are fascist tactics."

The moral obligation to fight back, to resist.


"At this moment in time in America and other parts of the world it is incredibly important for all of us to not to feel overwhelmed. We must not surrender. This American nightmare under Donald Trump is going to come to an end in November 2020. However, for Trumpism and this nightmare to end we must act.

"Donald Trump is that thing which everyone was afraid that America really was and is. Trump is Incredibly stupid, incredibly arrogant and just mind-numbingly wrong about everything. Donald Trump has created a sense of enormous shame for Americans who live or travel abroad. In contrast to Barack Obama and his family who are loved abroad and were and are a source of great pride for America, Trump is the opposite."

If you want to explore pre-Nazi Germany, Wiemar, and pre-war Nazi Germany there are two excellent books I'm sure you can find in your library - "They Thought They Were Free, The Germans, 1933-45," by Milton Mayer, 1955 I think - and "Defying Hitler," Sebastian Haffner's memoir of coming of age during Wiemar and eventually getting his wife, a Jew, and their child to safety in Britain.  Reading them brings out parallels between the rise and early years of National Socialism and not just Donald Trump but a substantial segment of the American people also. It is chilling to discover how evil spreads across a country and its people, blankets them and eventually suffocates them.

Trump is not competent enough to create a Nazi-like regime in the USA. He's more the floundering president that leads to worse consequences at a later date. He's the worst sort of mix: John Tyler, James Buchanan, and Andrew Johnson. Bad decisions, indecision, contested cabinet appointments, unclear policy, and infighting with his own party. In some essence, it's fortunate Trump's been incompetent, as it's stymied a more cohesive Republican agenda.

As you wrote earlier, Trump is probably more the bellwether than the instigator. Something worse is following.

I consider the USA to be in flux right now, moving from an era. There's slavery state America, pre-Civil war America, Black Codes America, Jim Crow America, and Drug War America. If history repeats, or at least rhymes, then the USA has simply re-entered an era much like pre-Civil War America, where the very worst of treatment has begun to extend not just from black slaves, but also to anti-slavery and abolitionists, and then just Northerners in general. In modern day consideration, Fossil Fuel-Power has riled up the South to fight with the North in regards to civil rights, academics, healthcare, student dept, and ect.

The cynic in me feels as though the Democrats could win the next election if they elect either Sanders or Warren to represent their party, unless the entrenched interests of the neo-liberals in positions of influence in the Democratic Party preclude both in favour of Biden, who Trump'll trounce easily.

Well, this is a bit muddled. Gearing up for mid-terms and essays right now, so I'm in mulling/free thinking/free association mode rather than coherence mode.


Hey Troy, always good to hear from you. Essays, mid-terms - the memory brings back a flash of panic. It is one of those things we have to get through. Good luck.

I agree that the US is in transition. There's a 21st century Thucydides Trap element to it. A realignment of global power politics that many Americans thought would be their dominion for all time or at least the balance of this century. China ascendant, the US treading water. These transitions can be destabilizing and some historians contend that two out of three end in war.

Meanwhile the United States is as divided as any time since the outbreak of the Civil War. We're developing a similar type of breakdown of social cohesion. With environmental calamities coming on faster than we can ever manage to predict it's a lousy time to becoming apart at the seams societally.

I do, however, accept that Trump is evil. His every instinct gives that away. He's a pernicious sadist with a sociopathic narcissism. I think that qualifies as evil.

Yes I am worried that Trump will be the precursor for a successor with the same instincts but far more capable.

This is starting to sound a bit Biblical, isn't it.

Get back to your books. Good luck, fella. You'll do fine but then again I think you don't need to be told that.

Unfortunately, much of America seems to appreciate it. And worse, much of America is fine with the thugs who come with Trump.. and are also fine being appointed by Trump. I won't bother naming them.. though Mitch McConnell does kinda stand out as an abject failure, obstruction, faker, pretend defender and ultimate loser.. quite possibly revealed as worse than Trump ulimately.. but then they've all bought in, all sold out. Is MaConnell worse than Hannity ? Tough call.. but we're talking about the US Senate colluding with, defending and backing a crook and compulsive liar. At that point the 'water' in the tank is so overflowing.. that perhaps Hannity is just another splash, another log of shite landing in the septic tank. Impeach Trump ? Good luck. McConnell will simply block that and Pelosi knows it. They call it Democracy ? Haha.. I say McConnell goes down in American history as one of its most infamous villains.. along with Trump.. they're both off the chart.. and so are essentially any of their collaborators and enablers.. they bet on 'the short game' there is no long game.. we see down there, what Harper did up here.. Crime ? What crime ? Prove it.. .. .. Unreal eh ! ?


I think what America (and other emerging neoliberals) has shown us, Sal, is that, within every seemingly stable liberal democracy there is a 'sleeper' component of the population that is authoritarian by nature. People like Trump, Bolsonaro, Orban, Erdogan and others tap into that support and, before pro-democracy groups rally to push back, can get established.

We're always ready to slap sanctions on miscreants except these thugs. Bolsonaro doesn't hesitate to stand up before the UN and tell the world that the Amazon is his and he'll fuck with it whatever way and to whatever extent he wants. He'll even burn it down. Sanctions anyone?