"He Shat On the Carpet" 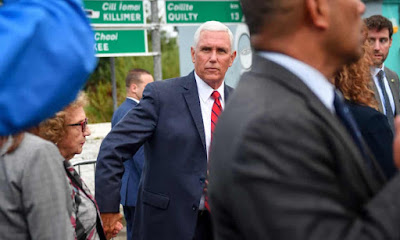 The American vice-president, Mike Pence, is a profoundly stupid man. You could say he's the ideal playmate for America's reality-challenged president, DJ Trump.

Pence paid his respects to his ancestral homeland, Ireland, during a recent trip to Iceland, Poland and the Irish Republic. He took his wife and his mom along and they even stayed at Trump's Irish golf resort during their visit.

It probably shouldn't have come as a surprise that Pence abused the hospitality of his Irish hosts by pitching Boris Johnson's Brexit plan and lecturing the Irish government about their responsibility to negotiate with BoJo "in good faith."

It was all too much for Irish Times' columnist, Miriam Lord:


It came as a shock.

Like pulling out all the stops for a much-anticipated visitor to your home and thinking it has been a great success until somebody discovers he shat on the new carpet in the spare room, the one you bought specially for him.

US vice-president Mike Pence met President Michael D Higgins and Taoiseach Leo Varadkar on Tuesday during an official visit. His Irish hosts, up to their oxters for the last three years in Brexit worry, hoped to impress upon him Ireland’s fears about the consequences of a no-deal Brexit for the country.

...No room left for doubt. As Pence read from the autocue and Irish eyes definitely stopped smiling, it was clear he was channeling His Master’s Voice. Trump is a fan of Brexit and of Boris.

...he veered off his rather gushing statement following his meeting with the Taoiseach into some crunching Brexit remarks about our duty to do right by Boris Johnson and the UK.

As the air in the steamy ballroom turned decidedly frosty, Pence urged Ireland and the European Union “to negotiate in good faith” with the new British prime minister.

The local crowd raised eyebrows and wondered what he thinks the aforementioned EU has been doing for the last three years, if not negotiating in good faith with the UK.

Varadkar’s expression didn’t change. He stood on the platform beside the vice-president and hardly flinched, smiling politely.

Even when Pence made it worse by not only mentioning “good faith” and “Boris Johnson” in the same context but by also requesting his hosts to have “respect for the UK’s sovereignty”, Varadkar maintained a stoic courtesy.

He had to. It’s in the job description for normal prime ministers.

...You can never be too careful. In the end, Pence brought his wife, his mother and his sister to the Old Country, where it seems a lot of the natives have turned alarmingly heathen in the generations since his ancestors left our shores.

His morning began with a trip to the Phoenix Park and a courtesy call on the President.

To look at Mike Pence, with all smiles and handshakes, you’d hardly think he isn’t very keen on the gays at all.

Brave Mike sat down to lunch with the Taoiseach and his partner Matthew and managed not to choke on his Dublin Bay prawns. The VP’s wife Karen, who recently took up a part-time teaching position in a school which bans LGBT pupils and staff, kept her fillets of venison down despite the company.

The next prime minister the couple will meet on their trip will be the serial philanderer Boris Johnson. He’s pretty experienced on the extramarital and premarital sex front, which they abhor.

...“I carry Ireland with me wherever I go,” said Pence, speaking of an old Ireland, one his ancestors left generations ago.

Still, his visit was a great example of diversity in action. President Trump, who recently visited, is very hands-on with women and likes to grab them in all sorts of places. And his second in command is the opposite. He won’t stay on his own with a woman who isn’t his wife.

Trump and Pence are both profoundly stupid men. As lawyer and diplomat Joseph de Maistre once remarked, "Toute nation a le gouvernement qu'elle mérite." Every nation gets the government it deserves.

You really wonder if Pence is even aware of his surroundings -- we know Trump isn't. So uninformed, or so misinformed by the supposedly magnificent State Dept diplomatic staff but more likely just following policy, that he blithely hits all the touch points the Irish are upset about as if that were a good thing. What Ireland thinks is immaterial. The emperor's right hand man come to lecture/soothe the savages in the far-flung provinces of empire. And he from Indiana, hardly in the forefront of anything much except abrogating workers' rights and home of weird religion:

"Pence was raised Catholic, but over the years has “made a commitment to Christ” and claims to be a born-again Evangelist Catholic. He said in another statement that he is “a Christian, a conservative, and a Republican, in that order.” Mike butted heads with the Archdiocese of Indiana over an issue and seems to be increasingly against Catholicism. When he signed the Religious Freedom Restoration Act as governor of Indiana it made him very popular with hardcore conservatives and Evangelists."

A well-read and intelligent man, then.

Jesus, what has led the West to elect fourth-rate numbskulls to rule over us? It's as if the Grade 4 bullies took over the world. Incoherent and unread, heads full of old wives' tales and myths. A lament whose theme I know that many have wondered about for decades, but a lament nonetheless.

For a profoundly stupid man he has accomplished much more in his life than you could ever dream of Mound.

Accomplishments alone are no measure of a life well lived, Anon. Hitler Stalin and Mao were also high-achievers. But like Pence, what they accomplished did more harm than good. History judges them accordingly

Stupid?
I think not.
Willfully ignorant ....
and arrogant enough not to give a sh*t or perhaps he actually enjoys poking the bear.

btw, just for to cheer-you-up ....
"National polls show most of the front-line Democratic candidates defeating Trump in hypothetical head-to-head match-ups. But those are not surveys of Pennsylvania, Michigan or Wisconsin, where Clinton’s losses have haunted Democrats."

and here's the rub:
At this point in 2015 Hillary had was polling 20 points higher than tRump. The current crop of Dems lead tRump by only a few points.

The sort of people that claim to be "Borne Again" are supposed Christians who are the sect of Christianity for people who fxxxed it up the first time around. They believe that redemption will come from following the bible more literally than god would ever wish, to the point which their ideology becomes preachy, dogmatic, authoritarian, domineering, unyielding immoral and many more adjectives could continue endlessly including a superiority over women. Borne-Agains are extremely hypocritical and their misuse of god's texts and discriminatory views give Christianity a bad name. Ironically, it is these people who preach their superiority that makes them such good lairs. And then they have the nerve to look you in the face, after they have just finished bad mouthing gays and other religions, and preach the superiority of their ideology. They love the old testament. Anyong