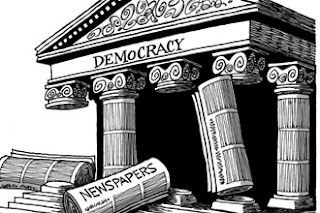 Axios reports that Trump allies are putting together a fund to launch investigations into reporters and editors of the New York Times, Washington Post and other media outlets.


Trump’s war on the media is expanding. This group will target reporters and editors, while other GOP 2020 entities go after the social media platforms, alleging bias, officials tell us.

The group claims it will slip damaging information about reporters and editors to "friendly media outlets," such as Breitbart, and traditional media, if possible.

People involved in raising the funds include GOP consultant Arthur Schwartz and the "loose network" that the N.Y. Times reported last week is targeting journalists. The operations are to be run by undisclosed others.

The prospectus for the new project says it's "targeting the people producing the news."

The irony: The New York Times exposed an extremely improvisational effort that had outed a Times editor for past anti-Semitic tweets. This new group is now using the exposure to try to formalize and fund the operation.

Organizers joke that their slogan should be: "Brought to you by The New York Times."

Under "Primary Targets," the pitch lists:

"CNN, MSNBC, all broadcast networks, NY Times, Washington Post, BuzzFeed, Huffington Post, and all others that routinely incorporate bias and misinformation in to their coverage. We will also track the reporters and editors of these organizations."

More proof that Trump and his minions are Malevolence Personified.

AH, Nazi. They have thrown off the very thin cloak they were wearing.


They are genuinely malevolent, Owen. It leaves me wondering when they will make their move to cement their hold on power.


JM, there are excellent and important books that describe in detail the subtle means by which ordinary people were at first lured and then trapped by these charismatics. It was a process, not of forcing them to act against their will, but of re-engineering will itself.

And... in Canada the CBC has no bias too.
But... only in collective leftists' dream.

Anon 8:11, this is not the place to erect and knock down your straw men. Be off, "be" being the polite option.

All the Good People know it's not True News™ unless it corporate news!

Sure corporation are often guilty of weaving self-serving narratives into op-eds, news stories and even the headlines. But nobody's perfect! Everyone tells White lies from time to time.

Corporations would never REALLY lie to us. Like, I mean, they might incite the people to support corrupt wars from time to time. Facilitate High Born market-manipulation schemes that periodically crash the economy. Provide cover when our Masters of the Universe rape and pillage nations around the world. But nothing serious.

Only fascists call True News™ "fake news." Only fascists are against corporations controlling the media and the government.

Only fascists oppose the West being Babylon the Great that tramples the nations under its feet.

Only fascists oppose turning the world into a global oligarchy that keeps People of Color and workers under the boot of oppression in perpetuity. ("A boot stamping on a human face forever." – Orwell)

Clearly these fascists are real monsters! As the Lord Jesus said, you'll know them by what they do!