Is "Degrowth" Our Future? 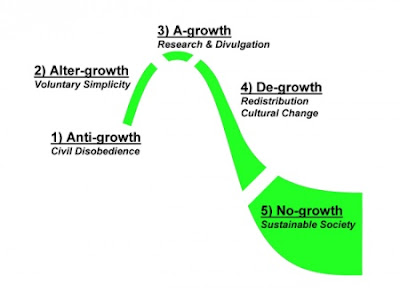 How do we shake our political leadership out of the delusion of perpetual, exponential growth? Three per cent doesn't sound like much. That's what most Western leaders strive for, a seemingly modest annual growth of three per cent. If it's modest it must be okay, right? No, it's dangerous. It's crazy. It has led us to where we are today with one foot still on the cliff edge, the other hanging perilously over the abyss.

Now, for the purpose of our discussion, let's pretend our planet, Earth, is finite. It is, as the kids say, what it is. No more. Let's imagine the economy in Year 1 is one dollar but it's growing by a modest 3% per year.  At the end of Year 100, the first century, the economy has grown to $19.22 per annum. The economy is nearly 20 times bigger than it was when the century began. After two centuries it has grown to 369 times bigger than it was at Year 1. Three centuries and it is now 7,098 bigger than the entire economy of Year 1. Even Adam Smith in his 1776 classic, "The Wealth of Nations," knew that growth couldn't last.

So, you see, you've got to be just a bit mental to believe in what our politicians clamour for - perpetual, exponential growth.

We can't pretend any more. Our planet Earth is finite. There is only so much to support so many of us. There are limits. Adam Smith was right.

Now most people see a wall ahead and they wisely stop. Not us. We smash headlong into it and we've been doing that for a while. That is not a good thing. It's not good for us and it's not doing the walls any favours either.

But surely we can find ways to keep this going. How about that Green New Deal, green growth?  From Euractive.com:


Green growth also has its limits.

“Sure, we can produce cars, iPhones and skyscrapers more efficiently, but we can’t produce them from thin air,” Jason Hickel wrote in the American news publication Foreign Policy.

According to the Guardian’s George Monbiot, trust in revolutionary technologies is misleading.

“In an attempt to avoid climate collapse, what counts is not what we do, but what we stop doing. It doesn’t matter how many solar panels we build if we don’t turn off coal and gas burners at the same time,” Monbiot said.

This is already true because greater efficiency also leads to more consumption, wrote Jaume Freire-Gonzáles in a research paper on rebound effects in the EU. His research concluded that European energy policy needs to be rethought and must aim at reducing energy consumption.

Even clean, renewable energy can't solve our problems. It's absolutely necessary but we consume way too much stuff. We have to go on a diet, what James Lovelock more than a decade ago called "sustainable retreat."  We're consuming the planet's resources at nearly 1.8 times its carrying capacity, slaking our wants by gobbling our way through its reserves. It's like coming home with 1,000 dollars a month and spending 1,800. That doesn't lead to a bright future.


Developments in the sustainable financial sector could also have very positive results, according to Marula Tsagkari. Tsagkari is writing her PhD at the University of Barcelona on renewable energies and degrowth – a concept that calls for a departure from the growth paradigm.

“Degrowth is not only about equating the quality of life to consumption but mainly about coexistence,” Tsagkari told EURACTIV, adding that “society is starting to understand the situation slowly”.

So, what's holding us back? Why aren't we getting on with it?


“We are not yet ready to reorganise ourselves. For this, we probably need a drastic event, a collapse – and that will certainly come if we continue on our current path of growth,” Tsagkari added.

Currently, the gap between international climate targets and actual efforts is growing, according to the results of the UN’s United in Science study, published ahead of the UN climate summit currently taking place in New York.

CO2 emissions from the use of fossil fuels continue to grow – by as much as 2% in 2018, a record. And according to current forecasts, global emissions will continue to rise until 2030 – the target of reversing this trend as early as 2020 is likely to be missed by a wide margin.

One idea being considered is Green Finance. To some that involves restricting access to capital to support degrowth. "Steady State" economists have tossed this idea around for years - an economy in which access to resources is used to reform economic activity. Some call it Green Keynesianism. A good place to start is Herman Daly's 1996 classic "Beyond Growth."

If we're smart we'll ditch this nonsense about growth as the answer to all our problems and the politicians who pitch this snake oil. If we don't, Tsagkari is probably right. We'll just keep going until we trigger a drastic event, a collapse.