He's always known his day of reckoning couldn't be far off. He knew when that day came he would powerfully piss off someone.

That day is just about here and now Trudeau the Younger has to show what he's made of. What's it going to be, fossil fuels or climate change? Unless you're the lowest form of liar you can't pretend to do both.

The decision whether to approve or reject this proposal is now in the hands of Prime Minister Trudeau. It will be his first major climate-vs-fossil test. And it is a doozy.

An analysis of his government's Draft Environmental Assessment Report makes it clear that this decision will force Mr. Trudeau to choose between two of his highest-profile goals:
Meeting Canadian climate commitments
Expanding international market access for Canadian resources

The choice he makes will be a game changer, one way or the other, for the climate fight in Canada. 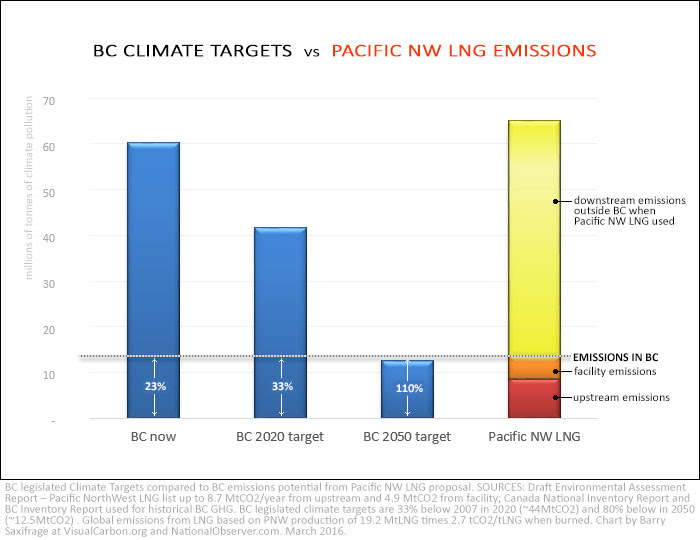 So, Junior, what's it going to be? The West - Wall, Notley and Clark - are waiting and watching and, if you don't knuckle under, you're in for one helluva fight.

Hey old man your arguments might have more impact if you didn't talk down to everyone you disagree with or call them childish names like Junior or Mona.

I hope he makes the right choice, Mound, but based on his adamant refusal to reconsider the Saudi arms deal, I think it is a stretch to expect integrity to triumph over economic expedience.

If I want to use a pejorative, Anon, my favourite is "anonymouse" which, I think, covers you nicely.


Yes, Lorne, I think you're right. Especially when it comes to the Tar Sands Trudeau gives the impression that he's waiting for market viability to take it down, sparing his government an ugly confrontation with the Fossil Fuelers.

From what I understand, currently there's no market viability for PNW LNG.

The LNG project at the port of Saint John NB was officially shut down yesterday, so why a BC one would be more viable is beyond me. No market.


Unfortunately the fossil energy industry doesn't have an "on/off" switch that's governed solely by market conditions. There are collateral considerations whereby in some cases fossil energy will continue to be produced and marketed, even at a loss. Sometimes the anticipation of a better future market is all it takes.

Malaysia is in a bit of a chaotic state right now, politically, due to the President's hilariously blatant and enormous corruption (wikipedia, (ex-leader) Mahathir Mohamad's take).

While Petronas is central to Malaysia, and likely to be politically protected, there could well be a lot of pressure put on the company in the near future. Investments in far-flung British Columbia might go on the back burner.