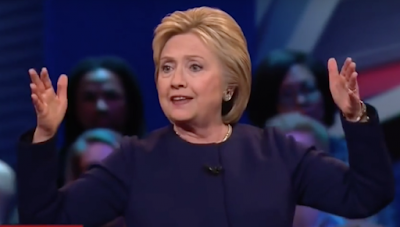 Hillary Clinton will say just about anything to anybody if she smells a vote in it and America's young voters are on to her.

Let's talk coal. Trying to be environmentally-courageous Hillary, Clinton said "we're going to put a lot of coal miners and coal companies out of business." Then she realized that she was in Ohio at a CNN town hall taping. Coal-friendly Ohio where the coal production industry was already reeling.

US News reports that Democrats in the coal states of Wyoming, West Virginia, Kentucky, and Ohio have tried to “distance themselves from Clinton’s comments.” Former Ohio Governor Ted Strickland, a Clinton ally who handily won his party’s primary election for senator, called her slip, “unartful.” Senator Joe Manchin (D-WV), who, last April, endorsed Clinton, took issue with her comments and contacted her campaign.

Facing the backlash, and in damage-control mode, Clinton sent a letter to Manchin: “Simply put, I was mistaken.”

Clinton critics seized on this line from that letter: “Coal will be part of the energy mix for years to come, both in the U.S. and around the world.” Even better, Hillary announced a $30-billion relief package for the coal states which one critic characterized as: “Don’t worry, coal bosses; we’ll foam your landing strip too.”

It's no wonder young American voters don't like Hillary.

Meanwhile, Bill, erstwhile spouse of Hillary, went out of his way to smear Obama:

And here's another American's view of Bill and Hillary:

A big part of Hillary's edge over Bernie Sanders has been the black vote. Bill has done her no favours.

Truly disappointing to watch Hillary unravel during her campaign and the coal "misfire" is only the beginning of her gaffes. Used to really like her until it became so obvious who and what she represents. American politics are truly a site to behold but the one interesting thing is how an angry electorate can rally around a truly awful figure like Trump, imagine what could happen if a candidate actually had some good ideas that would stop the destruction of America's once really great society.

@ BCW - are you referring to Bernie Sanders by chance?