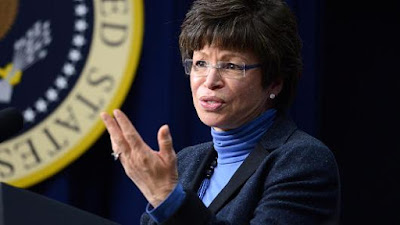 Roseanne Barr's comeback is over. ABC has cancelled the "Roseanne" show after the loudmouth, rightwing nutjob tweeted that a former Obama aide, Valerie Jarrett, was what you get if the Muslim Brotherhood and Planet of the Apes had a baby.

“Roseanne’s Twitter statement is abhorrent, repugnant and inconsistent with our values, and we have decided to cancel her show,” ABC entertainment president Channing Dungey said in a statement to TheWrap on Tuesday.

That's just as funny as any standup she ever did.


She got what she had coming. In reality, she's had something like this coming for years. My only sympathy is for the cast and crew of her show and how they'll be impacted.

I still don't get how anyone could be thrilled over the revival of one of network television's most boring sitcoms.
And one way past its prime even if revived 10 years ago at that.

I didn't care for the original Roseanne, really only like Goodman's character, but thos brief come back had one really good thing and that is its successful first episode was successful enough to revive Last Man Standing which IS funny.

Damn another cliff hanger, just like Sense 8, now we'll never know how the season was going to end.

The really weird thing is Rosanne used to discribe herself as a socialist according to Bill Mahar. You should find his clip on this on youtube, the whole Trump supporter thing coming from her was really weird.


Tal, you pose a question I can't begin to answer.The first time I saw Roseanne, her voice to me was akin to nails on a blackboard. I knew instantly that, if she was my wife, I might wind up doing 25 to life.

The last TV shows I watched on a regular basis were The Hill Street Blues, Cheers, Golden Girls and Soap!!
After that I realised that we had gone much further than entertainment and in to manipulation.

To those that can contribute anything to the Roseanne debacle I must say...

Get a fucking life.

I don't really have any sympathy for the cast. Crew maybe but not cast at all. They knoew who the bitch was before they walked in the door. They proved themselves amoral whores and now they're once again looking for a john/joan. A nice long time out to reflect on their decision making shortcomings is in order as far as this retired actor is concerned.

There's a long history of starving artists being socialists, becoming "libertarians" when they get rich quick, then descend into Nazism when their "privledge" get's eroded.

Nope she, but not some of her cast, will be back, either on Fox or cable. Next time will be more bigoted than before thus normalising "Trumpism".

Cultural-Marxist Puritans think making a bad joke is an unspeakable act of evil. Break out the Scarlet 'R'! Scrub her from history! (Burn her at the stake!)

But when a president goes around mass murdering Muslim civilians across the Middle East sending a flood of millions of refugees into Europe, this is somehow a lesser evil. (If considered evil at all.)

Hillary Clinton called Black youth "super predators" to bolster support for an inner-city po-lice crackdown. (The burgeoning private prison industry was throwing money at politicians for adopting "three strikes legislation.") She created the "era of mass incarceration" stealing the lives of tens of thousands of people – the most racist thing I can think of since Hitler – and this is somehow a lesser evil. (If considered evil at all.)

Funny how an agglomeration of lesser evils appears to produce a banality of evil. And all-the-while the place is lousy with strident moralists!

Let's hope rational-minded people can stop the descent of Western civilization back into Medieval filth. A civilization run by corrupt, incompetent, virtue-signalling, hate-filled, bigoted fanatics is not one that lasts for long, if history is any indication.

Also notice that the holy warrior's gospel of "love" is not only brimming with intolerance and hatred against anyone with a different opinion. These fanatics peddling a pretense of higher values are also viciously merciless.

Roseanne profusely apologized for her mistake. That should've been enough. Why wasn't it? Because religious fanatics who want to impose their nanny-state on society are not looking to make people better. They are looking for animal power and human sacrifice.

Sometimes you can bring civilization to the barbarian. Sometimes the barbarian brings a savage pretense of civilization. One that descends into all manner of hell paved with the purest of evil intentions. If history is any indication.

Well there's the Jordan Peterson canon vomited up in 2 paragraphs.

BTW, the worst, most-savage cultural-Marxist barbarians in the history of the world were the British. They perfected Deep State Fake Christianity. Fake Virtue. A big pretense of righteousness covering up centuries of crimes against humanity. The Anglo-Saxon axis-of-evil is still at it. Never stopped. (No wonder they talk about Hitler so much.)

But there is no White guilt here. This is upper-crust Deep State guilt. They are monstrous where-ever they rule and they rule everywhere.

Only White people have been able to reign them in during the post-war era. Then some semblance of democracy existed. And immense prosperity and human development.

People of Color around the world, however, are used to being under the boot of oppression. In our racist Deep State world. In this colonial and neocolonial old/new world order. (Secular Rome brought civilization to all the empire. Bread and circuses. They weren't conquerors and colonizers. They weren't barbarians. Also Africans lived in perfect egalitarian civilization for 200 kY – prior to the on-going 500-year holocaust unleashed on the continent.)

Constantine destroyed Western civilization back in the 4th century with a perverted form of Christianity. Ancient version of Joseph Stalin and cultural Marxism. And we still haven't found our way out of the Dark Ages. Barbarians wielding technology are still barbarians. It just makes them much more capable of evil and, apparently, more likely of indulging in it.

This abomination we call civilization is really a giant Nazi concentration camp; a mega Soviet gulag; a whopping banality of evil.

The cure is – simply enough – open, accountable, democratic government of, by and for the people. The people aren't going to vote for Deep State raping and pillaging of the globe. They will vote to stop it if it's brought to light.

If the people don't stand up to this tyranny and evil – to these Robber Barons and Liars in Public Places – then what do we have to offer the universe?