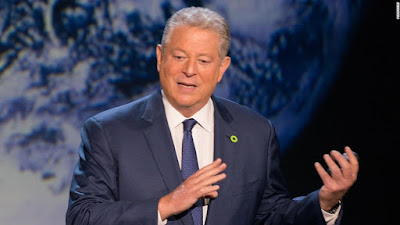 American climate change warrior, Al Gore, thinks the Trans Mountain pipeline is "a step backward in our efforts to solve the climate crisis."


“The Kinder Morgan pipeline carrying dirty tar sands oil would be a step backward in our efforts to solve the climate crisis,” Gore tweeted on Thursday.

He went on to say that he stands with John Horgan, the premier of British Columbia and Gregor Robertson, the mayor of Vancouver, as well as, “all of the Canadians – including the First Nations – who are fighting to stop this destructive pipeline.”

...The $7.4bn project, which still needs to obtain numerous local permits and approvals, would nearly triple the flow of Alberta’s landlocked bitumen to the west coast.

It has been bitterly opposed by some in British Columbia, who point to the impact that a dramatic rise in tanker traffic could have on the region’s southern resident killer whales, a population already on the knife-edge of extinction, as well as the province’s multibillion dollar tourism industry.

Others point to the existing pipeline’s track record; since 1961, the Trans Mountain pipeline has reported approximately 82 spills, with around 30% of those spills occurring along the pipeline’s route.