Social Cohesion is Our Best Hope For a Healthy Democracy 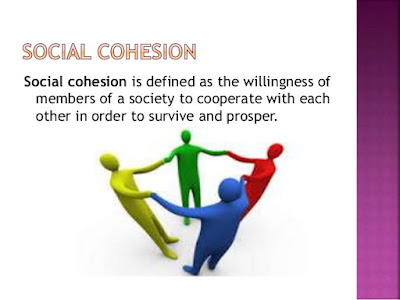 Young Canadians might have no experience of it but there was a time in this country when liberals and conservatives got along. They disagreed, to be sure, but they were both on the same page, they lived in the same reality - more or less. The other team were rivals, not enemies, and they sometimes borrowed (pilfered) ideas from each other.

Now we've got voices preaching hatred of "the other." That other side, why they're evil, vile, disgusting. They're to be feared, distrusted and loathed. It doesn't matter what side you're with, every group has them. And they've been remarkably effective.

What these zealots have achieved is to undermine social cohesion, the force that unites people, makes them stronger, less submissive and vulnerable to authority. Social cohesion is the glue of democracy.

There will always be issues on which people disagree but invariably we agree on far more than we dispute. By building on a foundation of consensus we build trust and a willingness to listen and confidence to discuss and debate. Both sides get heard and, from that act of listening, understood. We may find solutions based on compromise and accommodation that can heal divides.

There is money and power to be had, plenty of it, by those who can divide, confuse and weaken society. The real mischief of globalism is the rise of the corporate state in which narrow, special interests manage to insinuate themselves between the public and those they vote into office.

Globalism demands the surrender of certain incidents of national sovereignty to private sector interests, the ISDS or investor/state dispute settlement regime, being one example. Governments may be restrained from legislating or regulating for the benefit of the public by such means. Jurisdiction becomes shared between government and corporation.

A deeply divided society is weakened, less capable of defending the public interest against the special interest. Government becomes less responsible to the public, more patriarchal. The bond steadily erodes. In some societies it can reach the point where an alienated public fall prey to populist hucksters who feed their discontent and harness it to their own purposes.

My blog, the Disaffected Lib, is dedicated to the restoration of progressive democracy. I really can't see much future for Canada unless we manage to reinstate progressivism, the beating heart of liberal democracy that was pretty thoroughly expunged after the implementation of neoliberalism and the surrender to globalism. Progressivism is the key to restoring social cohesion.

Barack Obama has warned that American democracy and that nation's economy are in peril if the US cannot solve its political divisiveness.

"We live in a culture today where everybody feels the crush of information and the collision of worlds," Obama explained.

This is very different than how our ancestors lived, he pointed out. Humans have, for most of their history, lived their whole lives in the same basic geographic area where they were born, had a network of friends that stretched to maybe 150 people and lived in societies "with very clear rules and expectations," Obama said.

The challenge Americans face today is "how do we maintain that sense of common purpose, our 'in it together,' as opposed to splintering and dividing? As we are seeing in some debates in social media and elsewhere, it's harder to do today. But I think it becomes more necessary than ever, because if we don't figure it out, not only will it be hard for our economy to survive but it is going to be hard for our democracy to survive."

Obama believes that one important way we can maintain and increase a national identity, where citizens view themselves as Americans first, rather than members of a particular tribe (like our political party, or race, or gender) is by sharing stories with each other. The more we can do that, the more we'll see each other as fellow humans, rather than as caricatures representing some other tribe.

One place to start is to ask everyone, no matter where in the political spectrum you fall, to expand your media sources, he suggests.

"Right now part of our polarization is that if you watch Fox News all day, or you read the New York Times, you are occupying two different realities. We have to be able to figure out, in this multiplicity of platforms, to have some common baseline of facts that allow us to meet and solve problems," he said.

A "common baseline of facts." Facts are facts. Beliefs, suspicions and ideologies are not facts. They obscure facts or blur fact and contrivance until the two become indistinguishable. Once facts are adulterated, you're left with narratives that are often irreconcilable, leading to suspicion, distrust and hostility. The separation is complete because the essential bond of fact is broken. Without restoring that baseline of fact we can only drift ever further apart, morphing from rivals into enemies. Then we're lost.

People seem to wish to belong to a winning team rather than face facts.


Just look at the comment section of the press to see how unhinged many become when faced with factual information.


TB, I believe we've developed a pro-am cadre of trolls that beset online news outlets. Some have understandably disabled comments altogether. The vitriol these miscreants spew leaves few wanting to contribute. I wonder how many of these jackals actually live in their mom's basement.

Anon, these comments are off-topic drivel. I'm just going to delete them.

Dear editor , i have been a reader for some times , and i am quite amazed that you seem to run a round the truth and never into it . Your problem now seem is that the Progressive movement has won , freedom and liberty ( from religion , social , economic and political of the past) has reached it full zenith . We now live in the age of the individual .

The problem now is some individual ( special interest) are too powerful . The failure (the environmental mov. ) can be explained by too powerful individuals .

What you are trying -dear editor - in "restoring" progressive democracy , is a return to a version you like ( like downgrading your software ) . Neoliberalism is in fact the ultimate end point for progressive mov . The individual is liberated and left for his /her own agency . Obama "sharing stories with each other" has another name called socialisation , which what you need in individualistic world .

Your last paragraph is one of those ironic statements . A "common baseline of facts." Needs a common baseline of shared believes , value and ideas about the world . Fact are fact is true in materialistic way (earth is a sphere -and there are a people who dispute even that). Now whether Abortion is a pro-life or pro-choice is a fact according to the beholder .In the past Fact in human domain is shared believe , those who stray far from it called idiots , insane or worse heretics and infidel . Which why we "progressed " from it . You now have the choice about what to believe (virtue of progressive ) . And of course what to consider fact .

Finally there are no moving forward any more for the progressive , they simply hit the wall, the individual . And as you can't liberate the individual from himself without infringing on his individuality there are no new progressing than that , This is why the right now look like the renegade and the rebel and the most with intellectual exploration to try to understand the current world ( with a lot of the usual ) .


Anon, you're right off the wall.

"Fact in human domain is shared believe , those who stray far from it called idiots , insane or worse heretics and infidel . Which why we "progressed " from it . You now have the choice about what to believe (virtue of progressive ) . And of course what to consider fact ."

Fact is not shared belief unless you're one of Trump's Gullibillies. Fact is knowledge, information. It is not belief-based. That you plainly cannot grasp the distinction undermines everything you write.

Here are some references that might clear your mind.

I list these not to belittle you but in the sincere hope they will help you.

Trailblazer has it exactly right. The right wing in America nowadays don't want the truth. They just want to think they are winning for once. When you bring up anything factual they resort to name calling, trolling, or whataboutism. The only way Donald Trump voters will wake up is when ....grandma has to move back in with them because medicaid cuts have made her assisted living too expensive. When their families health care costs go from 2500$ a year to 14,000$ then they will see Trump for what he is. When their tax bills start going up in 3 years under the Trump Tax plan and the billionaires get more billions they will finally see the true face of their saviour. How a man who lives in a golden tower and spent his life stiffing the working man convinced dirt poor people he was on their side is beyond me.